10 Things Not to Do When Training Your New Puppy, According to Experts 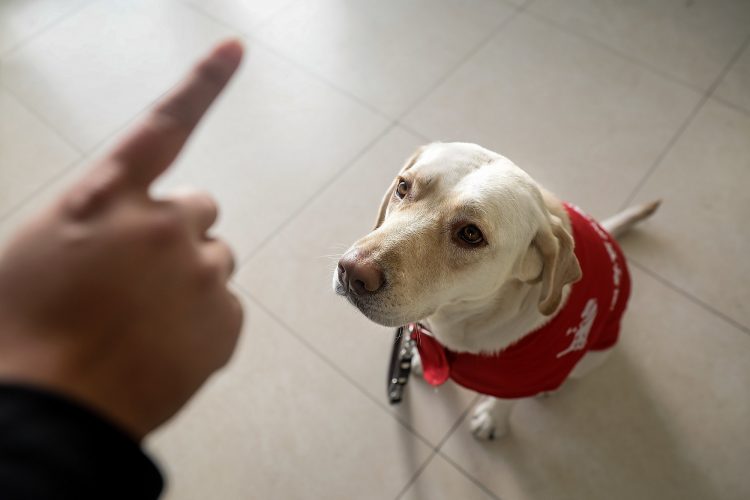 Most people have the best intentions when training a new puppy, but there are some common traps that should be avoided if you want an obedient four-legged friend.

When lockdowns were brought in last March, many people searched for a comforting companion to buckle down with, prompting an increase in puppy purchases and adoptions. A total of 3.2 million households in the U.K. have acquired a pet since the start of the pandemic, according to the Pet Food Manufacturers’ Association.

Many new dog owners will embark on dog training with all the right resources, but it can be confusing to keep up with the sheer amount of advice offered by books, blogs and dog experts.

If you’re not fortunate enough to hire a trainer, or if the pandemic has halted puppy classes in your area, there are simple tips you can follow for best results.

There’s a knack for using command words such as “sit” “stay” and “come.” Although it’s important for your dog to master these basic skills, the trick is not to repeat words too many times in a row or they might lose their meaning.

The American Kennel Club (AKC) coined a name for this problem: “command nagging.” Experts explain that if you repeat a command such as “come” several times when your dog isn’t initially paying attention, then you could end up creating a new pattern.

Your puppy might start only responding to the words when said over and over – for example, “come, come come”. To avoid a mouthful at the park, the best method is to wait until you’ve captured your dog’s attention and then utter the command once.

Although it’s tempting to give your dog a big hug before you leave the house, and an enthusiastic greeting on return, this can reinforce bad behavioral patterns.

Puppies can be triggered when the door is used, and this can cause encourage a habit of barking to be prone to barking later in life. You can still be happy to see your puppy, but try and wait a few minutes until they’ve calmed down to shower them with affection.

Although puppy training classes have largely been disrupted due to various lockdowns in the pandemic, it’s imperative to keep up regular training.

Just like any activity—be it running, piano-playing, or speaking another language—practice is key.

Training little and often in between sessions works a charm. According to trainers at the AKC, dogs have the mentality of a human toddler, so their attention spans are just as short. For most puppies, they recommend 5-to-10-minute sessions daily.

Bad moods are natural, everyone has them. However, they have no place in puppy training. It’s easier to become impatient with your puppy when you’re hungry or tired, or still have work on the brain.

But this creates a hostile environment for your dog, making them reluctant to obey orders straight away. Instead, take a breather and resume training later in the right headspace.

Puppies start to get their teeth at around two weeks old, and by twelve weeks their permanent teeth have begun to erupt. Like babies, the teething process sees your puppy chomping on whatever it can get hold of. Sure, it’s frustrating if it’s your favourite pair of sneakers or an expensive sofa get ruined, but some owners turn a blind eye towards biting when their puppies are small.

You may think small, playful nips are harmless when young, but these will be sharp and painful when the dog is fully grown. It’s best to break the habit early on.

Your dog needs a comforting, cosy spot, which is when a crate or kennel comes into play. However, it’s important to reserve this space for nighttime, or naps.

Despite the old saying, your puppies should never be “sent to the dog house” for no reason. All this will do is cause the dog to associate his kennel with punishment.

You should remember though to keep your dog in a safe area when you leave the house, so as not to find havoc unleashed when you return home.

It can be easy to be caught up in the excitement of getting a new furry friend and let all structure go out of the window.

It’s wise to devise a routine from early on, as the earlier you train your puppy the easier it is for them to pick up basic commands. Advice from VCA Hospitals recommends starting from eight weeks old, with simple skills such as sit, down, stay, and come.

Just like humans, puppies need to learn moderation too.

Leaving treats for puppies to graze on all day will create difficulties down the line with housetraining. By sticking to regular mealtimes, you’ll regulate your dog’s digestive system.

According to the AKC, you should give your puppy four meals a day up until the age of 4 months, and then reduce their feed to three meals a day until they are 6 months old.

Dogs need to stay in shape, so managing their food intake can deliver health benefits. Plus, if your dog hasn’t much of an appetite, it’s a way of seeing that it gets all the right nutrients so it can thrive.

The moment of victory when you teach your dog to obey a command can easily unravel by making this simple mistake. If you accidentally associate a behavior with something your dog views negatively, it can stop responding.

For example, you’ve finally taught your dog to “stay,” but next, you use it to put them on the lead—which they resent. The next time you try out this command you could be met with resistance.

This isn’t to say these commands should never be uttered. But they should not be used in conjunction with the activity your dog is adverse to, at least at the beginning.

Remember that the best results come with time. Julie Tottman has been rescuing and training animals for the movies for more than two decades, with credits including Game of Thrones, Harry Potter and 101 Dalmatians, among many others. She told Newsweek, patience is the golden rule:

“You can’t really go on to the trick training until you’ve done what we call the foundation training. Because if you’re trying to get the dog to do a trick, but they don’t know how to just stay in one spot, then it will take you forever. So, don’t rush it.

“Once you start with the easy stuff, they start understanding the concept of learning and training, and then everything else moves on quicker. The first part takes a bit longer but it’s important that you do it. It’s the boring part of training but you have to do that to be able to move on.”