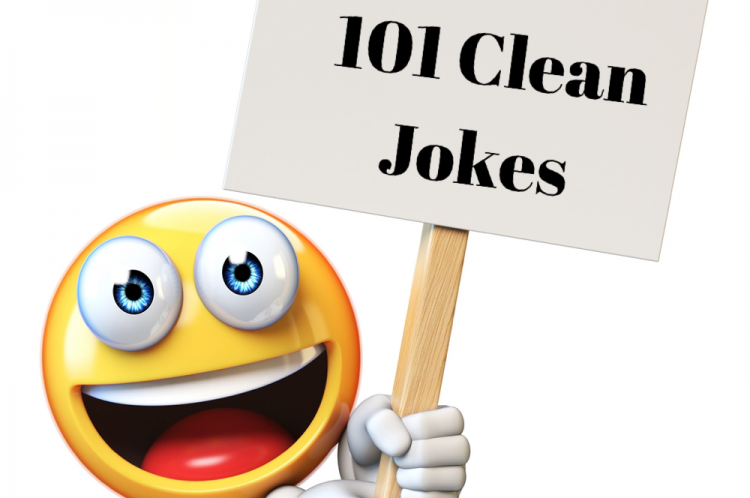 Funny clean jokes make every conversation better—whether you’re sharing a laugh with a friend or entertaining your kids—and these G-rated jokes are no exception.

From the best clean jokes for adults to clean jokes of the day, this big list has something for everyone, so you can feel good about busting out these hilarious SFW funnies, no matter who it is you’re talking to—from your grandma to your coworker.

Read on to discover the best clean jokes that promise a whole lot of giggles for both adults and kids alike.

1. There’s a fine line between a numerator and a denominator. (…Only a fraction of people will get this clean joke.)

2. What do dentists call their x-rays?

3. Did you hear about the first restaurant to open on the moon?

It had great food, but no atmosphere.

4. What did one ocean say to the other ocean?

Nothing, it just waved.

5. Do you want to hear a construction joke?

Sorry, I’m still working on it.

6. Did you hear about the fire at the circus?

It was in tents!

7. Why do ducks have feathers?

To cover their butt quacks!

8. What’s the difference between a hippo and a zippo?

One is really heavy and the other’s a little lighter.

9. What does a nosey pepper do?

It gets jalapeño business.

10. Why should you never trust stairs?

They’re always up to something.

When it becomes apparent.

12. Why did the bullet end up losing his job?

13. What kind of shorts do clouds wear?

14. I entered ten puns in a contest to see which would win.

No pun in ten did.

In inches—they don’t have feet.

16. Where does a waitress with only one leg work?

18. Why are toilets always so good at poker?

They always get a flush

19. Why is Peter Pan always flying?

Because he Neverlands. (I love this joke because it never grows old.)

20. You heard the rumor going around about butter?

Never mind, I shouldn’t spread it.

21. Two windmills are standing on a wind farm. One asks, ‘What’s your favorite kind of music?’

The other replies, ‘I’m a big metal fan.’

22. The first rule of the Alzheimer’s club is…

Wait, where are we again?

23. I took the shell off of my racing snail, thinking it would make him faster.

But if anything, it made him more sluggish.

24. What do you get from a pampered cow?

25. How does NASA organize a party?

26. What’s the best thing about Switzerland?

I don’t know, but the flag is a big plus.

27. You know, it was so cold in D.C. the other day, I saw a politician with his hands in his own pockets.

28. How many tickles does it take to get an octopus to laugh?

29. Why doesn’t Dracula have any friends?

Well, honestly, he’s a real pain in the neck.

30. My teachers told me I’d never amount to much since I procrastinate so much.

Because there were a lot of knights.

32. What gets wetter the more it dries?

They don’t have the right koala-fications.

34. You: What cartoon mouse walks on two feet?

You: What duck walks on two feet?

The first one’s on the house.

37. How much teddy bears never want to eat anything?

38. Did you hear about the cheese factory that exploded in France?

There was nothing left but de Brie.

39. Where should you go in the room if you’re feeling cold?

40. I can never take my dog to the park because the ducks keep trying to bite him.

I guess that’s what I get for buying a pure bread dog.

42. What did the Buddhist ask the hot dog vendor?

“Make me one with everything.”

43. You know why you never see elephants hiding up in trees?

Because they’re really good at it.

The bartender says, “Why the long face?”

45. How did the hipster burn his mouth?

He ate his pizza before it was cool.

46. What do you get when you cross a dyslexic, an insomniac, and an agnostic?

Someone who lays awake at night wondering if there’s a dog.

47. As a scarecrow, people say I’m outstanding in my field.

Because it scares their dogs.

50. I stayed up all night and tried to figure out where the sun was.

Then it dawned on me.

51. I told my friend ten jokes to make him laugh.

Sadly, no pun in ten did.

52. I couldn’t believe the highway department called my dad a thief.

But when I got home, the signs were all there.

53.Why did the cowboy get a wiener dog?

He wanted to get a long little doggie.

54. Can a kangaroo jump higher than the Empire State Building?

55. What did the duck say when it bought some lipstick?

56. George Clooney, Leonardo DiCaprio, and Matthew McConaughey get together to make a movie.

The horse replies, “Sure.”

But for some reason, all that came up were pictures of my parents fighting.

When do we want them?

60. I tried to win a suntanning competition.

But all I got was bronze.

61. How much space will be freed in the EU after Brexit?

62. Why don’t seagulls fly over the bay?

Because then they’d be bagels.

63. What do you call malware on a Kindle?

64. Did you hear about the painter who was hospitalized?

The doctors say it was due to too many strokes.

Because they’re all shellfish.

You go on ahead. I’ll hang around.

Put a little boogie in it.

72. I’ve been trying to make a sarcastic club, but it’s been really hard to tell if people are interested in joining or not.

73. And the Lord said unto John, “Come forth and you will receive eternal life.”

But John came fifth and won a toaster.

75. My wife accused me the other day of being too immature.

I told her there were no girls allowed in my fort.

76. Someone stole my mood ring yesterday.

I still don’t know how I feel about that.

77. A Roman legionnaire walks into a bar, holds up two fingers and says, “Five beers, please.”

78. I tried to catch fog yesterday.

79. Working in a mirror factory is something I can totally see myself doing.

80. Someone stole my Microsoft Office and they’re gonna pay.

You have my Word.

It doesn’t matter, it’s not going to come anyway.

82. You know what they say about cliffhangers…

83. Why does a chicken coop only have two doors?

Because if it had four doors, it would be a chicken sedan.

85. I got a new job last week as the new top dog at Old MacDonald’s farm.

86. The sky was looking ominous so I asked Siri, “Surely, it’s not going to rain today?”

And she replied, “Yes it is, and don’t call me Shirley.”

That was when I realized I’d left my phone on Airplane mode.

87. Why did the giraffe get such bad grades?

He always had his head stuck in the clouds.

88. Why are frogs always so happy?

They eat whatever bugs them.

89. Whenever you jump on a trampoline, did you know it changes the season?

No matter what time of year, it always becomes spring time.

90. Why didn’t the skeleton go to the dance?

Because he had no body to go with.

91. What do you call a musician with problems?

92.Where do snowmen keep their savings?

93. What do you call a religious person who sleepwalks?

94. Did you hear about the carrot detective?

He always got to the root of every case.

95. What washes up on very small beaches?

96. What did one elevator say to the other?

I think I’m coming down with something.

97. What happened when a faucet, a tomato, and some lettuce ran a race together?

The lettuce was ahead, the faucet was running, and the tomato was trying to ketchup.

A waist of time.

It saw the salad dressing.

100. What did the grape do when it got stepped on?

It let out a little wine.

101. Why won’t skeletons fight each other?

They just don’t have the guts.