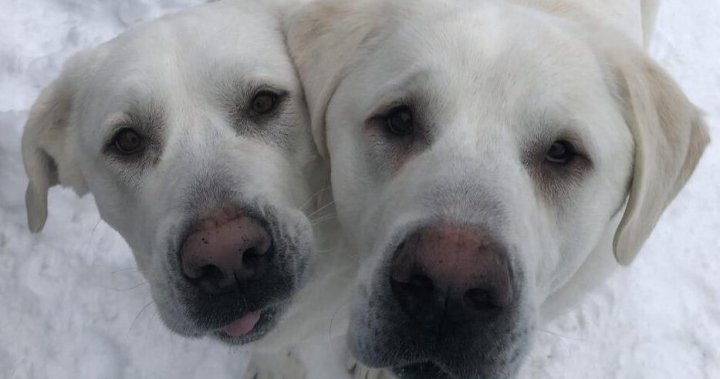 Two large dogs that were dropped off at a B.C. SPCA branch are proving to be impressive fundraisers.

According to the animal aid agency, Captain and Maria are a tightly bonded pair, but were starving, skinny and nervous of people upon arriving at the Shuswap branch.

The two Akbash dogs also needed medical assistance, with their costs pegged at around $3,000.

Read more:
Funds pour in to BC SPCA for two kittens in need of life-saving surgeries

As of Friday, a medical emergency fund page set up for the two showed donations of just over $30,000 – more than 10 times the amount needed.

The B.C. SPCA says those extra funds will go towards helping other animals in need of medical assistance.

“It was clear their life so far has not been easy and that the two Akbash dogs had not seen the kindest that humanity has to offer,” the B.C. SPCA said.

“We can’t recall seeing a more bonded pair of dogs, they are completely inseparable to the point that they have been dubbed the ‘married couple’ at the branch. One won’t walk without the other, if you take one out, you take them both or no one is going anywhere.”

0:34
BC SPCA urging residents to remove bird feeders due to deadly salmonella outbreak

The B.C. SPCA says Captain’s left eyelid will need surgery, as it’s partially inverted, which is causing his eyelashes to painfully rub against his eye.

He also has a sprained cruciate ligament in his back leg.

Meanwhile, at just two years old, Maria is in need of extensive oral surgery, including extractions. She’s currently on a soft food diet to help ease her discomfort.

3:53
Book raising awareness for improved lives of horses saved through BC SPCA

Book raising awareness for improved lives of horses saved through BC SPCA – Jan 3, 2021

“Branch staff and volunteers absolutely love these two. They quickly realized that we were here to help them, and their personalities started to shine through,” said the B.C. SPCA.

“Combined they are 300 lbs, but they are completely unaware of how big they are. They think they are lap dogs and will snuggle up as close as they can get.

“They have become so affectionate and enjoy lazing around wherever people are, watching staff go about their day.”

The B.C. SPCA says once the dogs heal from surgery, a search will begin for their new forever home.

1:49
BC SPCA warns about dangers of home-neutering