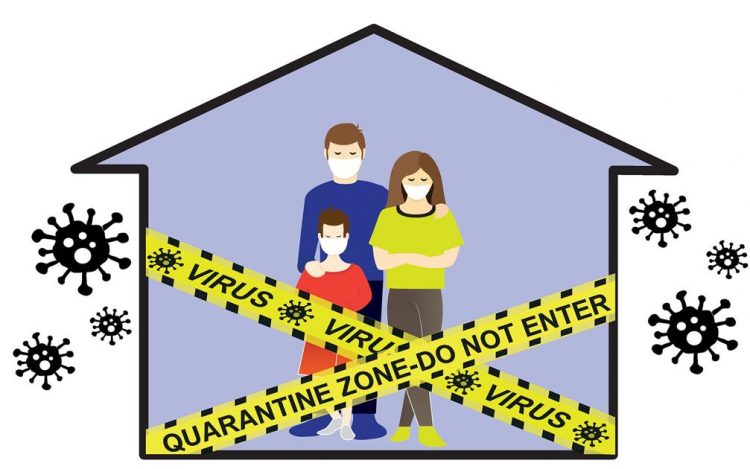 Like most of you, my family handled the 2020 COVID-19 situation the best we could with grace and determination, while using all the time together at home to strengthen our loving bond as a family.

We’ve spent 2020 whining, fighting, bored and complaining. We briefly considered using a True Value insert as toilet paper and drove each other up the wall so often we could get a chauffeur’s license.

We did our best to comply with heavy- hand ed rules dictated to us from government officials, but the constantly changing mandates were confusing.

One day you could dine at a crowded restaurant.

The next day you had to bathe in Purell and don a hazmat suit before going to the mailbox.

In April, we got yelled at by a lady for the unpardonable sin of forgetting the condiment aisle at Safeway was a one-way thoroughfare.

At one point, (during Code Level “Chartreuse”), you couldn’t go to church, unless the church doubled as a vital, extremely essential business, such as a tattoo parlor.

It was all because of a disease from Wuhan, China, which we will NOT call the “Wuhan virus” or even the “China virus,” lest we be accused of being racist scum.

For our purposes, we’ll simply refer to it as, say, the “Pocatello, Idaho, virus.”

It didn’t personally impact us until March 12, when our spring break trip to Disney World was canceled 48 hours before departure.

Compared to many, this is a minor problem to be sure, but YOU trying telling a heartbroken little boy and girl the dream vacation we planned since basically their conception was canceled because some guy 6,891 miles away developed a taste for bat.

At least our transition to remote learning was smooth. Our kids embraced it on day one:

“Yay! What a fun adventure!” was their attitude. They were excited and focused.

Then came the afternoon.

But I don’t blame them. Especially my very social 11-year-old daughter. It’s hard when you’re used to school friends, recess and fun, and suddenly you’re quarantined, stuck at home with a little brother. Your only potential date for the middle school dance is the 8-year-old who shoots Nerf bullets at you.

Since hair salons were closed, my wife cut my hair for a while, until we realized it was just too expensive to spend all that money on things like special scissors, clippers and divorce attorneys.

What else have we done?

Watched a lot of TV. That’s what. Which meant we subjected ourselves to an unrelenting parade of commercials, all along the lines of:

But we didn’t see much of those, either, having turned off the TV in June to avoid witnessing endless news accounts of people fighting for racial harmony by means of looting a Best Buy.

Fortunately, the riots slowed down since they got rid of the Aunt Jemima bottles. I’m just afraid that we, as a society, won’t achieve true social justice so long as Mrs. Butterworth’s remains in our syrup arsenal.

The Pocatello, Idaho, virus caused traditions to fly out the window: Easter, graduations, JUCO. The Grand Junction Rockies canceled its season, which meant we didn’t have any professional minor league baseball.

The few Colorado Rockies games I watched showed us we didn’t have any professional Major League Baseball, either.

I started playing golf again. This was an unfortunate development to those of you who live next to Lincoln Park. Or those who drive on North Avenue. Or for anyone who parks in the VA Medical Center parking lot. Or for those who…

Summer came, and with the Lincoln Park and Fruita swimming pools closed, I ventured out to Walmart to buy one of those Chinese-made blow-up pools for the kids. I always get the one boasting of the “sturdy, durable, liner,” which is guaranteed not to puncture for at least eight days.

But even those were being hoarded. An Amazon search for pools was equally fruitless. You’d think if a country was going to unleash a deadly virus on us, they’d at least have the decency to ramp up inflatable pool production.

Thanks a lot, Pocatello, Idaho.

Suffering from both cabin fever and wanderlust, we flew to Florida in July, which happened to coincide with that state’s COVID-19 surge.

At least rates were cheap. It turns out there is an inverse correlation between Florida hospitalizations and Southwest fares.

We stayed at a clean, sanitized Holiday Inn in Panama City, but given the reaction from some family members, you would have thought we were licking doorknobs at a truck stop bathroom in Calcutta.

Back in Grand Junction (during Code Level: “Sapphire”), we hiked. What else was there to do?

One Saturday, we headed to Serpents Trail in Colorado National Monument. Based on the full parking lot and cars parked all along and down Monument Road, every single resident of Mesa County had the same idea.

It was a lengthy trek, with frequent stops for rest and water, but after a while, we eventually made it to the trail head.

By this point, we were extremely tired of this new normal, and of people who used the phrase “new normal” in sentences. It didn’t seem like we had anything to look forward to other than an exciting season with our new and improved Denver Broncos.

We adopted a dog. Twenty-two hours later, we returned a dog. (It’s a long story.)

We adopted a hamster, which we’ve kept. For now. The kids love her, but if she insists on running on that noisy wheel at 2:37 in the morning? Well, let’s just say I still have the receipt from PetSmart.

Come autumn, (Code Level: “Burgundy with hints of Peal”) we road-tripped to the Great Sand Dunes National Park and Preserve, which was, to be honest, underwhelming.

“Great?” Not really. It should probably be called the “OK Sand Dunes National Park,” but that probably wouldn’t be good for marketing.

On our way to the Royal Gorge, out of curiosity, we stopped at the entrance to the SuperMax prison in Florence. I wanted to show my 8-year-old son what happens to people who don’t make their beds.

Visits to federal prisons aren’t typically a big part of our vacation itinerary, but it seemed fitting this year. I think I wanted to see the only place in Colorado with a stricter lockdown than us. Then again, the inmates are encouraged to go outside for an hour a day, so you wonder.

Like you, we longed for a simpler time. A time when someone sneezing in your vicinity wouldn’t cause you to rush home and update your will. A time when my kids had friends not biologically-related. A time when you would go into a bank without a face covering, see someone in a mask, and call the police on them. Not the other way around.

Fortunately, this will all be over soon. A vaccine is here, and spring will see busy pharmacies and doctors’ offices. There will be more people with needles in their arms than a Seattle homeless camp.

Until then, my wife and I will continue in our roles as kid playmates and camp counselors:

“Sorry honey. I know you’re bored. Don’t worry. You can play with friends in April.”

Which is when experts think we’ll begin to return back to normal. Upon which we’ll see a pent-up demand for human contact and travel the likes of which have been unseen in history.

We will finally go to Disney World, sporting events and busy restaurants, and we’ll even go to our in-laws’ house without complaining (too much).

Because if anything good has come from this virus, it has made us realize life is short. We need to get out there and live, love, laugh and see the world. The entire world.

Except for maybe Pocatello, Idaho. I hate that place.

Pet of the Week: Sugar Cookie is a shy mixed breed dog, looking for a home | Local News