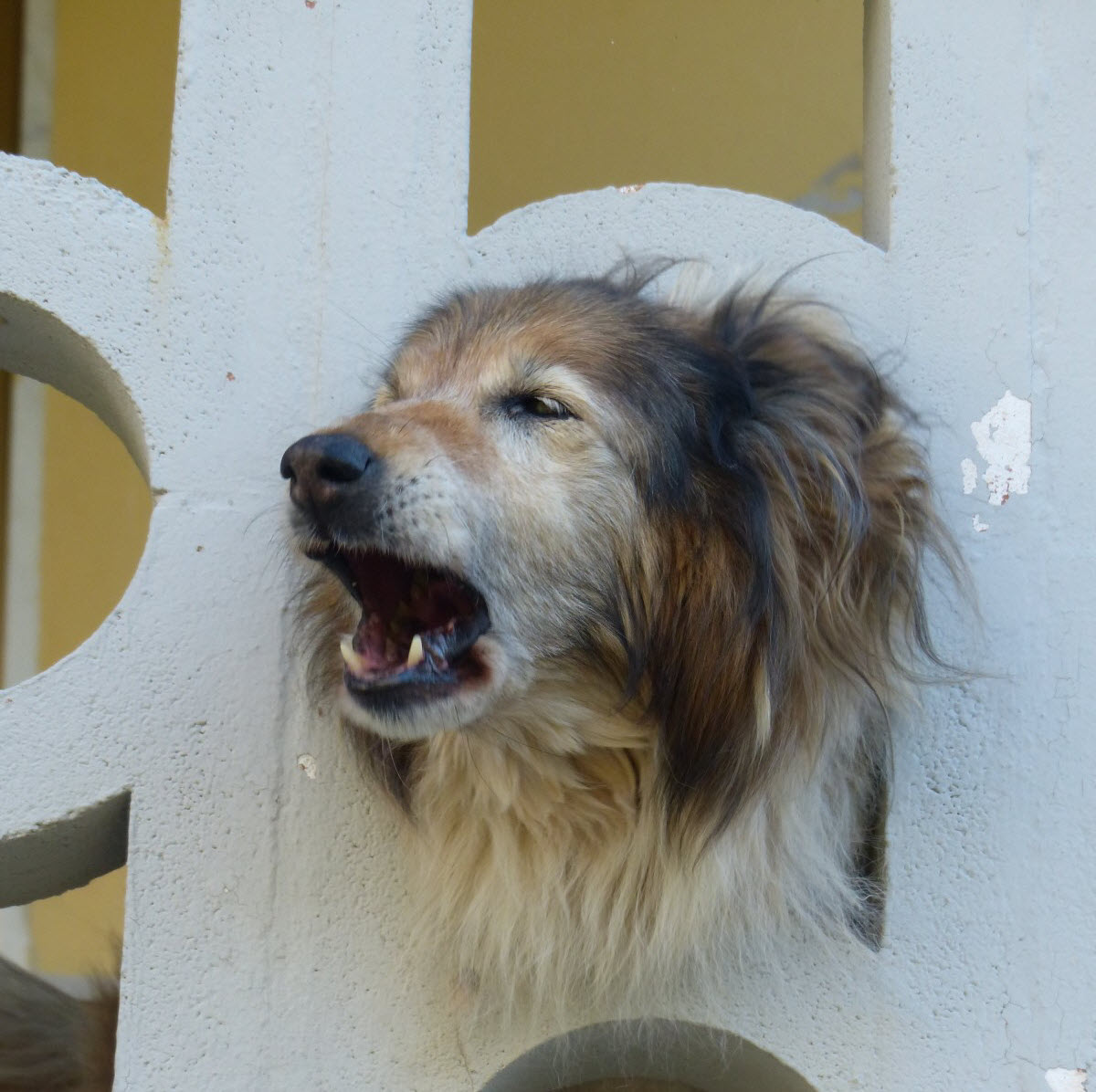 1. How To Stop A Dog Growling If you are a dog owner, no doubt you love your pet dearly, but perhaps you have some behavioral problems with him or her. One of the most common problems with dogs is growling — or, rather, the fact that you want to stop dog growling.What is dog growling, and how do you stop dog growling?Keep in mind that first and foremost, growling is a means of communication for your dog. So, you don’t want to take away his or her ability to growl altogether; you just want to control it when it is behaviorally inappropriate.Most common situations where dog growling occursDog growling occurs most often when your dog feels threatened. For example, maybe you have young children in the family and they move very quickly and in ways that the dog can’t anticipate, so that he or she feels threatened.Or, perhaps you’re taking your dog for a walk and your dog comes upon an unfamiliar dog that is larger than him but in no way menacing; the other dog is simply strange to him or her. That’s another situation where your dog may growl.Stopping inappropriate growling behaviorAgain, remember that there are going to be certain situations where it is very appropriate for your dog to growl. So when you stop dog growling behavior, you’re not going to want stop it altogether; you are simply going to want to control it to the point where it doesn’t happen in what should be innocuous situations.Respect goes both waysIf you have very small children and the dog feels legitimately threatened because he or she may be injured (unintentionally) by the child, that is a time when it may very well be appropriate for the dog to growl. Growling is a means to warn the child that he or she is being too rough, and this should be respected, such that the child backs off and leaves the dog alone. If you stop the dog from growling, he or she may resort to other more injurious responses to the rough behavior, like biting, to warn your child to stay away when he or she is being too rough. Of course, you don’t want that.In this case, you need to instruct your child to move away from the dog when he or she begins to growl, so that the dog can feel safe once again.When growling occurs in innocuous situationsIf a dog begins to growl simply as a matter of course in safe situations (like when a calm person approaches him or her, or when a doorbell rings, or when your child is being perfectly appropriate and calm), this is something that does need to be controlled. The dog must know that while growling will be respected in times of unsafe or dangerous circumstances, growling “just because” will not be.First, of course, you should take your dog in for a complete physical if he or she does not normally exhibit this type of behavior. It could be that there are hormonal imbalances, allergies, health problems, aging difficulties, etc., that put him in pain or discomfort and that have nothing to do with the so-called growling “triggers.” Take care of the medical problems, and you should see that the growling problem will go away by itself.If nothing is found physically wrong with your dog, then it’s time to address the inappropriate growling behavior itself.Remember that you are the “alpha” dogReestablish yourself as the “alpha” dog in your “pack.” It may very well be that you’ve let your dog get aggressive and take the lead; however, dogs are happiest when YOU are the “alpha” dog, such that you’re the leader and they follow. So if things have gotten out of control and your dog has become the “alpha” dog, you need to take control back.In that case, you’ll need to practice some obedience tricks to get your dog to stop growling inappropriately.When you first witness inappropriate growling behavior (where the dog isn’t really being threatened by anything), give a gentle but sharp tug on the dog’s collar and firmly reprimand him with a loud “no!” It’s perfectly okay to “shame” the dog a little bit, because dogs want to please you and of course you want that. Shame is an unwanted consequence for the dog, so if you shame him a little bit, he’s less likely to repeat that behavior. However, never, ever hit your dog as a form of punishment.Consistency is keyFinally, as you work with your dog to stop inappropriate growling, remember that it’s really important that you reinforce to your dog that his growling is inappropriate EVERY time it is, or you won’t be able to stop dog growling. If you do, though, you should see inappropriate growling stop and then disappear altogether, in a relatively short amount of time.

2. How To Stop A Dog Whining Learning how to stop a dog whining is easiest when you understand the cause of the whining in the first place. There are many reasons why a dog may whine and it’s important to understand the different sounds and pitches of your dog’s whine in order to help rectify it.Sudden WhiningIf your dog has never whined before and suddenly begins, you may have a dog that is in pain or sick and is trying to tell you that something’s wrong. Never punish a dog that is trying to communicate hurt to you. Try to figure out what’s hurting your dog so to make him whine and take him to a vet. This kind of sudden whining doesn’t need training. It needs attention.Fear WhiningSome dogs whine out of fear. They worry that they’ve been abandoned by the pack and they want to be rescued. This often happens with puppies or young dogs left alone or outside for long periods of time and they begin to worry that you’ve left them for good. Some dogs may even whine out of fear for storms or loud noises or something that’s frightened them.Don’t punish a dog that is whining out of fear. You risk making your dog even more anxious and fretful, which could make the problem worse.Separation Anxiety WhiningLearning how to stop your dog whining after you leave the home and are separated from him for any length of time is an anxiety issue. Teaching a dog to overcome separation anxiety needs patience and persistence.Begin by leaving your dog outside for a short period of time. Give him toys and perhaps even scatter some kibble around the yard for him to hunt. This helps occupy his mind and take his attention off you not being there. Be sure your dog can see you walking around inside the house, but don’t pay any attention to him. If he whines at the door, walk to another room. When the whining stops, walk around in his view again, but pay no attention to him just yet.When he’s been alone for a short time and the whining seems to have settled down, let him come back in again. Gradually increase the length of time he’s left alone and eventually he will realize that you always come back for him.Attention WhiningSome dogs whine for your attention. Many owners struggle with how to stop a dog whining once they’ve established that it gets their master’s attention. Unfortunately, if your dog already knows that every time he whines, you’ll give him a pat or a treat, he’ll keep doing it and it may even get worse.The object is not to reward your dog for whining in the first place. Your dog will need to understand that you’re happy to play, pat him, take him for a walk and feed him, but only if he’s not whining.If he begins whining as you’re serving his meal, stop what you’re doing and turn your back. When the whining stops, you can begin serving the meal again. Continue this until your dog understands that whining doesn’t help.This is also true when your dog is demanding your attention or affection. Don’t reward the behavior by reaching down to pat him or soothe him. Turn your back and tell him to sit. When the whining stops, you can feel free to praise him and lavish attention on him.There are many ways how to stop a dog whining, but the biggest tip you can learn is patience and understanding of what’s making your dog whine in the first place.

3. How To Stop A Dog Biting If you have an animal that is prone to biting, it is important to make sure that you are learning how to stop biting dog. This is not only to protect the people or animals that could become physically harmed by your dog, but it is also to protect your dog.A dog that bites is considered to be viscous in most areas and it can be ruled that the dog has to be put down because of it. If you do not want to lose your dog like that, it is important that you take action. Also, if your dog bites, you can be sued and you can end up owing someone thousands of dollars.If you happen to be lucky enough to still have a puppy, it may be a little easier to stop biting dog. Many times, the biting habit is formed during the puppy years and it is the fault of the owner for not taking corrective measures.Stop Your Dog Biting For Good

The last thing you will want to do is to play a game of viscous tug of war with your puppy. While this game seems innocent enough now, it is teaching your puppy that not only is biting and pulling acceptable, but it is a behavior that comes with rewards.When you are the one teaching your puppy that it is okay to bite people or anything else for that matter, it is going to be sort of hard to stop biting dog later down the road.The sooner you get started with the training the better. This of course does not mean that the training will not work if your dog is older now. You certainly can teach an old dog new tricks so do not give up on your pet just yet.Make sure that you are giving the stern “NO” command as soon as your dog starts to even think about chomping down on your hand, arm, or something that does not belong to him. If your dog steps back from that command and then comes back more gentle, then make sure that you are rewarding him with nice words and maybe even a scratch on the back. He will naturally start to pick up on what makes you happy and what makes you mad. Your dog strives to make you happy so he will do his best to try and figure out just what will do that.If your dog has gotten way out of hand to the point that you are unable to properly train him in a sufficient enough manner to stop biting dog, you will need professional help. There are certified dog trainers out there that specialize in working with dogs who are prone to biting. If you contact one of these trainers you will be able to get your dogs biting under control in no time at all.Get started working on stop biting dog issues right away. The sooner you get started the more likely it is that your dog will be able to keep himself from doing harm to himself or others. 7 Things To Think About Before Adopting A Dog

7 Things To Think About Before Adopting A Dog