5Ws+1H: How It’s Done: Consistency in training the best recipe for walking a dog | News 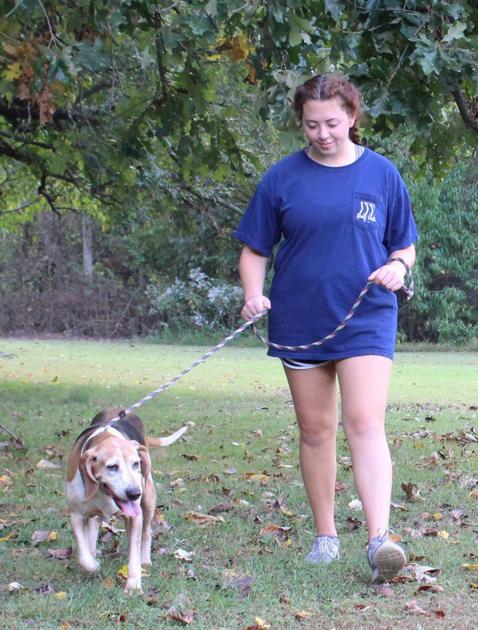 Dog owners know that going for a walk can sometimes be stressful if the animal is a little over-excited, but a stroll around the neighborhood doesn’t have to be a bad experience.

The outside world is filled with noises and smells that can turn an untrained canine into a sled dog, dragging its owner along on the leash. Instead of playing tug-o’-war every time they leave the house, owners who remain patient with their pets can make the walk easy and enjoyable.

There are several ways to train a dog to stop pulling, but Sarah Workman, at Petsense in Tahlequah, said loose leash training is the most effective way. So when the dog starts to get too far and begins to pull on the leash, the owner should stop and wait for the dog to return to the human’s side.

“I’ve even started to walk backward once the dog stops, so he has to turn around and catch up,” she said. “So every time he gets too far out and starts pulling you, just stop and hold your ground until he comes back and the leash is loose to where it almost looks like a U.”

Owners should bring along some treats, as it’s important to reward the dog for returning. Once the dog is calm, the owner can continue on the journey. While the process may sound simple, it can take some dogs longer than others to catch on.

There are devices owners can use to keep their dogs in line. No-pull harnesses could do the trick.

“It’s a normal harness, but it has the ring you use to attach the leash to on the chest,” Workman said. “So he’s not being able to pull backward, he’s going to have to stay close to you.”

Some people still use choke collars or prong collars to stop dogs from pulling. But these can be harmful for dogs if not used properly. Studies indicate dogs can suffer damage to their thyroid glands and have breathing problems from choke collars. Workman said some trainers ask students to buy one for an obedience class, but they should only be used when there is an expert there to walk them through the proper usage.

“It’s a little contraption that attaches around the head, and wherever the dog’s head is being led, that’s where the dog will walk. Since he can’t really pull on it and it’s attached to his head, he’s kind of having to follow your lead,” she said.

As if all the sounds and smells weren’t enough to stir a dog up, walking in a straight line can be even harder when passing humans or other animals. If owners are having a hard time controlling their pooches when they see other pups, they’ll likely need to stop and let the other one pass.

“With my dogs, I always stop and I get them as close as I can,” Workman said. “I’ll choke up on their leash a little bit so they’re close, and usually I’ll even get down on the ground so I can hold on to them better so they can see that dog walk by. Once that dog is a good distance, we can continue our walk.”

Owners with new dogs should also start with a short leash. That way it doesn’t give the pup to much room to jerk the owner around. Those having trouble with pulling might want to use a leash as short as 2 feet.

“Early on, especially if you have a young enough puppy, you can always just let them walk around the house with the leash attached to their collar,” Workman said. “It gets them used to the leash and they’ll sometimes step on it, so they’ll realize they can’t go anywhere.”

Like humans, dogs need exercise. While the backyard is a good place to let them release pent-up energy, going for a walk can help improve the bond between man and his best friend. It can also help socialize them and teach them how to properly interact with other people and dogs. And while leash pulling may feel frustrating for owners, if they’re persistent, they can nix those types of bad habits.