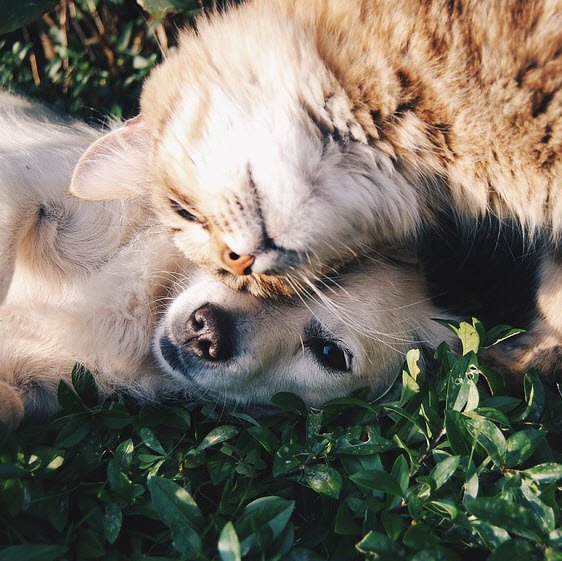 Despite both walking on four legs, being furry, domestic, and popular pets, dogs and cats are very different from each other. Sure they shared a common ancestor belonging to the order Carnivora several millions of years ago, but several more million years after this order emerged, it split into two. The groups that the order Carnivora split into are Caniformia and Feliformia. Dogs and cats began evolving separately from these different groups that are noticeably named to represent canines and felines, dogs and cats respectively. 43 million years after this division leads us to the present day after dogs and cats have undergone evolution shaped by natural selection, natural disasters, changes in climate, changes in the genes, and of course, the intervention of humans.

Because dogs and cats evolved for a long time and still continue to evolve from Caniformias and Feliformias, the ones that we have today are very distinct. Our pet dogs and cats barely have similarities with each other in physical features, skills, activities, socialization, hunting tendencies, sleep cycle, responses and sounds, and as result of these, diets. 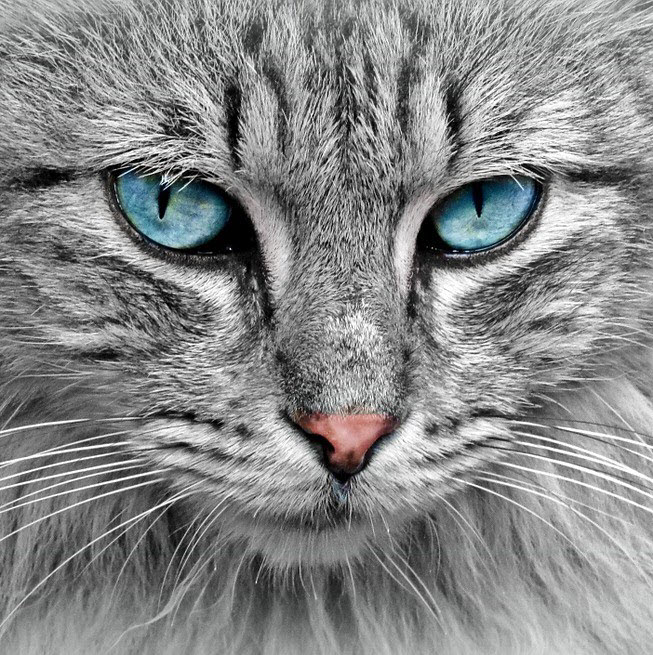 Dogs have ears that may be turned up or flapped down depending on their breed, rounded dark noses for booping, tongues that sticks out to cool down their bodies, soft paws for stomping, and expressive mouths that let us know if they’re happy, annoyed, playful, or guilty. Cats on the other hand have ears that are always turned up to sense possible preys and predators, cute tiny pink noses, closed mouths, sharp claws for climbing up and safely going down structures and trees, and expressive eyes that let us know if they are in the mood to play or not.

One can easily tell whether someone else’s pets are dogs or cats, but the most obvious differences in physical features lie in their eyes. Most dogs have asking eyes because of the wide rounded pupils on the center of the warm colored irises of most breeds. The dark irises of most breeds make dogs’ eyes appear larger; this does not include dog breeds that occasionally have cool colored irises like Siberian Huskies. Cats have steely gazes because of the generally cool colors of their irises with their narrow pupils on the center. In proportion to their small faces, cats’ eyes look bigger and more intimidating. Another feature that shows that dogs and cats have come a long way from their common ancestors is their claws. Dog’s claws are duller because they spend most of their time walking and running on the ground. This nature of theirs wears down and dulls their claws. Cats on the other hand have razor-sharp claws that they can yield and retract depending on their need for attack, defense, or grip on surfaces when climbing. 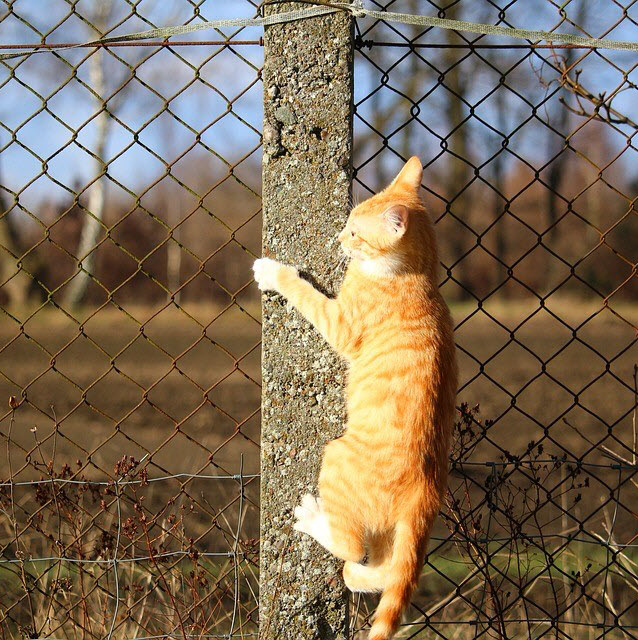 Although cats are physically active pets and also play with humans when they’re in the mood, they are not the best pets to play Simon Says with. Cats are flexible like gymnasts, but they aren’t known to be athletic. Dogs, on the other hand, enjoy playing fetch. They follow their owners wherever we go in the house, sit when we sit, and may even go on short runs with us. Unlike cats though, they cannot climb trees and land safely on their feet when jumping to the ground. Cats are flexible like rubber bands; they have lean muscles that can stretch as they calibrate their strong and sudden movements to pounce on their prey or boost them up when climbing up walls. Because adult cats don’t weigh as much as most breeds of adult dogs, they use the momentum of their sudden actions to make their movements strong enough. Just because cats sometimes don’t appear to be too into exercise doesn’t mean they aren’t strong and agile. 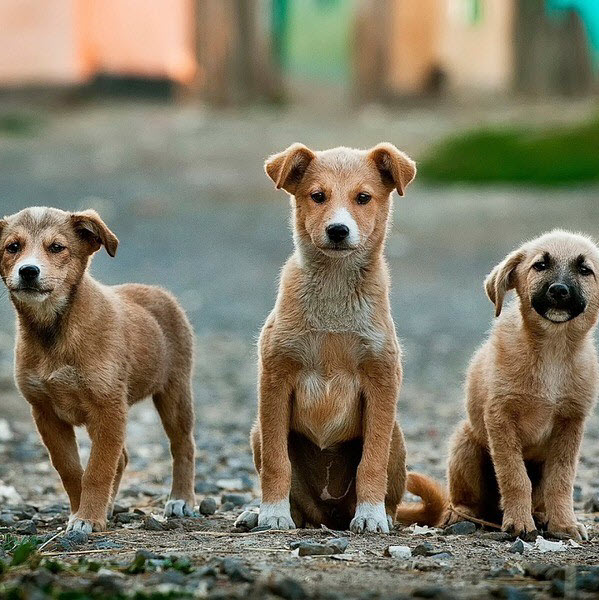 Dogs are territorial while cats have high defenses. How dogs and cats go about their daily lives and interact with others tell us a lot about how different their tendencies are. Bonding with dogs and cats through games and tricks are also very different. Dogs like to play fetch by bringing us back objects that we throw across an area, while these objects will be ignored by cats. However random objects lying around can surprise cats and even compel them to push them off tables for reasons we will not know. Pet dogs may enjoy playing with other dogs as their untamed counterparts can naturally be found in packs. Pet dogs see their owner as their pack leader, looking for direction and following it closely. Cats on the other hand will rarely play with other cats even when there are 10 of them all in the same room.

​These socialization patterns can be closely observed in dog and cat cafes. Dogs interact with other dogs and humans differently from how cats interact with other cats and the human guests. Even though the dogs and cats in these cafes are trained, some of the behaviors that are inherent to their breed still tend to show. Their behavior and socialization patterns can be difficult to compare accurately because, like humans, their personalities can vary depending on their training, age, stress level, mood, and even breed. Being dogs and cats can only influence their behaviors so much. Even though cats wouldn’t be bothered if we leave them for hours at a time, it doesn’t mean that they don’t enjoy getting petted by their human owners from time to time. Owners often need to take the first step in connect with pet cats. There are dogs that tend to be shy while there are cats that would climb up humans’ laps to be stroked and brushed. Ultimately, their individual personalities and how they were nurtured by environmental factors result to their socialization patterns. 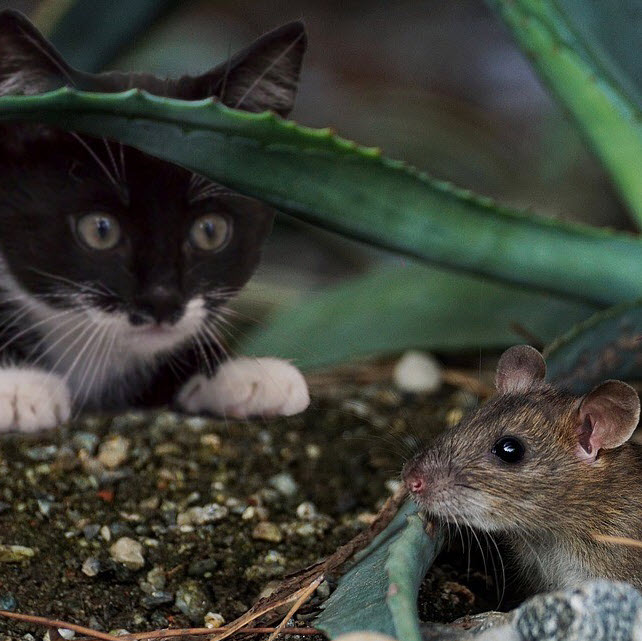 Dogs and cats approach their prey differently. Dogs stay on the ground moving forward to chase their prey with great speed while cats are capable of moving up and down. Dogs hunt in groups because they have been pack members throughout history. Untamed dogs tend to work with their groups to effectively defend themselves from predators and catch preys. This is why pet dogs tend to involve themselves in our activities as their owners, sometimes just by following us everywhere even when we are just doing chores.

Cats climb furniture and fences to chase their prey; they also tend to leap down from higher structures to pounce on their prey with movements boosted by compressing their bodies like spring and boosting their sudden movements forward. Unlike untamed dogs that move in packs, untamed cats are lonesome. Stray cats in cities wander alone because they are solitary hunters. Even pet cats are independent enough not to rely on their owners for things beyond the basics such as clean litter box and food. 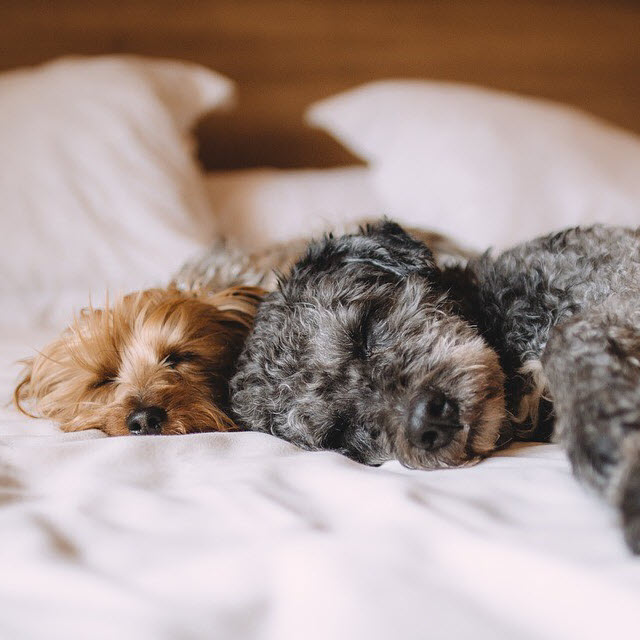 While we’re sleeping soundly with our dogs at night, this is when cats feel like playing the most. Looking back at the times when we’ve heard cats meowing, it’s not hard to realize that they’re extra noisy at night, with stray cats particularly more social at night. Cats are nocturnal animals; they are sleepy during the day and awake or more active at night. Our dogs are playful during the day as we’re performing our everyday routines while cats are more calm and lazy. At night, cats tend to be more playful. Other than their inherent tendencies as dogs and cats, these sleeping patterns of our 2 favorite pets explain why they seem to have different energy levels and, more importantly, why they consume food differently. 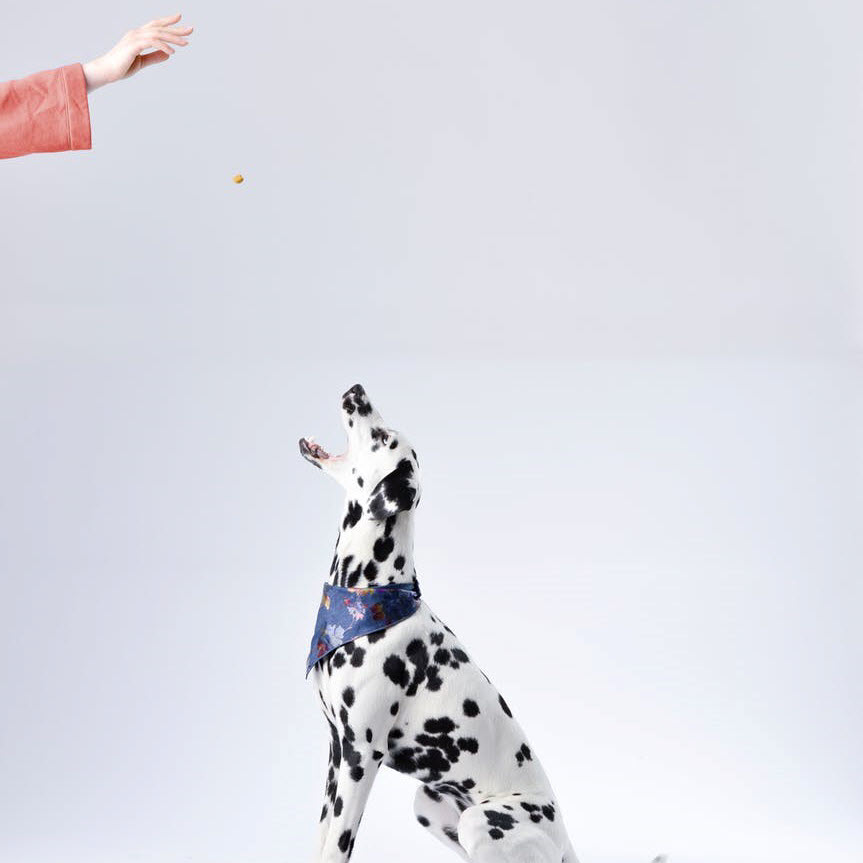 It’s important to understand our pet’s food and nutritional needs. Even though dogs and cats of different breeds and sizes enjoy eating, cats need to ingest smaller and more frequent meals than dogs. This can be due to the fact that when their human owners are awake, they tend to be less active compare to how they are at night. Dogs generally have shorter lives than cats, only living until up to 15 years old on average while healthy cats live beyond 20 years old. Our dogs have faster metabolism than us humans. This means that they breathe faster resulting to faster heartbeats that pump blood faster; making their bodies warmer and age faster.

Cats are more carnivorous and will barely need the carbohydrates that some pet owners put into the food that they eat. Even though dogs are also carnivorous, they need not only bigger portions of everything we feed cats but also with the addition of a lot of carbohydrates and a lot more fiber. Dogs do not have the claws to make their activities shorter and easier. Cats on the other hand are not as active during the day when their owners are awake to feed them. This means that dog food must have bigger portions and must include fiber and carbohydrates. This also means that cat food must have smaller portions and must include only the essential vitamins and minerals other than protein. Cat food is generally flavorful because they’re meat-based. This makes dogs want cat food too. While dog food also contains meat, they also contain other ingredients that they need. It’s not healthy for dogs to eat cat food for an extended amount of time and dog food will upset the stomachs of cats. 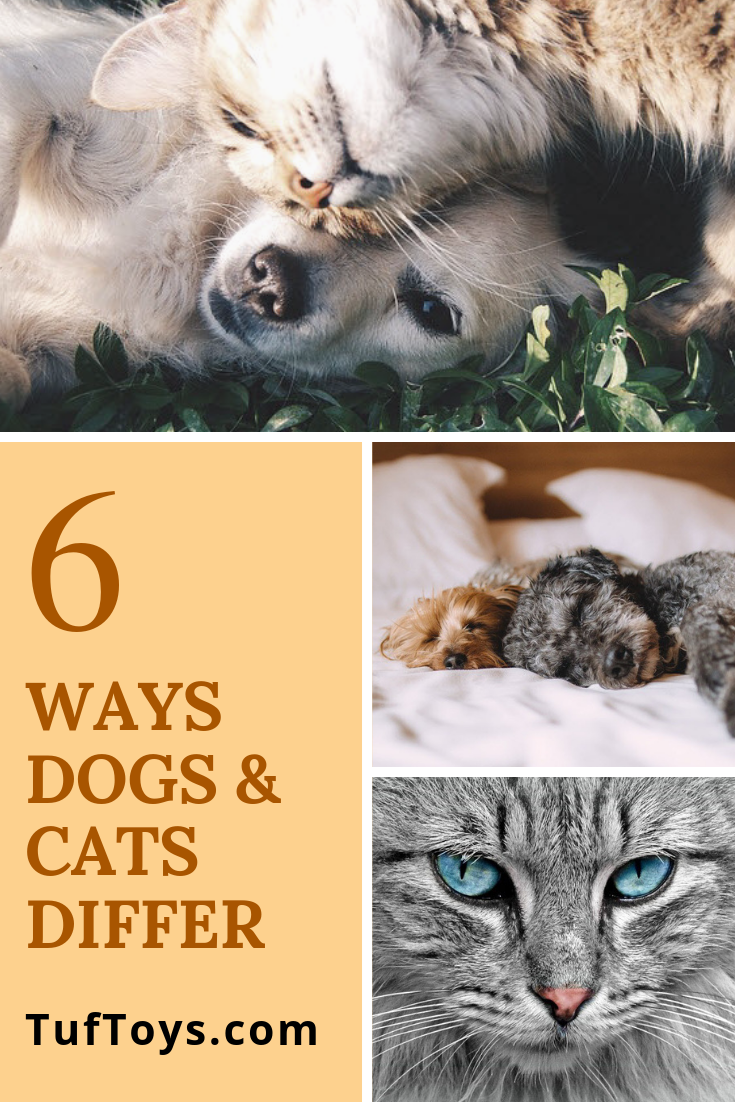 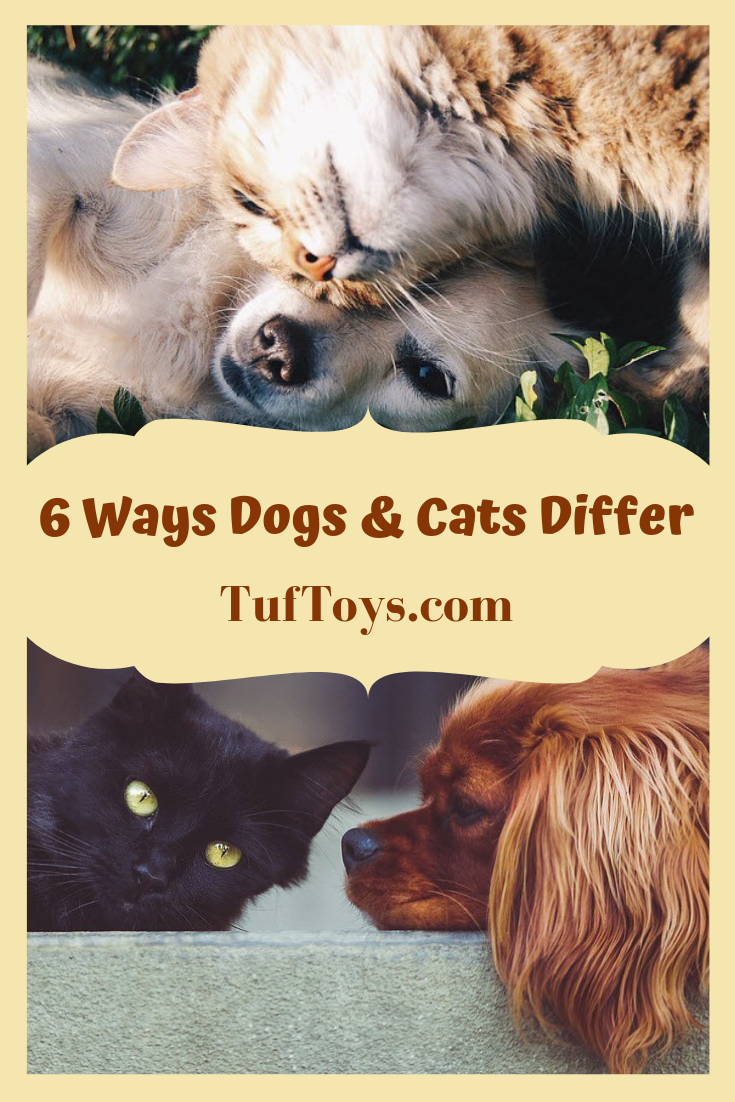 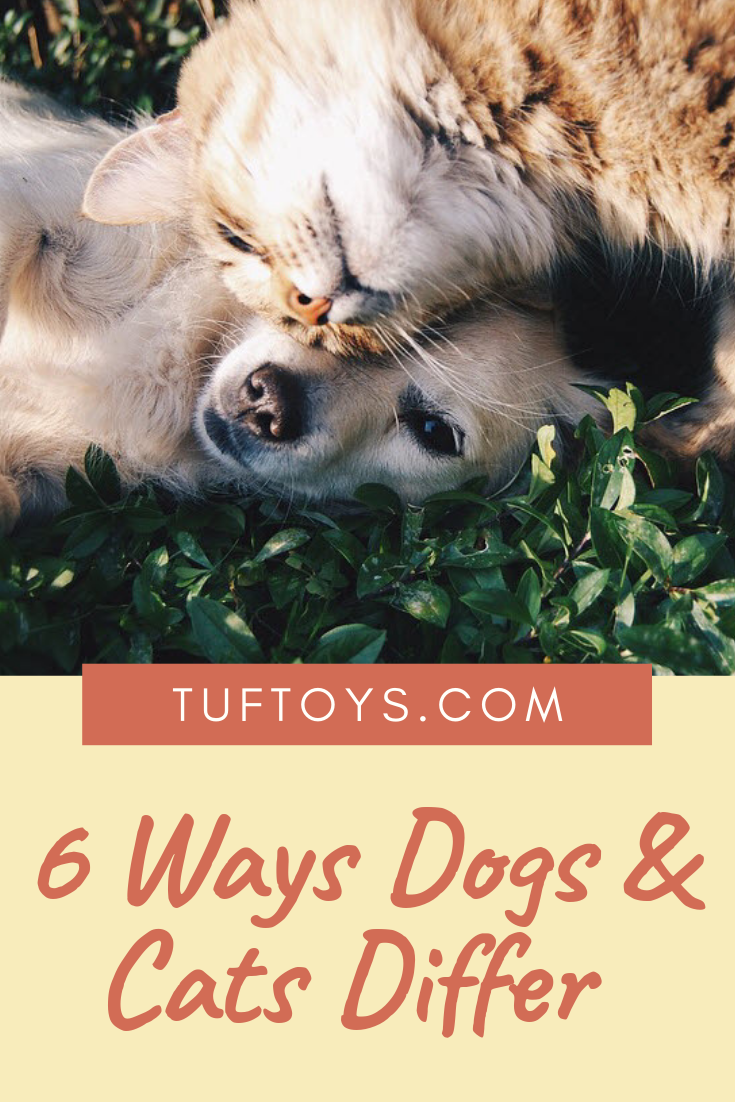 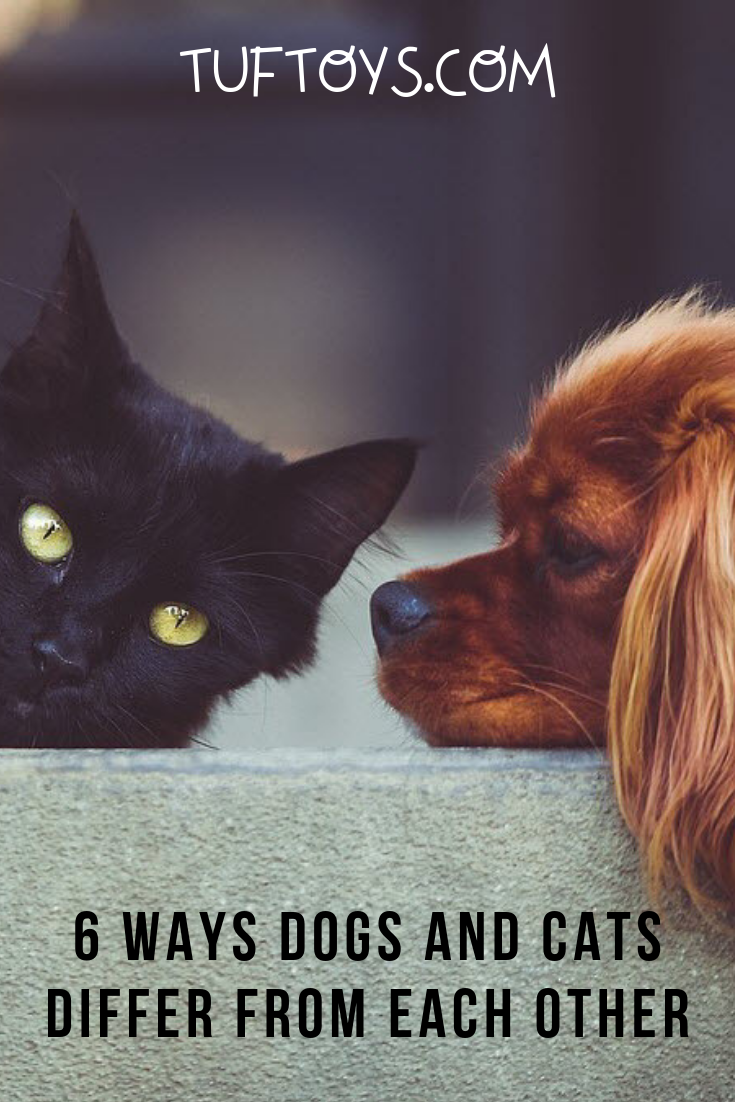