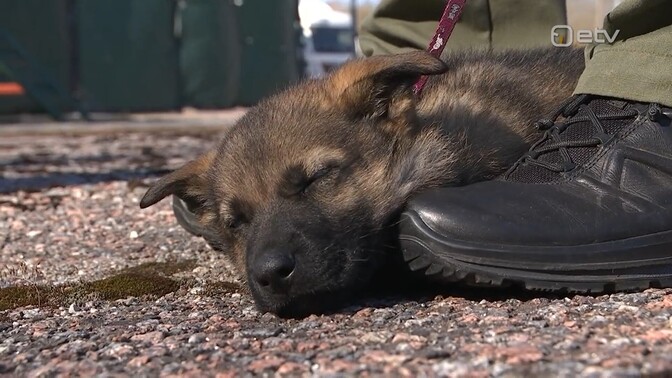 The puppy, known as mike, is one of two males who were brought to Estonia from Finland – his sibling has been assigned to the PPA’s southern prefecture, while Mike stays with the northern, based in Tallinn.

Dog handler Risto Kotkas told AK that: “We’ve been together for a few days now and got to know each other a little bit.”

The puppy’s abilities already include walking on a leash – albeit one designed for a cat – which, AK reported, is not a given for dogs of that age.

Mike and his brother will join the around 80 service dogs the PPA holds, though his training will take time, and will even involve accompanying other dog patrols while still young, to get acclimated, AK reported.

Training one dog takes about two years. It takes place at the service dog training center at the defense academy (Kaitseväe Akadeemia) while, of course, the training is daily, AK reported.

Some dogs do prove unsuited to the task and must be re-housed or at least retired from the force. Those that make it live at home with their handlers, and retire at around the age of 10, depending on the individual dog.

At the other end of the career cycle, the PPA’s long-serving narcotics dog Nacho retired last June.