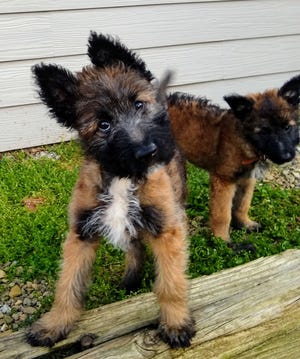 The Belgian Laekenois was recognized Wednesday as the American Kennel Club‘s 196th breed.

But the rare dog breed known for its coarse coat and protective personality won’t make its debut on the world stage anytime soon: More than 11,000 U.S. dog shows and canine competitions have been canceled because of the COVID-19 pandemic, said Doug Ljungren, an executive vice president of the AKC.

In Oklahoma City, the AKC took thousands of early entry slots for the AKC all-breeds National Championship, the largest dog show in North America, on Dec. 12-13. The Belgian Laekenois will make its debut next year at the Westminster Kennel Club show.

The AKC held its first virtual dog show for fundraising in June, without championship points scored. Up to 700 participants submitted videos of their dogs, raising $7,000 for dog owners during the coronavirus health crisis.

Still, the Belgian Laekenois (pronounced LAK’-in-wah) may be at the forefront of dog lovers’ attention after being recognized by the AKC, the oldest U.S. purebred dog registry and dog-sports governing body.

Belgian Laekenois adoptions and purchases of all breeds have gone up since the pandemic, the AKC says.

“Sometimes, it’s a matter of seeing a breed and knowing it exists,” said Brandi Hunter, AKC vice president of public relations and communications. Hunter says the AKC typically sees an increase in interest after the group’s official recognition of a breed.

The Belgian Laekenois, a highly protective working dog with a shoulder height of 22- 26 inches and weight of 55-65 pounds, is the rarest of the Belgian herding family, according to the AKC.

Adoptions are up:Adoptions, fosters empty shelter cages during COVID-19 crisis, but there will always be homeless pets

“But let it be noted, this is not one of those pop-star breeds, rather it’s a solid blue-collar character,” the AKC said in announcing the selection.

The Belgian Laekenois, deployed as a messenger dog in both World Wars, got its name from the Northwest suburb of Brussels, Laeken, where the breed originated. Adolf Hitler placed a bounty on the dogs during World War II, according to the AKC, which significantly decreased the breed’s population.

This limited edition canine can be difficult to acquire; there are only 1,000 Belgian Laekenois worldwide, according to the World Wildlife Fund. That’s fewer numbers than many endangered species.

The newly recognized Belgian Laekenois may not be the most popular pooch in the kenneljust yet compared to the Labrador Retriever, ranking first in AKC polls since 2014, followed by German Shepherds and Golden Retrievers.

Fostering tips:Everything you need at home for fostering a dog or cat

However, their scarcity is exactly what peaks the interest of dog enthusiasts around the globesuch as Kellie Cosby, owner of Coswald Kennel in Ball Ground, Georgia.

Cosby adopted her first Belgian Laekenois from Canada in 2010 after years of tracking down the breed.

Cosby says she has seen a striking uptick in Belgian Laekenois puppy purchases since the pandemic and expects to see more now that the AKC has recognized the breed.

“It’s been a crazy increase,” Cosby said, “I have found that families who have wanted a dog in the past but didn’t feel like they had the time, now find themselves working at home. It is the perfect time to bring a dog into their families.”

Cosby has provided animal assisted therapy programs to hospitals since 1990 and says  the Belgian Laekenois are perfect dogs for the job given their working nature, gentle disposition and intelligence.

While they no longer serve patients because of new CDC guidelines, the dogs were considered essential workers at the beginning of the pandemic. The breed provided rehab, physical therapy and speech therapy, often working with patients with spinal chord and brain injuries.