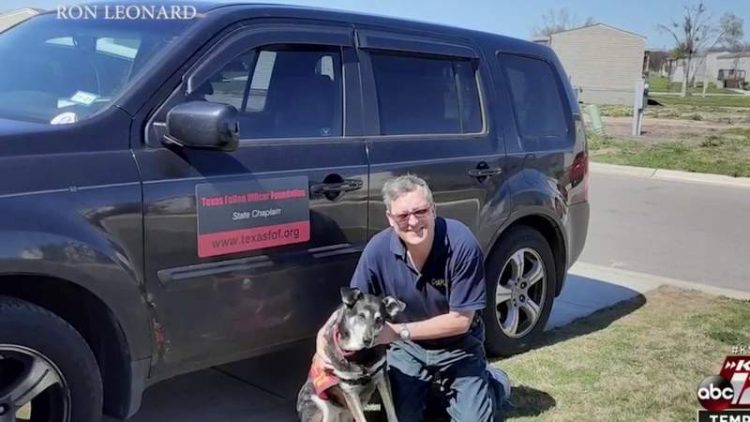 BALCONES HEIGHTS – – When officers are mentally and emotionally well, they will perform better on duty.

That’s the viewpoint of the Balcones Heights police chief, who in the last several months brought a full-time volunteer chaplain and mental health specialist to the team.

It was a decision that came out of a near-tragedy that started February 3, 2021.

“We heard Sgt. Sepulveda transmit out on the radio that there had been an officer shot,” said Chief John Jahanara.

Turns out, Balcones Heights Sgt. Jose Sepulveda himself had been shot three times during a car burglary investigation.

Just this month, Sepulveda returned to the hospital to thank staff and his fellow officers for saving his life.

That was a celebratory day, but months before, his colleagues were traumatized, worried, and stressed.

“It’s my responsibility, the chief’s responsibility to make sure our guys and girls are functioning at the fullest,” Chief Jahanara said.

Chief Jahanara took over the position two years ago during a time when policing was being put under the microscope.

“Policing is customer service. If your mind is not straight and you’re the mediator, then it’s probably not going to work well. You’re going to be on edge. It’s like not getting sleep,” he said.

After Sgt. Sepulveda’s incident, Jahanara realized there was an opportunity for better mental health support for his team.

“When sergeant was tragically injured, I came on board and started helping them with food, support, emotional support and prayer,” said police Chaplain Rob Leonard.

Chaplain Leonard had been assisting other local police departments in Windcrest and Von Ormy, but made a special connection with Balcones Heights officers that week.

So did his partner. He doesn’t go anywhere without his popular sidekick, 11-year-old therapy dog Molly.

“Molly’s been in over 5,000 visits and 100 critical calls. She has been to three school shootings, four officer funerals, and two officer downs,” Leonard said.

Molly and Chaplain Leonard have only been working with Balcones Heights for about four months but they’ve already pretty much met the entire police force.

“When an officer gets killed or we deal with trauma with children or things like that, Molly and I are able to move in and help them emotionally,” he explained.

However, he’s not just there for extenuating circumstances. He’s now been brought on board full-time, to even help with every day stress officers have at home.

“Chief sends an email out that says this is his contact information. You can call him at 3 a.m. in the morning and I really mean it,” Leonard said.

Chief Jahanara admits it can be hard for some officers to shed their tough exteriors and open up.

He is complimenting Leonard and Molly’s services by bringing in a full-time mental health therapist to help offices deal with anything that may arise on or off duty.

Jahanara sees other law enforcement agencies in the San Antonio area, making mental health a priority, and he hopes departments across the nation will take notice.

It’s a task he said he’s thankful he doesn’t have to take on alone, thanks to his new teammates.

Can your dog sniff out Covid-19 from your ‘smelly socks’? Here’s what a study has found