Barking dog alerts woman to trailer fire near Redmond, makes it out with infant 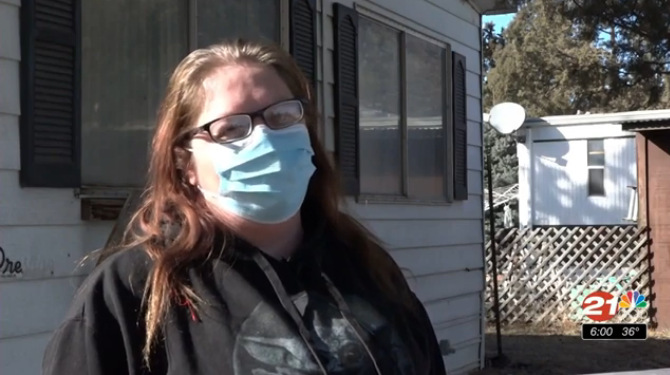 (Update: Adding video; comments from resident who crawled out of house with dog, baby)

REDMOND, Ore. (KTVZ) – A barking service dog alerted a woman to a fire in her mobile home west of Redmond early Sunday morning and she managed to crawl out of the smoke-filled home with her infant niece and her dog.

Fortunately, a melted, burst water line soon put most of the blaze out, officials said.

Redmond Fire & Rescue crews were dispatched just after 1 a.m. to the fire at the Cline Falls Mobile Home Park in the 7000 block of Highway 126W, Captain Ken Brown said.

The first units to arrive found a small fire in the area of the dryer vent, contained within an exterior wall of the mobile home, Brown said.

Jewel Griffith told NewsChannel 21 she was home and asleep, after dropping off her partner at work for the graveyard shift, when the dog woke her up. (The baby is her niece’s.)

“The house was just full of smoke, and you couldn’t see anything,” Griffith said. “I had the baby in my arms, just trying to get out of the house. My service dog actually crawled out of the house with me, which was pretty cool. I’ve never seen a dog do that. That one was different.”

Brown said smoke detectors were present in the house, but did not activate.

After ensuring everyone was out of the home, fire crews entered, breached the wall space and put out any remaining fire.

There was minimal damage to the walls and surrounding structural supports because the fire melted a water line, which burst and put out the majority of the blaze, the fire captain said.

“I’m just blessed that it didn’t take the whole house,” Griffith said. “I’m just thankful, actually. I got pretty shook up, but I’m actually very thankful to have such a loving dog that was actually alert to that.”

The cause of the fire was under investigation. Losses were estimated at $2,000 to the building and contents.

The American Red Cross was called in to assist the displaced residents and provide needed shelter and supplies, Brown said.