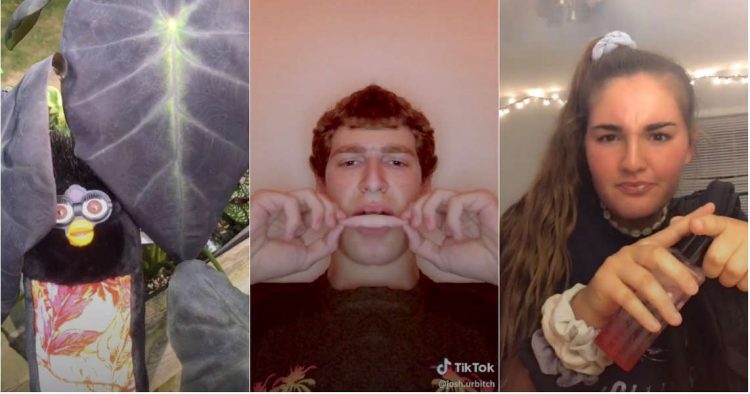 TikTok, the short-form video app your local teens are obsessed with, can feel like an enigma to outsiders and/or people over age 24. With a somewhat insular culture that continuously recombines popular sounds and visual gags into new monstrosities, there’s a lot to keep up with just to feel like you’re truly “in” on the joke.

Luckily, TikTok isn’t actually all that hard to get into thanks to the power of recommendation algorithms; the app’s endless For You page initially seems like an overwhelming well of content, but all you have to do is scroll and like the videos that make you laugh, smile, or feel whatever emotion you want to replicate over and over. Eventually, TikTok will get a pretty good grasp on the kinds of videos that you’re all but guaranteed to like, but by that point, you’ll probably already be spending countless hours on the app.

If you’re not convinced, however, we’ve compiled a list of 15 TikTok videos to try and get you hooked on the app’s bonkers brand of humor. This is by no means a comprehensive or superlative list — think of it more as a primer to the kind of hilarious content that TikTok has to offer.

Like literally every other social media platform, TikTok is a haven for cat-related posts, including challenges based around putting cut-out slices of bread on cats’ heads and a notable viral video that’s just a cat flying around in the air to “Mr. Sandman.” This video, however, is a cat yelling its lungs out and throwing a fit when it doesn’t get to lap at a candy bar. Past that, I don’t think I need to explain why cat videos are popular. It’s a universally accepted truth of the internet.

While TikTok is basically Gen Z’s online playground, the platform hasn’t totally ignored the past. This TikTok, which features a toilet paper roll determinedly rolling its way from the grocery store to the bathroom, mocks an infamous Chef Boyardee ad in which a can follows a Chef-obsessed little girl home to, uh, be her dinner. Even if the Chef Boyardee reference goes over your head, the video works on its own as a devastating tale of a toilet paper roll that arrives in the bathroom empty, having rolled too far to the sounds of an accordion and gently crooning French man.

A furb in the pool, a furb at the spa

Long Furbies are kind of all the rage right now. Blending nostalgia with a pretty serious WTF factor, they’re both a joy and horror to look at. @LongBoyeFurb capitalizes on the fact that it’s near impossible to tear your eyes away from a good Long Furb, and this video is one of the account’s most popular. The sound (from user @theplushieshow_) perfectly complements the visual mood with a grating rendition of High School Musical 2 classic, “Fabulous.”

This post plays into two previous trends on TikTok: eating your own fingers, and matching a mustache to a “Oui.” Originally, the finger-eating trend was tied to a Kidz Bop cover of “Bring Me To Life” by Evanescence, while the mustache gag is typically set to the tune of “Burn” by Ellie Goulding, so it’s helpful to have some knowledge of TikTok to understand what’s happening here. In the broader picture though, it’s just plain funny for the same reasons as its predecessors. Look, a finger nugget! Look, a French mustache joke!

Hello, hello, barbecue sauce on my…

TikTok is frequently compared to its ostensible short-form video predecessor, Vine. While nostalgic millennials still cling to the memory of Vine, TikTok is for the most part populated by Gen Z teens who likely consumed Vine after its death at the end of 2016. As a result, occasional Vine references pop up on TikTok, necessitating a kind of intergenerational, metatextual knowledge to really grasp what’s going on — bet you never thought you’d read that sentence about a social media app. This video uses sound byte culled from an AJR song to parody the infamous “barbecue sauce on my titties” Vine. Also, @noah.hass spelled it “titees,” which is just objectively funny.

Yes, sometimes adults are on TikTok. In this case, news anchor @conflenti turned his workplace into a vehicle for TikTok stardom by managing to lip sync to Jufu’s “Who R U” not only in real time, but also with a pre-recorded clip that looks like it’s from a broadcast segment. This kind of situational leveraging is a huge asset in TikTok videos, and, yeah — sometimes it’s funny to have a feed overrun by teenagers broken up by the odd millennial.

This Gen Z parenthood series from user @straight.cheese is all about today’s teens hypothetically being unable to let go of their favorite slang (and upfront attitude) well into adulthood. You may prefer some of the others in this long (for TikTok) series, but this line alone is good enough to justify the above selection: “Jimmy, if you wear the Sketchers, people will gas you up, I swear to –“

Billie Eilish’s “bad guy” is a mainstay of TikTok culture. From simple lip sync and dance videos to a squeaky door sound parody to a Spongebob remix, the song is so widespread that any snippet of it is instantly recognizable on the app. @maxboonch’s original sound splices together bits of “bad guy” into a conversation between father (or rather, “Puff Guy”) and son. Does it make sense? Not necessarily, but that’s what makes it an essential TikTok artifact.

VSCO girl makes you feel welcome on your first day

This list would be incomplete without a shoutout to the video that arguably launched the “VSCO girl” discourse into the stratosphere. The term itself is somewhat new and indexes a particular type of teen girl marked by certain material signifiers like an oversized tee, copious scrunchies, friendship bracelets, a Puka shell necklace, and, of course, a Hydro Flask. With a liberal use of both “sksksksks” and “and I oop-” the video is essentially every VSCO girl stereotype crammed into an enthralling performance.

Give me some Skittles

Modulated audio clips are a hallmark of TikTok culture, and standouts like “mom did you take my JUUL” have walked so “give me some Skittles” could run. This video features low-lift, click-and-drag animation that no one would mistake for super-polished work, and that’s exactly what makes it appealing.

One of TikTok’s dominant modes is still (unlike, say, Twitter) genuineness; for every ridiculous goof on TikTok, there’s another person on the app showing off something cool they’ve made or an incredible physical feat. That’s why this video, which features user @bigdaddyankee talking about the vert ramp plays so well with the more earnest corners of the app. Just as @bigdaddyankee prepares to take the plunge, the action grinds to a halt. Peppa, what are you doing in the vert ramp? After Peppa Pig’s recent explosion in internet popularity, figures of the cartoon character began cropping up in the most unexpected places on TikTok videos. It’s a pretty simple bait-and-switch meme, but @bigdaddyankee sells it hard.

I just took a DNA test

It’s been the summer of Lizzo on TikTok. Her single “Truth Hurts” sparked a challenge that provokes users to reveal facts about themselves or their heritage. This video from @mxmtoon takes a few wild turns from Lizzo’s voice to an ancestry report to a short clip of “M.A.A.D. City” by Kendrick Lamar mashed up with the Super Smash Bros. Brawl theme. It’s a feat of editing that packs a comedic punch.

Original audio is what makes TikTok feel like a creator-driven community, one where someone’s quippy soundbite can find longevity on the app, perhaps one day achieving the same kind of cultural currency as Vine references hold today. “Respect the drip, Karen,” originally created by user @drewbreeeeze, has a simple, built-in punchline — all you have to do is bring your camera up to the mirror to reveal your outfit. The more ridiculous, the better, and this inflatable snowman costume takes the cake with approximately one and a half million likes.

Hey, can I use your bathroom?

TikTok’s longer format gives it space for something Vine was never able to regularly achieve: painfully awkward, drawn-out comedic timing. Between the just slightly-too-long pauses in the opening conversation to the stare-down between man and dog to set to the tune of the Hereditary soundtrack, there’s a lot happening here. The camera angles! The delivery! The cryptic little smile at the end! This is a 45-second cinematic masterpiece.

Sign up here for our daily Thrillist email, get Streamail for more entertainment, and subscribe here for our YouTube channel to get your fix of the best in food/drink/fun.

Palmer Haasch is an entertainment and culture writer. Follow her @haasch_palmer.