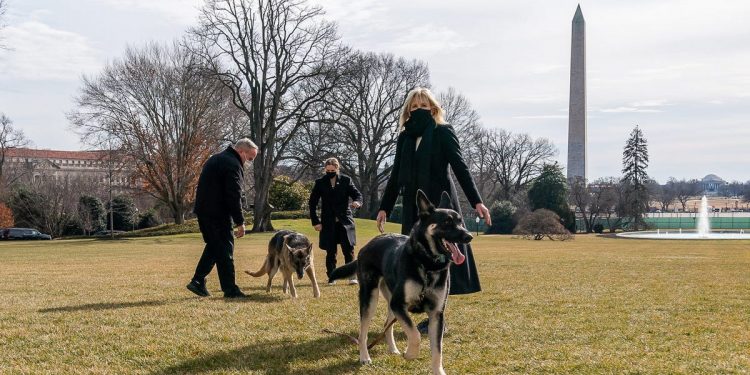 Major was recently involved in a biting incident at the White House and the dogs were taken to Delaware after, though the president said this was due to scheduling and not a form of punishment.

The German Shepherd received training while in Delaware, CNN reported, which Biden previously indicated would occur.

Biden in an interview with ABC News last week said that 85% of the White House staff still loved Major after the incident, which led to what press secretary Jen Psaki described as a “minor injury.”

“Major was a rescue pup. Major did not bite someone and penetrate the skin. The dog’s being trained now with our trainer at home in Delaware,” Biden told ABC News.

The German Shepherd was struggling living in a new environment at the White House and was startled by someone, the president said.

“You turn a corner, and there’s two people you don’t know at all,” Biden said. “And he moves to protect. But he’s a sweet dog. 85% of the people there love him … All he does is lick them and wag his tail.”

Major’s presence at the White House is historic — he’s the first shelter dog to reside there. The Bidens adopted Major from the Delaware Humane Association several years ago.

Former President Donald Trump did not have a dog or any pets when he was in the White House, which broke from a tradition among presidents that dated back over a century. The last president to not have a dog before Trump was William McKinley from 1897 to 1901. But McKinley did have pets — a parrot named Washington Post as well as several roosters.

Trump in February 2019 said he did not have a dog at the White House because he’s too busy. “I wouldn’t mind having one, honestly, but I don’t have any time. How would I look walking a dog on the White House lawn?” Trump said at the time.