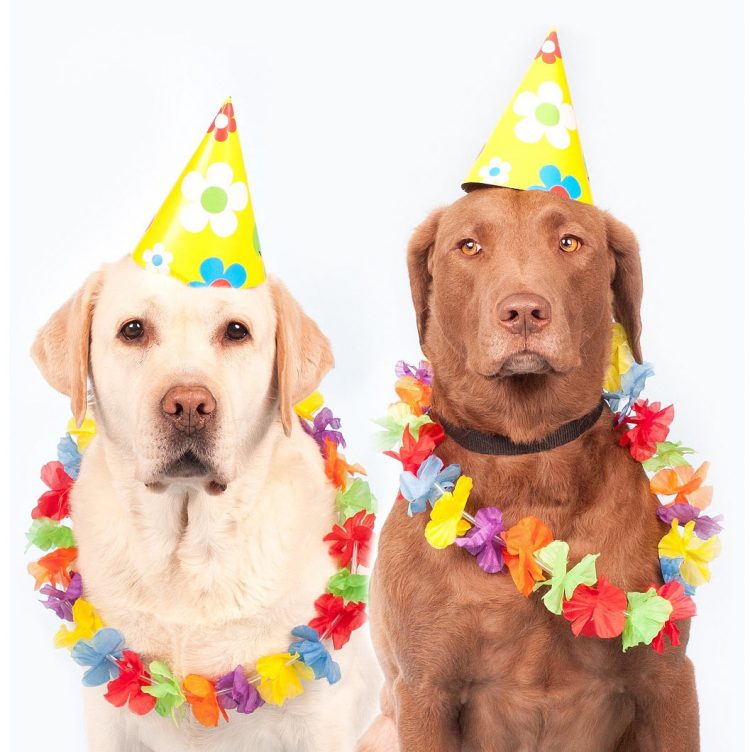 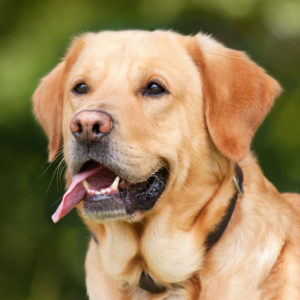 The Labrador is ranked as the most popular dog breed in America for the 27th year running by the American Kennel Association, and it’s not hard to see why. The retriever dog is both intelligent and easy to train, as well as very friendly, agile and a good working dog. But it is the Labrador’s coat colors that bring up one of its most important points of discussion. For one, the AKC only recognizes 3 colors –black, yellow and chocolate – as the gold standard for any true to type Labrador dog breed. Yet there are several deviant colors that occur among purebred Labs, most notably the silver coat.

Why The Different Colors?

One interesting thing about Labs is that you can get all three colors black, yellow, and chocolate in the same litter even if the parents are all of black color. This has something to do with the way genes interact with each other to bring out color expression in the pups. Below is an explanation of what actually happens. 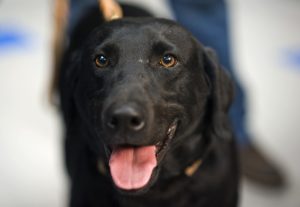 The information that determines the color of your Lab is passed through a pair of genes which, on their part, control the pigmentation in your dog’s skin and fur. For demonstration purposes we will call the genes that control your Lab’s “blackness” or “brownness” the “Bee” genes, derived from Haplodiploidy.

Every Labrador pup inherits 2 Bee genes, one from each parent. The Bee genes come in two types:

This means that there are 3 possible combinations of bee genes that a Labrador pup can inherit from his parents: BB, Bb and bb.

Let’s look at what they mean in terms of the Lab’s outward appearance.

The black coat arises from 2 scenarios:

For a dog to have a chocolate coat the dominant B gene must not be present because it will switch off the recessive gene that gives the Lab its brown color. This leaves us with only one possible gene combination – bb which is made up of 2 recessive genes inherited from the parents.

Why The Chocolate Color Remains Hidden

As you can see from the explanation above, out of 3 gene combinations – BB, Bb and bb – only the last one gives you a chocolate colored Labrador. This means that there’s a 1 in 4 chance of getting a chocolate Lab in a litter, compared to 3 in 4 for a black Lab (the Bb genotype can come in two ways). So when generation after generation of black Labs (with BB and Bb genes) continue to mate with other black dogs, the chances of getting chocolate pups diminishes over time. It is only because of interventions by breeders that the chocolate Labrador’s numbers have risen over time.

But not all Labs are black or chocolate, which begs the question:

How Do Yellow Labs Come Into Existence? 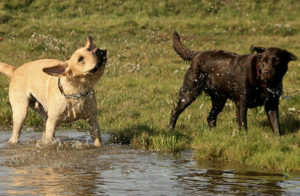 A BB or Bb Lab isn’t always black in color, nor is a bb dog always brown! This may sound like a contradiction but it isn’t. That’s because the yellow coat in Labs comes from a different pair of genes altogether – the “eee” genes. What’s interesting is that these are more powerful than the “Bee” genes.

Just like the “Bee” genes, “eee” genes are made up of both dominant and recessive genes which we can depict as E and e respectively. But things get a little interesting from here. That’s because

Interestingly, whenever E gene is present, it’s able to suppress the e gene, meaning that your dog will only have a yellow coat when the E gene is absent.

There are 3 possible combinations of “eee” genes a Labrador pup can inherit from his parents -EE, Ee and ee. Out of the three, only an ee Labrador can have a yellow coat. That’s because the E gene in both EE and Ee genetic combinations will suppress the e gene, and the Lab’s color will end up being determined by the “Bee” genes instead.

The Full Genetic Makeup For A Lab’s Coat Color

So when we talk about a Labrador’s coat color we’re basically referring to 2 sets of genes – “bee” genes and “eee” genes. Each made up of 2 types of genes: a B or b variant for the black and brown color, and an E or e variant, for the yellow color.

The full genetic makeup of a (purebred) Labrador, as far as coat colors are concerned can come in 9 gene combinations as below:

Two chocolate labs mated together can never throw black offspring for the simple reason that they don’t have the black gene B. However, two chocolate Labs can give rise to yellow puppies if each parent happens to carry the recessive e gene, as shown in the bottom right-hand square in the table below.

How Black Labradors Give Rise to Yellow Labs

A black Labrador comes from four different possible genotypes as shown in Table 1. Only parents that carry the small e gene can give rise to yellow puppies; that because the offspring needs two recessive e genes to have a yellow coat.

If only one parent has the e gene, then all the puppies born will be black, although half will still be carriers of the yellow coat trait.

The bottom-most square on the extreme right shows you how it’s possible to get all three colors in the same litter when both parents are black.

Crossing Black Labs with Yellow ones throws up quite a number of possibilities in terms of coat colors because there are four black color genotypes involved vs three yellow genotypes. Basically, the various permutations look like this: 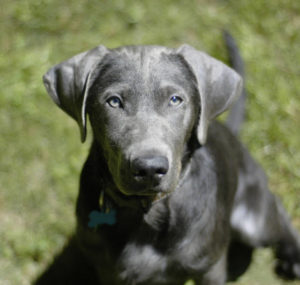 Debate has been raging for a while as to whether Silver Labs are indeed purebreds. Some breeders consider them to be a disaster when they show up in a litter, while other people find them adorable.

The silver coat is considered to be a dilution of the chocolate coat which is lightened up and subtly changed to silver. However, it should not be confused with the white color in some Labs; White Labs are in actual fact very pale versions of the yellow Labradors.

The dilution gene is thought to have been introduced in the Labs around the 1940s or 50s, probably through cross-breeding with dog breeds such as the Weimaraner that is known to also carry this gene. This explains why Silver labs have a greyer or metallic look to their coats just like their Weimaraner cousins.

Dilution genes come in two types denoted by the letters D and d depending on whether they’re recessive or dominant.

When the two recessive d genes pair up they dilute the coat color of the Lab carrying them. If the Lab happens to be black, he’ll have a softer, “charcoal” color, while a yellow Lab will have a paler or “champagne” coat. In a brown dog you get the striking silver color that is so controversial.

Labs that carry at least one dominant D gene don’t have a diluted coat because of its overriding effect on the recessive d gene.

It is quite possible that the dilution gene in Silver Labs became more prominent with the continued breeding of chocolate Labs in the 70s and 80s. The fact that the gene had remained hidden for a long time is typical of recessive genes which can go for years without their effects being noticed.

Registration Of The Silver Lab

Dilution colors are not officially recognized by the American Kennel Club, at least not as colors in their own right. Instead, the organization registers purebred Labs with dilute colors under the standard black, yellow or chocolate colors. The Silver Lab, in particular, is registered under the brown color. Some organizations such as the Labrador Retriever Club, however, do not recognize or accept the Silver Labrador as a legitimate dog breed within the Labrador family. But the AKC has accepted Labs with dilution colors because its registry is based on parentage, not color.

You might be looking to buy a Labrador and wondering which color best suits you. If so you should be wary of the misconception that different coat colors make Labs suitable for varying roles. For example, some say that the yellow Lab is suited to be a service dog, the black Lab – a hunting dog, and the chocolate-colored Lab a household pet or show ring dog.

Some people even go as far as to say that yellow Labs are lazy, black Labs are fast and brown Labs are hyperactive. These are all myths.

Does The Color Of A Lab Affect His Temperament?

It doesn’t. No more than the color of a human being’s hair affects his or her intelligence. The truth is that breeding is what determines a Lab’s personality – that is, what lineage your Lab comes from. You can find many good Labs in all kinds of colors, and bad ones in different hues as well – personalities are a product of what dog owners make of their pets. A great dog breed can end up being very poorly behaved if an owner is irresponsible enough to let it, failing to take note of advice such as reinforcing good behaviour

Which Coat Color Is The Best For A Labrador?

It’s all a matter of personal taste. What a pet parent should be looking at is the Labrador’s breeding history especially the temperament and health of the parents.

While it’s true that colors don’t affect a Lab’s performance, that’s not to say that Labs can’t be specially bred to perform different tasks. It is a known fact that Labradors are divided into two distinct lines in the US; show labs and field labs. Show Labs as the name implies are bred for the show ring and are meant to conform to AKC standards and to have an even temperament, while Field Labs are more workman-like and tend to be more energetic and easier to train than show dogs. For example, field labs respond better to resource guarding behavior corrections

When it comes to a Labrador’s coat colors, three sets of genes play an important role, the “bee” genes, “eee” genes, and “dee” genes. Recessive genes within the “bee” group are responsible for the chocolate color in Labs, while the recessive “eee” genes bring out the yellow coat when they appear in a Lab’s genotype. The last set of genes that affects the coat color is the dilution gene – d – which gives rise to the controversial silver color that has failed to get sanction in some circles. One thing that is clear is that coat color is a trait that has nothing to do with a Lab’s temperament or performance; rather it is how the dog is bred – including its parental history – that determines whether he thrives. Why Do Dogs Eat Poop & Grass?

Why Do Dogs Eat Poop & Grass?