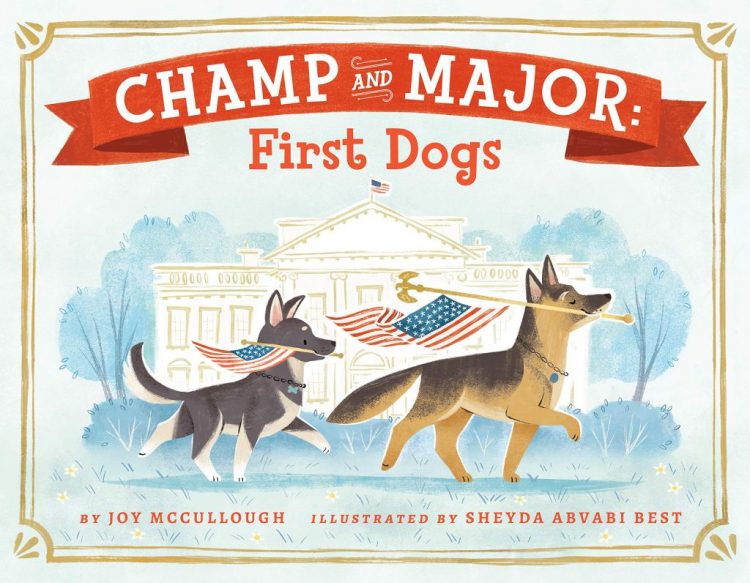 It’s a little bit of this-‘n’-that today, with a newsy picture book, baseball, and a mid-life novel.

The recent arrival of President Joe Biden’s two dogs at the White House made national news after four petless years of the Trump administration. This charming picture book, aimed at the youngest book lovers, tells the dogs’ stories in one sentence-per-page text, illustrated by simple but effective illustrations of the proud canines.

The first sentence, “Champ waits patiently while his dad works,” introduces a double-page spread showing then-Vice President Biden working on a couch (in bedroom slippers) while the German Shepherd adopted in 2008 stands guard. We learn that Champ was often at the White House where he played with Pres. Obama’s Portuguese water dogs, Sunny and Bo. Ten years later, the Bidens’ daughter Ashley saw that the Delaware Humane Association needed foster homes for some German Shepherd puppies. Major joined the family in 2018 as a foster dog, and was later adopted.

When Biden was elected president in 2020, Major would be the first shelter dog ever to live in the White House. “Champ couldn’t  wait to show Major around,” says the text, illustrated by the two happy dogs racing through a formal White House room past a bust of  Abraham Lincoln looking worried. There’s a double-page illustration of the dogs watching the president and vice president Kamala Harris at a press conference where all the reporters are wearing masks. At the end, the president is seated behind the Resolute Desk while Major and Champ snooze on fancy beds. It would be good for the little ones to have a book of their own that shows people they see on television. And what kid doesn’t love books about dogs?

Those longing for the return of “normal” baseball seasons, which have been restricted because of COVID-19, can at least enjoy memories of local ballparks in this information-packed paperback by an author who’s been researching Minnesota baseball history for more than 40 years and is an official scorer for Minnesota Twins home games.

Thornley takes us back to the early days of baseball in the Twin Cities, including rivalry between the St. Paul Saints and Minneapolis Millers. Who knew there was a field in St. Paul known as The Pillbox? And that the small bridge beside the Robert Street bridge, now used by railroads, was a way for fans to get to a ballpark? He writes about the brief period in which football and baseball uneasily co-existed, and the building of Target Field.

At first it seems that $20 is pricey for a paperback, until you see how many photos, blueprints, and maps Thornley includes. Even if you don’t know a home run from a cup of beer, there’s a lot of general interest in local history here.

Professional chef Alexandra Silver arrived in 2016 in “Alexandra the Grate: Who Insisted Life Be Well Done.” In that first book, she was a chef with a popular television show and a teacher at a culinary school. The new book takes place a few years later, when Alex has left TV and is teaching at a local community college. When she falls for Charlie, a pianist, she joins him in New Orleans where she becomes interested in Southern food. Things don’t go well with the affair and she’s soon back home in the unspecified northern city where she originally lived. When she writes a book about food, it’s accepted but she learns an ugly truth about why. And then there’s Ted Hudson, her married lover and CEO of the station where she did her cooking show. Will they find mature love? This is leisurely storytelling.

Zats, a Minneapolis-based author and graduate of La Varenne Ecole de Cuisine in Paris, knows her way around a kitchen. She’s the author of several cookbooks, collections of short stories, and novels. She called her first Alex novel “a coming-of-age story for women of a certain age.”

WHAT ELSE IS GOING ON

Congratulations to Brian Freeman and Jess Lourey, finalists for the Mystery Writers of America’s prestigious Edgar award in the Best Paperback Original category. Freeman is nominated for “The Deep, Deep Snow,” and Lourey for “Unspeakable Things.” Winners will be announced April 30.

Lin Enger’s novel “Undiscovered Country” (University of Minnesota Press), a reinvention of Shakespeare’s “Hamlet,” is out in paperback. It was first published in 2008 by Little, Brown.

An updated edition of “Smoked: the Inside Story of the Minnesota Tobacco Trial” by David Phelps and Deborah Caulfield Rybak is available now from Newsbook Press. First published in 1998, it documents the 1998 tobacco trial, offering behind-the-scenes drama at one of the most important tobacco trials in U.S. history. “After receiving some Hollywood-type interest in TV rights to the book and after watching the rising popularity of e-cigarettes, we figured there might be renewed interest in a case that had a huge impact on public health and was uniquely Minnesotan,” Phelps wrote in an e-mail to the Pioneer Press. Kirkus Reviews called the book “…a compelling courtroom drama that resonates on a human scale.”.

KOONTZ, ISHIGURO  LAUNCH  WORDPLAY: May might seem a long way off, but the Loft Literary Center is hard at work planning the third annual Wordplay book festival May 2-6, which will be virtual. Award-winning authors Dean Koontz and Kazou Ishiguro will start the festival with separate conversations May 2, with more authors to be announced next month. The festival, presented by St. Catherine University, will be free, with enhanced ticket options (and experiences) available for $35 and $50. Tickets are on sale at loftwordplay.org.

A dozen writers in a variety of genres will be guest readers during the virtual spring season of Club Book, a free series coordinated by Metropolitan Library Service Agency (MELSA) to bring authors to Twin Cities metro area libraries. Registration is not required. Follow the Club Book Facebook page (facebook.com/ClubBook), where the events will be streamed in real time. Here is the schedule: