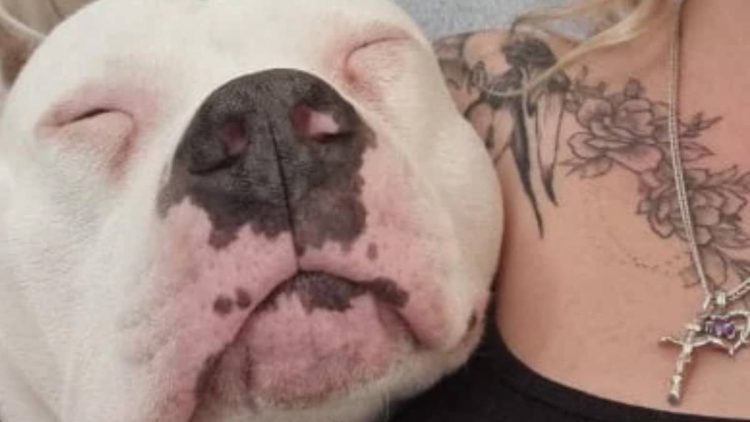 An angry note was left by someone who saw Drake in the car on his own. Photo / news.com.au

An angry letter has left a Canberra local rattled after she found it attached to her car windscreen on her return from a five-minute trip to the supermarket.

Haley Austine returned to a nasty note telling her she didn’t deserve her dog, Drake, who she left in the car while she ducked into Westfield Belconnen mall for baby formula.

“I have reported you for leaving the dog unattended inside the car. I also have pictures. You do not deserve a good dog like this,” the handwritten letter, planted on Thursday morning, read.

What it’s author didn’t know however, was that Drake suffers from a combination of serious medical conditions that makes it unsafe for him to be left alone longer than 20 minutes.

The 4-year-old American staffordshire terrier, who Austine rescued in April, lives with severe anxiety and seizures, which she said were impossible to predict.

“Drake will have epileptic fits and foam at the mouth and even sometimes he defecates depending on the seriousness,” Austine told news.com.au.

“His seizures last anywhere from 10 minutes to 15 minutes and even then he can’t come-to properly for another 30 minutes after that.”

She added the seizures happened about once a month but there were “no tell-tale signs” of warning.

“Drake doesn’t leave my side nor am I game enough to test the theory, he is such a beautiful natured very stubborn boy who wouldn’t hurt a fly, he just needs another chance at life,” she said.

While she appreciated the letter’s author was hoping to help Drake, she wished they had gone about the situation differently.

“I just wish you had a conversation with me to get to know him and the situation before judging me so bad,” she said.

“I don’t want to leave my house again.”

Austine was midway through having Drake registered as a support animal, but said anxiety-triggered bowel accidents had made the process difficult.