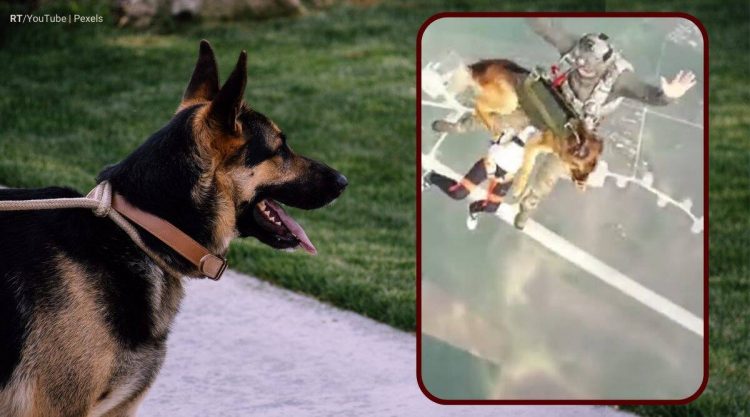 While canines have been part of police and defence forces for years, helping personnel in many operations, Russia seems to be taking it up a notch. The country is testing if dogs can fly out of a plane with a parachute! Now, the spectacular footage of their first test landing is going viral, impressing netizens around the world.

A Russian state-owned aviation company showed dogs testing newly developed parachutes, designed for dropping a person, along with a service canine, in places where it’s impossible to land a plane or a helicopter, RT reported. Technodinamika, part of the Rostec State Corporation, created the device on the orders of Russia’s Ministry of Defense.

Footage broadcast on state media showed a German shepherd flying from 13,000 feet and making a soft landing in an open field. “Four-legged law enforcement officers are often involved in military and rescue operations, but sometimes it takes too long to reach the destination on foot and it’s impossible to land by helicopter or plane,” the company said in a press release.

Test parachutists Yury Mironov and Andrei Toropkov said the test subjects “felt good” but had to undergo additional preparations, according to Moscow Times. “We didn’t know how their bodies would react,” they said adding that ahead of the eight jumps the four-legged parachutists performed, they were not fed or given water for some time.

Although the test parachutists admitted that the dogs got tense when the door opened and they experienced “wind and noise, but they calm down thanks to the dog handler.”

Russian aircraft equipment manufacturer plans to launch a parachute system for service dogs by next year, TASS reported. “We are planning to complete the state trials at the Russian Defense Ministry’s State Flight Testing Center this year. Next year, this system will be actually accepted for deliveries to the Defense Ministry,” the chief designer Alexei Kozin was quoted.

“The preliminary trials have not revealed any deviations or negative results. A dog behaves adequately after an air jump and is ready to accomplish assigned tasks upon landing,” the chief designer said. The airdropping system for dogs will be unveiled to the public at large at the Army 2021 international military and technical forum, the report added.

The manufacturers also added that it is working on doubling the maximum altitude for dog parachute jumps to 8,000 meters with special canine oxygen equipment support.