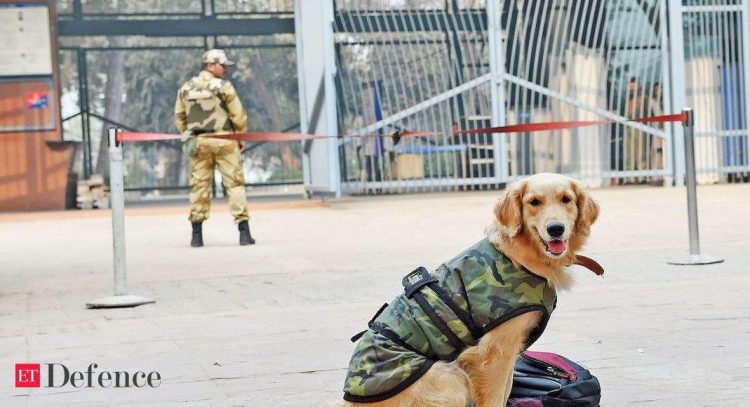 Combat dogs of the central armed police forces (CAPFs) will now undergo an annual evaluation exercise to assess their efficiency and suitability for their specified tasks like sniffing out suspects, narcotics and hidden explosives, besides patrolling risk-prone areas, officials said on Thursday. The Union home ministry, under whose command the CAPFs like the CRPF, the BSF and others work, has formulated a standard operating procedure (SOP) for the canine or K9 squads of these forces and has directed them to include it in their dog-training curriculum.

Union Home Secretary Ajay Bhalla, while inaugurating the second national police K9 seminar here, said the evaluation process was new, and it has not been undertaken for police dogs till now in the country.

He added that his ministry has tasked each CAPF to identify and conduct trials of at least one local dog breed for future induction into these forces.

Bhalla said Prime Minister Narendra Modi had recently spoken about promoting local dog breeds through scientific means, and the Ministry of Home Affairs (MHA) was working in this direction.

He said the ambit of internal security was widening, the difference between internal and external security threats was getting narrower, and police and CAPF dogs were an effective force multiplier for ensuring safety and security of the troops in operations and also the citizens.

SSB Director General (DG) Kumar Rajesh Chandra told on the sidelines of the conference that the “annual evaluation process will ensure that the effectiveness and efficacy of police dogs is assessed and that will help in ensuring the overall quality of this work force”.

“We are also looking at cost-effective solutions like promoting and inducting local dog breeds as compared to the foreign ones. The high rate of survival and low maintenance and hygiene aspect of the local dog breeds are an advantage,” Chandra said.

The SSB, tasked to guard Indian fronts with Nepal and Bhutan, is organising the two-day seminar that has participants from various CAPFs and the three defence forces.

“We are also looking at initiating a K9 behaviour assessment test for the CAPF pups so that they are deployed for the most suitable task,” Dr P K Chug, consulting director of MHA’s police K9 cell, said.

The behaviour test will determine, in the beginning itself, as to which dog is suitable for what task, like one canine can be good for patrolling, while the other could be good at sniffing, another senior officer said.

“The dogs who fail the annual proficiency evaluation test will be put through the grind again, and the results obtained by them will place them suitably for a specific or dual purpose task,” the officer said.

The CAPFs and state police forces deploy dogs for a variety of roles like detecting explosives and narcotics, tracking, infantry patrol, guard dog, avalanche rescue, mine detection and search and rescue.

The seminar will also discuss the subject of “dual purpose police K9 in augmenting police security”.

A dual purpose police dog can do both patrol and detection work along with some basic scouting and sentry duties to safeguard their handler (soldier) and the combat unit behind them.

The nearly 10 lakh-strong CAPFs include the CRPF, BSF, ITBP, SSB and the CISF, apart from the NSG and the NDRF, and they are deployed for rendering a variety of duties in the internal security domain of the country like border guarding, counter-terrorism and counter-insurgency operations, anti-Naxal combat and upkeep of law and order.

Training a dog to ‘leave it’ can help with unwanted barking

Dogs and Kids Are ‘In Sync,’ Study Shows | Health News

Dogs and Kids Are 'In Sync,' Study Shows | Health News