‘Captain’ Completes Training with Capitals and is Matched with Veteran 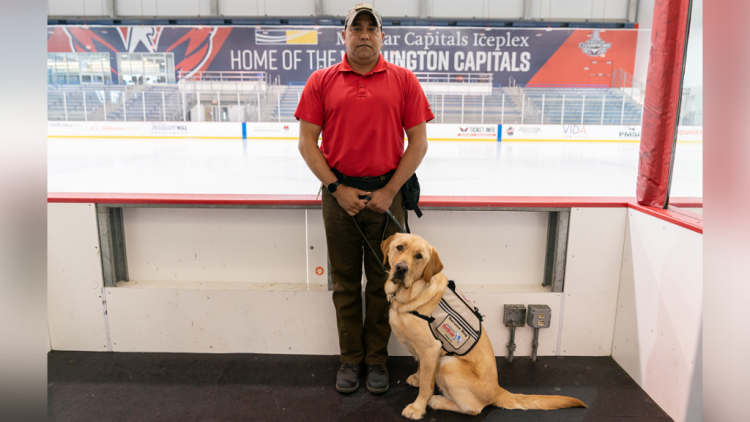 Captain made his debut with the Capitals as a 10-week-old puppy during the team’s Rock the Red Carpet event on Oct. 5, 2019, and underwent basic training and socialization with the Capitals staff, players and public while being raised by America’s VetDogs area coordinator Deana Stone. The Capitals hosted Captain in the front office, at community events, practices and select home games to assist in raising Captain to be a confident and calm service dog. Following his puppy raising, Captain returned to the America’s VetDogs campus in Smithtown, N.Y., to undergo his formal service dog training. Captain began his formal training in February 2021 with Service Dog Instructor Kim Stasheff. The VetDogs’ assistance dog program was created to provide enhanced mobility and renewed independence to veterans, active-duty service members, and first responders with disabilities.

Gwathmey has served the United States throughout the world, including in Desert Storm, Somalia, Rwanda, Liberia and Bosnia. For three years during a stateside assignment he was a member of the Chemical Biological Incident Response Force, which was responsible for the clean-up of the anthrax-infected Hart Senate Building and the two Washington, D.C., post offices after the anthrax attacks in 2001, known as Operation Noble Eagle.

Gwathmey’s first Operation Iraqi Freedom deployment was during the invasion of Iraq in 2003 where he was injured during a building collapse. During his second OIF deployment in 2004, Gwathmey blacked out following a combat mission and was evacuated to Germany for medical treatment. Upon returning to Iraq, and following the siege of Fallujah, he was injured during a combat operation. During a third tour in Iraq, Gwathmey was yet again injured during patrol when a series of IEDs exploded. The percussions from the explosions exacerbated his previous head injuries, and he suffered traumatic brain injury (TBI), which brought on a seizure disorder.

Upon Gwathmey’s medical retirement in 2011, after more than 20 years in the U.S. Marine Corps, he was hired by the U.S. Navy as a disaster preparedness specialist, where he continues to serve his country as a civil service employee.