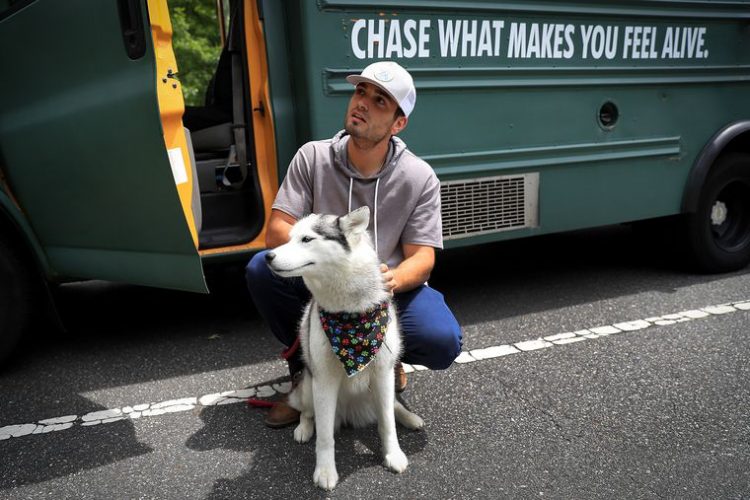 Last year, while Michael Burlotos worked from his Atlanta apartment, he made a jarring decision to jump, or drive, rather, off life’s hamster wheel, to seek happiness among mountain vistas and Walmart parking lots.

Burlotos, 25, chose the #vanlife, a 2003 refurbished Chevy bus from a New Jersey mental health facility, to be exact. “Chase what makes you feel alive” is emblazoned on the side and that’s basically what Burlotos has done for the last year. His Siberian Husky Bailey, went along for the ride too.

“I really fell in love with focusing my life on experiences. That’s a fulfilling life,” the Chester County native said outside his bus on a recent weekday at a Delaware state park. “You hear stories about people on their deathbed saying ‘I wish I could have done this or done that’.”

There’s currently 10.1 million Instagram posts under the #vanlife hashtag, one of the more popular influencer trends in the outdoors from recent years and a lifestyle, as in Burlotos’s case, that boomed during the pandemic. His Instagram account has just over 6,700 followers.

Burlotos grew up in Chadds Ford, Chester County, graduating from Unionville High School in Kennett Square and later West Chester University. In March, he moved to Atlanta for a new job.

“I had never been there before, but I was excited for the new challenge and meeting new people. I’m an extrovert,” he said. “But of course, COVID completely put a cloud over the experience and I was trapped in this apartment with no friends or family around. I remember asking myself ‘What could I do today that my future self would thank me for?’ I had my car, my dog and my Jeep and I figured I’d head out West and see where life takes me.”

There are various levels of “living in your car” and, plainly, some of them aren’t ideal, more last resorts for people experiencing homelessness rather than making lifestyle changes. In the outdoors community, climbers and “ski bums” have been sleeping in vans for decades. Entry-level #vanlife enthusiasts often pick up used cargo vans and frame out beds and cooking areas for a few thousand dollars, though companies from coast-to-coast convert new and old vans alike. In the upper reaches of that lifestyle, there’s recreation vehicles the size of a city bus, replete with leather, with prices close to $1 million.

Across the country last year, sales of RVs skyrocketed.

“People don’t want to fly, they don’t want to stay in a hotel. In an RV, you can cook your own meals and sleep in your own bed,”Craig Kirby, president of the RV Industry Association, told Reuters last year.

The world got an inside peek into one slice of #vanlife in the Oscar-winning film Nomadland, where Frances McDormand plays a widow traveling the country, working and mingling with a collection of nomads who live in their vans.

Unlike McDormand’s character, who found work where she could on the road, Burlotos kept his job in financial technology thanks to an accommodating “work-from-home” policy. All of his days, whether in Wyoming or Washington, began with work and the search for a steady Wi-Fi signal, he said.

The journey began in a Jeep Grand Cherokee, with Burlotos folding the seats down and sleeping in the back with Bailey. He later bought a 1986 travel camper to hitch to the back, giving him more room. A Planet Fitness member, Burlotos was able to shower at locations nationwide. Walmarts allow RVs to park overnight, free of charge.

“I drove straight out to Jackson Hole, Wyoming,” he said. “I felt this whole new rush of life. I was jumping into 50-degree lakes, doing things I’ve never imagined myself doing, but I felt so alive, and I was ending my days by sleeping in the back of my car with my dog and a sleeping bag.”

Burlotos bought the bus in November in New Jersey and has worked on it, continuously, ever since. It has a bed, couch, sink and cooking area, even a compost toilet, but no name. He keeps water, propane, an electric generator, even a firepit for his roof deck in storage under the bed, while pictures of Bailey and his girlfriend, Katie, are fastened to the walls.

Burlotos has visited over 30 states, including Alaska, since he left and was back in the Delaware Valley recently to attend a wedding after a long stay in Florida and South Carolina. He’s hiking Mt. Kilimanjaro in Tanzania later this year.

“The best part about all of this been all the people I’ve met,” he said.

Burlotos is leaving that well-paying job in finance any day now, co-creating a social media platform for entrepreneurs and people who want to “turn passion projects into actual, tangible things.”

“No one can argue with anyone else’s happiness,” he said. “I’m just out there chasing it.”