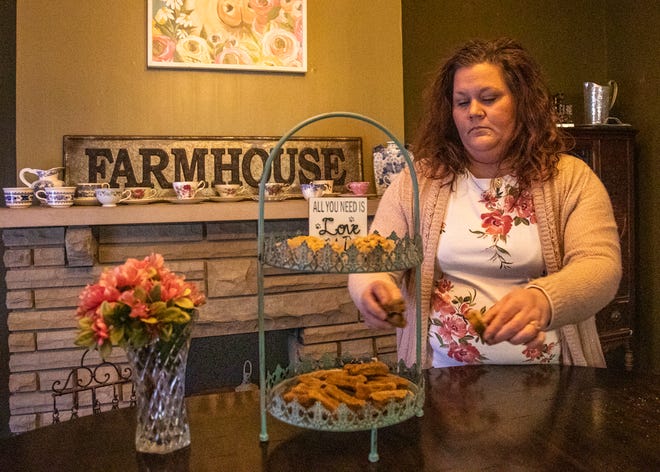 CHILLICOTHE — 2020 was a year that had gone to the dogs. But for one Chillicothe woman, it was the opportunity to launch a new business focused on doing just that.

Heather Lynch always dreamed of running her own company. Five years ago, she had the chance to open her own brick and mortar store, but the timing wasn’t right. Today she works full time as a state registered nursing assistant, a student, and a mother.

When the coronavirus pandemic started, Lynch found herself spending more time at home. There she realized that her own house provided the perfect setting for a business. In November, she launched a venture dedicated to gourmet dog treats: The Honest Dog Bakery.

“It was a crazy year,” said Lynch. “It hit me in the middle of the pandemic, with everything going on, that now was as good a time as any.”

As a child, Lynch discovered her passion for baking. For a time, she considered attending culinary school. Today, Lynch works in a residential care facility but is going back to school to earn a bachelor’s degree in health communication.

Around 2015, Lynch developed a marketing plan and planned to open a storefront. But the opportunity fell through. In hindsight, she’s glad it did.

As the coronavirus pandemic forced many retail stores to close, it showed Lynch she was capable of running a business from home. But before she could create an all-natural product for pets, Lynch had to start with research.

First, she looked at the ingredients used to make dog treats throughout the community. Then, Lynch determined that there weren’t many nutritious and affordable options available. So she started to study various dog-safe foods and learned of their health benefits. Everything came together once Lynch began creating different recipes.

Through The Honest Dog Bakery, Lynch sells biscuits in traditional flavors like peanut butter and banana, blueberry, apple and more. But she also strives to be creative. Each week sales include novel treats like cupcakes, muffins and “woofles.” But regardless of the product, each treat contains all-natural ingredients, according to Lynch.

Lynch has even originated a dog-friendly pizza recipe. While cooking at home, she threw together a few ingredients to make a dough. That was then formed into small circles which baked for a few minutes. Lynch added chunks of sweet potato, cheese and bacon before throwing it back into the oven for a moment. Topped off with a garnish of honey, Lynch said her own dogs went crazy for the treat.

At first, she believed that making dog treats would be easy. But Lynch has since learned the challenges of adjusting to varying demand. For about three months, The Honest Dog Bakery has been operational. In that time, almost 200 people have joined the Facebook group dedicated to the bakeshop.

Lynch announces specialty products and bone flavors at the start of each week. With limited supplies, customers are quick to contact Lynch and place an order. In the future, Lynch hopes to launch a website for customers to use. Someday, she plans to create merchandise like t-shirts or offer catering for canine-themed events.

“So far the customer support has been great and I’m taking time to get everything done well,” Lynch said. “I love being able to say I have my own small business. It will continue to grow, I have a lot of ideas.”

In other business news

Two new businesses on Bridge Street are planning to place signage: both Rural King at the former Kmart building and Gabes, which will be moving into the former Elder Beerman.

Salon Niche has moved to Second Street and MOJO USA has arrived downtown in the upcoming Canal Crossing facility on Mulberry Street, according to the Chillicothe-Ross Chamber of Commerce.

Dollar General has opened a new location in Frankfort and Kington National Bank is working on an addition and alteration project at its Kingston branch, according to building permits.