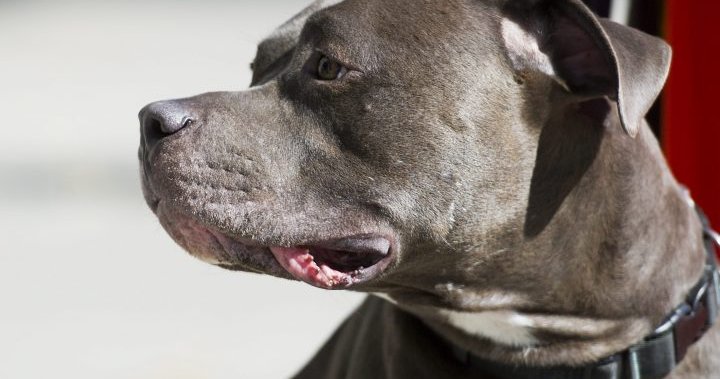 A city committee has rejected a dog owner’s appeal to keep a prohibited breed inside the city, and has ordered the owner to remove the animal from Winnipeg city limits.

In July 2020, the city received a complaint that an American pit bull terrier named ‘Remington’ had attacked another dog at a PetSmart. Video of the incident was played before the city’s protection, community services, and parks committee on Wednesday.

The incident resulted in the city ordering the owner to remove Remington from the city, given that the dog is an American pit bull terrier. That breed, along with Staffordshire bull terriers, American Staffordshire terriers, and predominant mixes of those breeds, are banned in the City of Winnipeg.

Jacqueline Clouse, the owner of the dog, appealed the order. She says Remington is a medical alert service dog, and helps her with anxiety and seizure alerts. She says her dog has no history of aggression, often plays well with other dogs, and even lives with two cats. She also says the incident at PetSmart was her dog “correcting” the other dog.

“Every seizure, every alert, he has been at my side to help,” Clouse told the committee Wednesday.

“He helps me with everyday tasks, simple things that people don’t realize can be quite strenuous to other people.”

Clouse was asking the city to allow her to keep Remington in Winnipeg until July, when they will move out of the city and continue service dog training.

The city had received other reports about Remington, including instances of attacks on other dogs and aggression towards young children and adults.

One of the reports filed to the city said the dog can go from “zero to one hundred” in terms of aggression, and there were also reports of the dog snapping at young children and adults at the mall, in the movie theatres, and at The Forks.

Leland Gordon, the general manager of Winnipeg’s Animal Services, says if the dog attacks someone in a public place, it could put the city in a tight spot.

“(If) a victim then looks at the city and says ‘you knew that person had a prohibited dog and you knew it had aggression issues and it attacked my son in Polo Park’, (it) kind of puts the City of Winnipeg in an awkward position,” Gordon said.

George Leonard, who is a master dog trainer and owner of MSAR Dog Services, also presented to the city committee Wednesday.

Leonard works with police and military working service dogs and is an expert in animal behaviour. He says he has overseen the placement and training of over 4,500 dogs in 13 countries.

Leonard explained to the committee that certain breeds of dogs are better suited for certain lines of work, and service dogs are typically labs, retrievers, or poodles. He also voiced concerns over having a service dog off-leash.

“We have five dogs in the entire country that are off-leash out of 4,500. Being off-leash is very contentious and we do not take that lightly.”

Leonard says he was one of very few police officers to have a pit bull as a working service dog in Canada.

“Pitt bulls are great dogs, they’re great for pets, but they need structure. They need a firm handler. They need an individual that understands dogs, period,” he said.

“When I had my police dog that was a pit bull, you always had to be three seconds ahead of that dog. Always.”

The committee voted unanimously to reject the dog owner’s appeal, and ordered that the dog be removed from the city.

“It is difficult when the appellants do not concede aggression,” Coun. Sherri Rollins said.

The committee acknowledged that while the dog may help Clouse, they cannot overlook its history and city bylaws.

“While I do believe this dog is providing a service to a person with a disability, I’m afraid that the animal isn’t behaving in an appropriate manner,” Coun. Ross Eadie said. “And it is a banned breed of dog.”

1:45
Surrey woman forced to move out of condo because of dog

Surrey woman forced to move out of condo because of dog