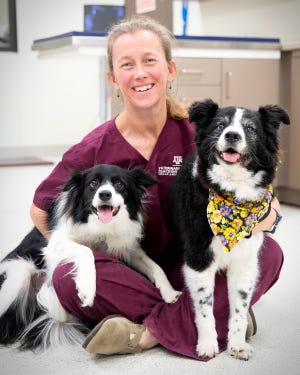 Just as humans may develop neurodegenerative conditions such as Alzheimer’s disease as they grow older, our aging canine friends also can develop dementia, also referred to as canine cognitive dysfunction syndrome (CCDS), a complex of behavioral and neurological symptoms the prevalence of which increases with age.

Dr. Brian Gray Barnett, a veterinary research fellow in the Texas A&M College of Veterinary Medicine & Biomedical Sciences and member of the Dog Aging Project research team, says that as the level of veterinary care we are able to provide canine companions improves, the number of dogs affected by CCDS rises as well. This is because the biggest risk factor for developing CCDS is age, with onset usually occurring between 12 and 15 years old.

CCDS can present itself in many ways, so it is important for owners to familiarize themselves with all possible signs. Many symptoms associated with CCDS may also be indicative of other conditions, so owners should seek veterinary advice to rule out other diseases before concluding that their dog is affected by CCDS.

Barnett says owners can use the acronym DISHAL to remember specific signs to look out for. This stands for disorientation, interactions, sleep-wake cycle changes, house soiling, activity changes, and learning difficulties/memory loss:

· Disorientation: May include staring blankly at walls or floors, getting trapped in corners or behind furniture, going to the wrong side of the door, etc.

· Interactions: May include abnormal interactions with familiar people or pets. This could be witnessed as aggression, irritability, or a change in frequency of social interaction.

· Sleep-wake cycle changes: May include increased sleeping during the day and/or increased difficulty sleeping through the night.

· House soiling: May include urinating or defecating in areas previously kept clean, decreased signaling to the owner when they need to go out, or eliminating inside directly after coming in from outside.

· Activity changes: May include decreased activity, increased time spent resting, and increased repetitive activity such as pacing, wandering aimlessly, and walking in circles. Changes in activity may be triggered by anxiety associated with certain people, places, or situations.

“While any of these signs could be seen as a first sign of CCDS, one study found that disturbances in the sleep-wake cycle were more prevalent in the early stages of CCDS than altered interactions and disorientation,” Barnett said.

Barnett stresses that each dog is different and may have a different progression of symptoms. The first symptoms will typically be milder and worsen as the disease progresses. If an owner suspects that their dog is presenting any of these symptoms, they should bring their concerns to the attention of a veterinarian.

“Their veterinarian will have the best plan to identify the underlying cause of the behavioral changes and find the best intervention,” he said. “This can include treating a contributing medical condition, maintaining a consistent routine, reducing environmental stress factors, introducing enrichment activities, changing diet, and recommending specific supplements and medications when appropriate.”

CCDS is unfortunately a progressive disease with no effective treatment yet developed to significantly reverse its effects. As such, the current standard of care aims to delay progression.

Luckily, veterinary researchers, such as those working with the Dog Aging Project, are hard at work studying the aging mechanisms of our furry friends with the goal of understanding the underlying cause of CCDS to develop better strategies for diagnosis and treatment.

The Dog Aging Project, a multi-institutional endeavor funded by the National Institute on Aging, is the most ambitious canine science initiative in the world.

Led by researchers at Texas A&M and the University of Washington, the Dog Aging Project team will follow tens of thousands of companion dogs for 10 years in order to identify factors that maximize healthy longevity and help future generations of dogs live the best lives possible.

CCDS is one of many conditions that will be helped by this research.

“We are learning more and more about the changes that happen in the nervous system in dogs with CCDS,” Barnett said. “Further understanding not only might allow us to better diagnose and treat CCDS, but we may be able to apply these findings to Alzheimer’s disease in humans.”

The Dog Aging Project is an innovative initiative that brings together a community of dogs, owners, veterinarians, researchers, and volunteers to carry out the most ambitious canine science project in the world. Their work is centered on two fundamental goals: understanding how genes, lifestyle, and environment influence aging and intervening to increase healthspan, the period of life spent free from disease. The Dog Aging Project is a community science project.

Dogs of all ages, from all around the U.S., including purebred and mixed breed dogs, are invited to join the Dog Aging Project. Nominate your dog at dogagingproject.org

Pet Talk is a service of the College of Veterinary Medicine & Biomedical Sciences, Texas A&M University. Stories can be viewed on the web at vetmed.tamu.edu/news/pet-talk. Suggestions for future topics may be directed to [email protected]