How Color-Blind Are Dogs & Why Does Their Visual Spectrum Differ? 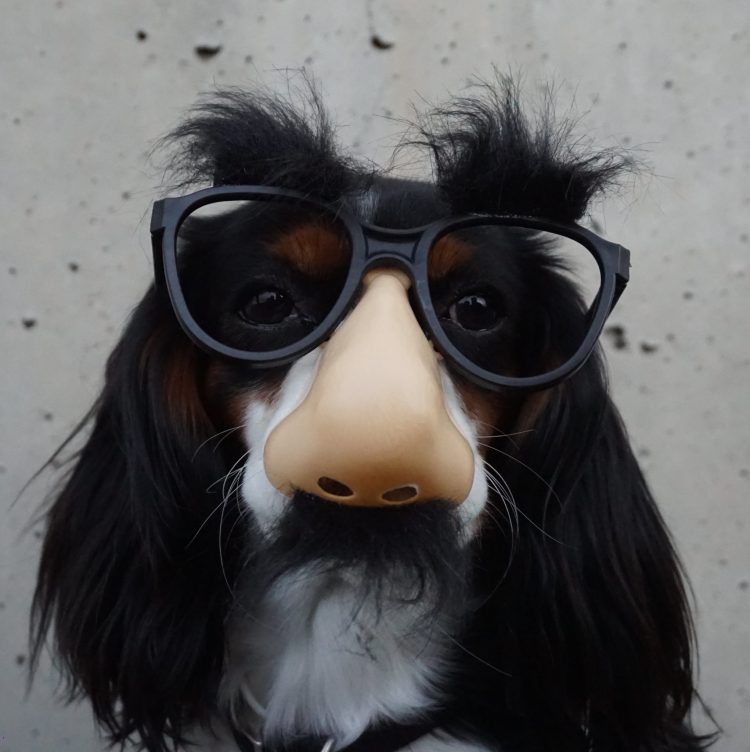 Regardless of what you might have heard, dogs see more than just black, white, and gray and are therefore not colorblind in that sense. However, the color range they are able to perceive is much more limited in 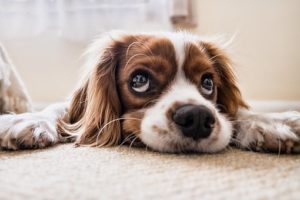 comparison to the human visual spectrum. As Stanley Coren, a renowned psychology professor and dog expert amply put it, “Dogs do see colors, but the colors that they see are neither as rich nor as many as those seen by humans.”

What Is Color Blindness?

The first studies on hereditary color blindness were done by English scientist John Dalton in the late 18th century. Dalton and his brother were both color-blind and couldn’t differentiate between scarlet vs green and pink vs blue.

In humans, the inability to distinguish between red and green is common and arises when a person has defective color-detecting photoreceptors, called cones, in the retina. The retina is a thin layer of tissue found in the back of the eye that changes light into electrical signals which are then conveyed to the brain to form an image.

If you lack some of these cones in your retina, you won’t be able to detect certain light wavelengths and you’re therefore described as color blind. However, you can still make out certain hues. For example, if you suffer from red-green color blindness you can still differentiate between yellow and blue, although the color red will resemble gray or brown much more.

But there’s more to seeing color than just having cones. By virtue of having three different kinds of cones, each capable of perceiving a different wavelength of light, human beings are able to see the full range of the color spectrum.

Writing in his 1937 manual, Training the Dog, Will Judy the founder of National Dog Week claimed that dogs had poor sight, and were only capable of seeing “varying highlights of black and gray.” In so doing he created the notion that dogs are color blind. This misconception was propagated further in the sixties by other researchers’ works which theorized that primates are the only mammals able to recognize different colors.

Canines Have a Limited Color Range 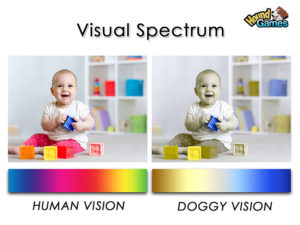 In 2013 a team of Russian Scientists set out to prove that canines not only have a limited color range but can also use their range of vision to discern different objects, to the extent that they could pick them out from a line-up. They tested the sight of eight dogs of varying sizes and breeds in an experiment which expanded on the work of Jay Neitz from the University of Washington. Neitz had previously discovered that dogs have only two cones and can therefore only distinguish blue from yellow, but not red from green – the same spectrum seen by color blind persons.

During the experiment, the Russian scientists printed four pieces of paper in different colors: dark yellow and light yellow, dark blue and light blue. The idea was to test the theory that dogs distinguish between different object based on their brightness levels by using dark and light hues.

In the first test, the scientists took a dark yellow and light blue sheet of paper on one hand, and a dark blue and light yellow color combination on the other, and placed them in front of food bowls locked inside boxes.

Once the scientists were satisfied that the dogs could link the piece of dark yellow paper with the presence of meat, the researchers went ahead to find out whether the canines went for this paper because of its brightness or its color. To accomplish this they placed the light yellow paper in front of one box and the dark blue one in front of another, meaning that if the dogs selected the dark blue paper, the scientists could safely assume that the canines were making choices depending on brightness. But if they went for the light yellow paper, the choices were determined by color.

The researchers concluded that the eight previously untrained dogs made their choices based on color despite the fact that they could have used brightness instead. They concluded by saying, “Our results demonstrate that under natural photopic lighting conditions color information may be predominant even for animals that possess only two spectral types of cone photoreceptors.”

What this tells us is that we can use training aids with different colors as cues for our dogs. But we have to choose colors that will not confuse our dogs like red vs green which our dogs aren’t able to discern.

What Do Dogs Actually See?

Dog experts like Stanley Coren believe that dogs see the colors of the world as basically yellow, blue and gray as depicted in the chart below: 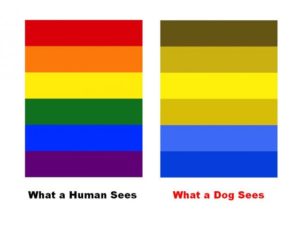 They see green, yellow and orange colors as yellowish, while violet and blue are seen as blue. Blue-green color is seen as a gray.

Interestingly, a number of dog toys today come in red or safety orange colors which might not be that easy for your dog to see. What appears as brilliant red to the human eye may actually just be a dark brownish, gray or probably even black hue to a dog. So the next time you see your pooch ignoring a red colored toy that you just tossed him, it’s not because he’s being stubborn or stupid, it could be because it’s hard for your dog to distinguish the toy from the green grass in your yard. You would therefore do well to choose toys that may not be all that attractive to you, but which highly appealing to your dog friend. 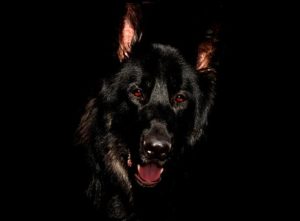 While it’s true that humans have several advantages when discerning different colors and their finer details, dogs happen to have the upper hand in other environments. Canines have developed their senses over time as nocturnal hunters that track and catch their prey at night. Their eyes have adapted to seeing well in the dark by developing a larger lens, cornea and reflective membrane known as a tapetum that reflects light through the retina twice. This is what causes your dog’s eyes to shine in the dark.

Dr. Brady Beale, a veterinary ophthalmologist at the University of Pennsylvania’s PennVet says, “While we do not think that dogs can focus as clearly on close objects, and therefore rely on smell and taste, we know that they are able to see better in dim light.” Dogs also possess more rod photoreceptors which, even though they can’t discern color, are sensitive to light and dark changes, making it easier for a dog to track something at a distance. What this means is that just because your perception of color is better than your furry friend’s, it doesn’t make your overall eyesight more superior.

While researchers are in agreement that all dog breeds discern more or less the same spectrum of colors, there are other aspects to do with sight that differ depending on the dog’s anatomy and size. Dr. Brady Beale believes that “Certainly the perspective differs between a Great Dane and a Chihuahua,” and that the location of the eyes on the dog’s head is different between breeds. For dogs whose eyes are close together and the nose is relatively short, the visual fields of the two eyes have a bigger referred to as binocular vision. The larger the overlap the more information for depth perception is conveyed to the dog. What Can You Do With Your Dog DNA Test? 5 of the Best Reviewed