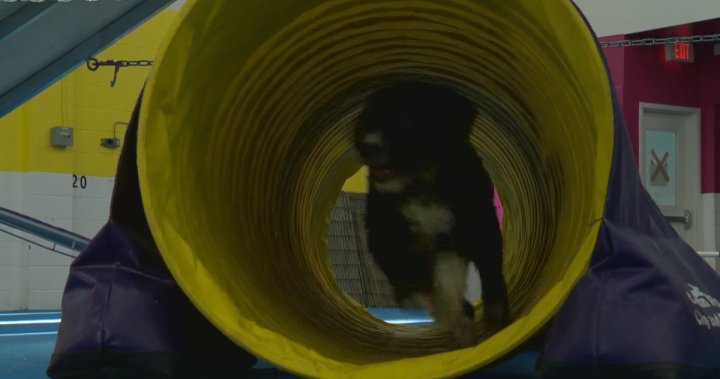 A pet training facility in Calgary has issued a dire warning about the cancellation of puppy classes during the pandemic.

Kayenna Training Academy told Global News it believed the cancellation of group training classes, due to ongoing business restrictions, could lead to more animals being surrendered.

Alexander said her facility used to train between 450 to 500 dogs a week pre-pandemic, but that number has been cut drastically.

“We’re training maybe six a day because we can only book an hour time slot for one dog.”

Alexander said Alberta’s COVID-19 restrictions prevent her from holding group behaviour and training classes. Instead, she can only offer one-on-one training — despite having a 10,000 square-foot facility.

“There’s no physical aspect in our classes,” she said. “Our puppy classes, we’re in chairs, we’re in stations, we’re sitting. We pull one student out at a time to do individual training, then they go back to their spot.”

Alexander added the facility’s agility classes also only have one person running around the room at a time, and they’re wearing masks.

“There’s one person training at a time and the government is labelling us ‘too physical in nature’. But my daughter can go into a 500 square-foot room and have a dance class.”

The Cochrane Humane Society told Global News it is also concerned about the long-term impact of cancelled classes.

“Puppies are at that extremely critical age — at least up to 6 months — where socialization is so important,” Lisa Kedian said. “And not being able to do that, our behaviour team is very concerned that these animals will be coming back through the shelter system.”

The rescue agency hasn’t seen an increased amount of surrenders so far, but is worried that may happen if the pandemic drags on much longer.

“Your dog is going to end up having behaviour issues because they just haven’t been around other people, other environments,” Kedian said. “They just don’t know what’s out there and that can be very scary for them.”

The organization has offered virtual training classes, but admitted it’s not the same. It has now come up with a makeshift option — a training class for puppies — without their owners.

“You drop your puppy off and they stay with us. We’re having puppies come and we’re not having people gathering. So we’re following all the rules.”

“Basically this will just help your puppy grow into the best dog he can be because he’s going to have that socialization with the trainers.”

Global News reached out to the Alberta government with the concerns.

Tom McMillan, the assistant director of communications with Alberta Health told us: “We recognize the impact that the current restrictions are having on many Albertans. We are taking a cautious approach to help prevent the spread and avoid having cases rise once again.

“The emergence and continued spread of variant viruses is being monitored, and a conservative approach is needed to keep protecting the health system we all rely on.”

McMillan did not answer specific questions about pet training, or the possible increase in bad behaviour and surrender of animals.

Alexander said she is not ready to give up, adding the restrictions have not only cost her business but also the clients she serves.

“It’s not feasible for the owner to pay $100 for a 45-minute lesson. When they can take a group class for $200 and get six weeks worth of classes.”

Her hope — the government will realize her group classes are small and ‘very safe’ and classify her facility differently — possibly as retail and not fitness.

“I really just want the government to have the same rules for us as for other business,” she said. “And not cherry-pick.”

Love is in the Air! Against the Grain Pet Food Helps Pet-Parents Give the Gift of Better Nutrition this Valentine’s Day | News

Brain health: Having a dog (or cat) can help reduce dementia risk

Brain health: Having a dog (or cat) can help reduce dementia risk