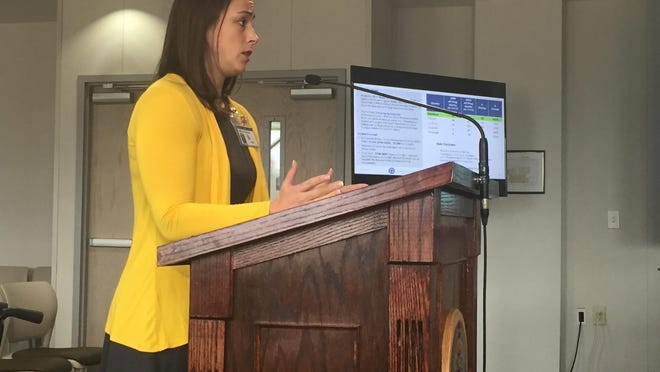 Last year when a resident in Reeds reported they had been bitten by a friend’s dog, a test on the dog came back positive for rabies. At the time, it was the first reported case in a domesticated animal in 10 years, local officials said.

After receiving the positive rabies report, the communicable disease staff at the Davidson County Health Department sprang into action. They worked with the dog’s owners to determine close contacts and individuals to refer to their physician, officials said. Since January there have been 11 positive rabies cases in a variety of animals including domesticated animals such as cats, dogs and cows. Other cases included raccoons and skunks.

But spending for public health has been in the decline for close to a decade in Davidson County. From 2010 to 2019, the Davidson County Health Department spending fell by 17 percent when adjusted for inflation, according to a Dispatch finding.

During that same period, the population served by the local health department rose by 4 percent. When taking that population change into account, the per-person spending fell 20 percent, according to a Dispatch analysis.

“It’s laughable when you consider what we need,” says Davidson County Health Director Lillian Koontz about the meager state funding.

“You don’t necessarily need it to be hitting hard every day,” she says. “But when an outbreak occurs, you need a strong policy and a strong workforce … and we are not adequately funded for that.”

The recent reported rabies cases in the county should serve as a cautionary tale, Koontz said. The situation could have been worse had the owners of these domesticated pets failed to report the cases, she said. More work is needed to educate residents about the dangers of rabies, the importance of maintaining vaccines for pets, and actions residents can take after an encounter with a wild animal.

Currently, the health department is mainly reacting to events as they happen and working hard to prevent the spread of reported cases of communicable diseases. But equally important is educating the community on preventative measures.

“That’s something right now we just don’t have the bandwidth to do because we do not have that consistent funding,” says Koontz.

What’s behind the spending decline?

In 2014, the local health department had 109 full time employees. Today, that figure is 96. That’s mostly as a result of expired federal and state funding grants, according to financial records reviewed by The Dispatch.

The biggest staff cuts occurred in 2016 with the number of full-time employees going from 107 the previous year to 99. That year, 14 positions were eliminated countywide, eight of those were from the health department. Positions that were eliminated that year included five Public Health Nurses, one Nutritionist and one office support staff, according to financial records.

Mary Lou Collett has been with the health department for 25 years. She has done a little bit of everything during her time there. She has worked in clinics and done home visits and case managements.

“I’ve done quite a few things,” she said. One of the lessons she has learned over the years is that you “learn how to do more with less.”.

Because of cuts over the years, staff at the local health department must now take on multiple roles to fill the gap, says Collett, director of Nursing at the Davidson County Health Department. When positions are eliminated, programs and services don’t simply go away especially those mandated ones. It only means that employees will have to take on multiple roles.

“It does put you in a staffing crunch until you learn how to be flexible,” she says.

In 2014, the department closed its dental clinic that had been serving the community for 15 years. The dental clinic provided services for children with Medicaid and Health Choice but was shuttered after “other local dental offices being able to more efficiently provide a wider range of services for adults and children,” said Monecia R. Thomas, the then Davidson County Health Department director in a statement released at the time.

To fill that gap, East Carolina University School of Dental Medicine opened a Community Service-Learning Center on the campus of Davidson County Community College to provide dental care in fall of that year. This center’s main goal was to address the shortage of dentists in rural underserved areas.

Before that, Collett remembers when the department ran a home health agency but that was also sold for similar reasons.

Tobin Shepherd has been a board member at the Davidson County board of health for eight years. He has worked in public health, serving in various capacities, for almost four decades.

Shepherd said he isn’t surprised by The Dispatch findings because federal and state funding for local health departments dried up following the 2008 housing crash.

“In my experience … what we saw was a good 10 years before that spending got back to 2008 levels,” he said.

Davidson County isn’t the only one facing this trend. It’s a nationwide problem.

Health departments have experienced a 16% decrease in funding, according to an analysis by Kaiser Health News. North Carolina is the 14th worst, spending an average of $72 per person in 2018.

In 2010, the Davidson County Health Department ranked fifth in per-person spending among the 52 health departments for which there is complete data. In 2018, it ranked eighth. Across the state, county-level spending on public health dropped 22% from 2010-2018 when adjusted for inflation and the change in population, according to Carolina Data Desk.

Statewide Solution: Can a proposed bill solve some of these problems?

The North Carolina Association of Local Health Directors, an organization made up of local health leaders, is backing a bill that would increase state funding for local health departments across the state. According to the organization, communicable diseases in North Carolina have increased by more than 200% in the last 10 years, while state funding for it has remained stagnant.

In the 2017 fiscal year, the cost of responding to communicable diseases in North Carolina totaled more than $20 million – with the state providing only 4.3% of that total, the organization said in a previously released statement. It’s asking for an additional $36 million to expand local infrastructure for communicable disease.

Local health departments are responsible for tracking about 80 communicable diseases. “And that means the identification of it, the investigation of it, the mitigation and prevention, and the contact tracing,” says Stacie Saunders, president of the NCALHD.

“I think that now is the time that we say commutable diseases are not going away and even before COVID local health departments were responding to emerging diseases,” she added.

Since the time she has been a health director — formerly of Alamance County and now Buncombe County — Saunders said there’s been Zika, SARS, MERS, and Ebola outbreaks.

“It just goes to show that those few thousands of dollars that local health departments get isn’t quite enough to really support the foundation and workforce infrastructure that’s needed for communicable disease,” she said.

“That was a lifesaver to have the school nurses come on board and help with this pandemic,” Collett said.