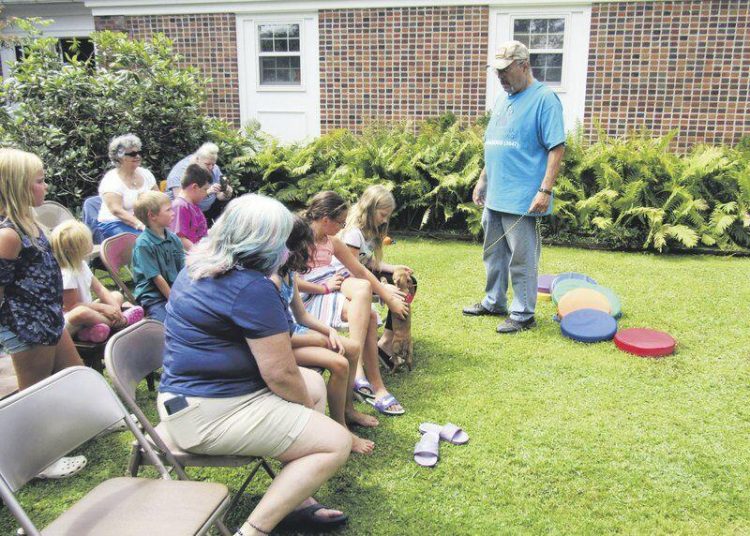 Children sat in chairs or on the lawn during the program at the Delhi library and learned how to approach unknown dogs.

“Dogs greet each other differently than we do,” Rivera said.

He demonstrated by introducing himself to the youth librarian and then shook hands with her. “Dogs, don’t do that,” he said, “they sniff each other instead. When you come upon an unfamiliar dog, let him sniff you before you go to pet him.”

Rivera, who said he has been training dogs for more than 45 years, asked the audience what makes a bad dog. He received several responses, including not being housebroken, being aggressive, nipping, biting, chewing and jumping.

“I get calls all the time from people who have brought home a new dog that isn’t behaving,” Rivera said.

Rivera said Wednesday that he helped a couple train their Tennessee walking hound to not howl when other dogs walk past a window.

He said he brought his dog, Q, along for the ride and when no dogs showed up outside, he took his dog for a walk in front of the window and the dog stayed silent. He said the couple would continue to train her.

“I make you your dog’s trainer,” he said. “I give people the tools and it’s up to them to continue the training. Dogs need to respond to your voices, not mine.”

Parents and children asked several questions during the program, including how to keep puppies from chewing their fingers or hands.

Rivera demonstrated how to stop puppies from chewing on fingers using one of his daughter’s puppies. The puppy wouldn’t chew on his finger, but Rivera showed the attendees that if a puppy was chewing on their finger, to push the finger lengthwise to the back of the mouth to where the puppy couldn’t close its mouth. As soon as the puppy whined, Rivera stopped pressing his finger and gave the puppy some attention.

Rivera said the best way to train a dog is to be consistent with the training, have good timing between the dog doing what you want it to do and giving it praise, and to have a distinctive voice between praise and scolding.

Someone asked if some dog breeds were smarter than others.

“All dogs are crazy smart,” Rivera said. “They are all trainable. In all my years of doing this, there have only been two dogs that I couldn’t train and they were both inbred.”

How do your kids measure up with fitness?

How do your kids measure up with fitness?