Detective who lost a leg in crash adopts dog with prosthetic legs: ‘Just like me’ 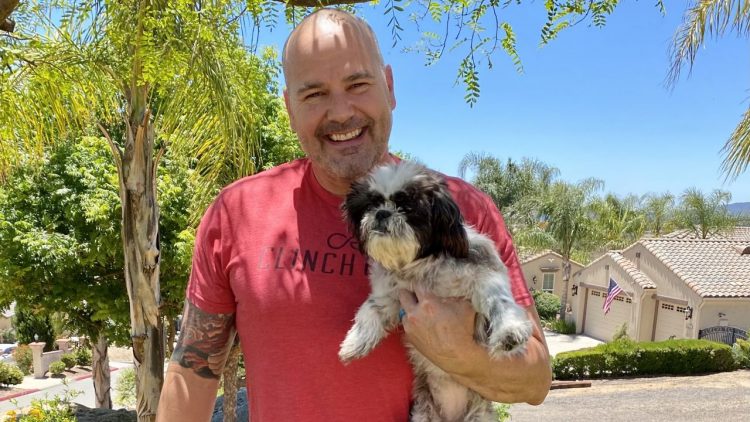 Chappie Hunter and his family found a dog that tugged at their heartstrings.

They adopted Chloe, a 9-year-old Shih Tzu with double-amputated back legs, after a successful three-month fostering run, according to a press release from the San Diego Humane Society.

DEAF SHEEPDOG LEARNS SIGN LANGUAGE TO ROUND UP SHEEP

Chloe recuperated with the Hunters’ support and has been fitted with prosthetic legs by the medical team that works at the animal welfare society’s Escondido Campus.

Chappie Hunter and his family found a dog that tugged at their heartstrings. They adopted Chloe, a 9-year-old Shih Tzu with double-amputated back legs. Pictured here are Chappie, Gavin and Arlene Hunter, Officer Boney and dog Chloe. (San Diego Humane Society)

Chappie says he could relate to Chloe’s challenging road to recovery. The San Diego Police Department detective lost his left leg from a car crash in Alpine eight years ago and has worn a prosthetic leg ever since. After a year of rehabilitation, Chappie was back on the force.

DOG THROWN OUT OF CAR IN OHIO IS REUNITED WITH ITS RIGHTFUL OWNER: ‘ACTIVELY INVESTIGATING’

“[Chloe’s] been through some trauma, just like me. She has her prosthetics, just like I have mine,” Chappie told Fox News. “It’s nice to know that I might know a little about how she’s feeling. But in actuality, she’s the one taking care of me.”

Chappie Hunter says he could relate to Chloe’s challenging road to recovery. The San Diego Police Department detective lost his left leg from a car crash in Alpine eight years ago and has worn a prosthetic leg ever since. (San Diego Humane Society)

Chloe was one of two dogs the San Diego Humane Society rescued on March 6, 2021. SDHS law enforcement officers found her and a 13-year-old Chihuahua named Roxy in a Mira Mesa home, where both dogs had their legs tightly bound with bandages that cut off blood flow. Chloe required partial amputation of both her back paws while Roxy required partial amputation on her left hind paw along with a skin flap procedure.

Dr. Seth Mathus Ganz of Agile Veterinary Surgery performed the surgeries for both dogs. Chloe was fitted with orthopedic slippers to assist her with walking. Roxy is being fostered while she has another month of recovery to go, which includes bandage changes, pain management, physical therapy, and wheelchair- and prosthetic-bound walking lessons.

“Fitting a dog with prosthetics is quite an involved process and this was a first for San Diego Humane Society,” veterinarian Susan Garity said, in a statement for the SDHS. “It included sedation to create a mold of the feet, getting the prosthetics to fit perfectly and monitoring for pressure sores. It takes time for the dogs to learn to use them, but our staff is so dedicated and I am so grateful we had our whole organization’s support in giving these sweet dogs a second chance at some normalcy.”

The San Diego Humane Society’s law enforcement division investigated the home where Chloe and Roxy sustained their injuries and has submitted recommendations to San Diego’s Office of the City Attorney, a chief legal advisor to the mayor.