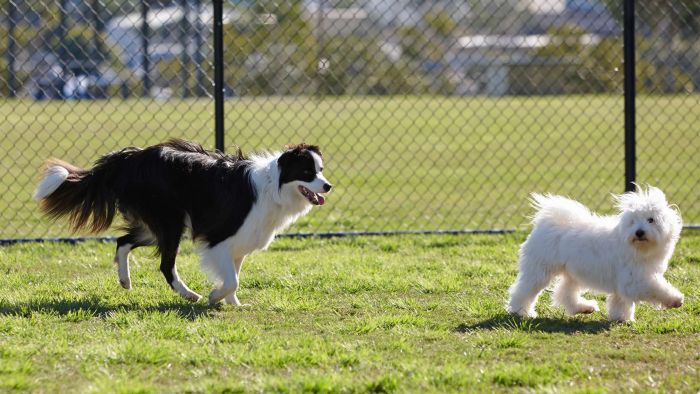 
People reported more than 500 dog attacks to Brisbane City Council in the past 12 months, but experts say attacks could be reduced if dog owners did more to train and understand their pets.

Figures released by the council this week show 540 attacks on people reported in the past year with 65 dogs declared dangerous or menacing.

The council has nine animal attack officers who respond to attacks in progress or investigate if the attack has already occurred. They can also declare a dog menacing or dangerous after an investigation.

But dog handling experts say the risk of attack could be reduced if owners better understood their pets’ behaviour, particularly signs of fear or anxiety.

“Dogs have got an inbuilt warning system. They’ll turn their head away, they will yawn, they’ll try to turn away from whatever’s concerning them,” she said.

“And when that doesn’t work and the perceived threat keeps coming, the warning system keeps going. It becomes a low growl and a lift of the lip, and people ignore that.

“The dog says: ‘I now have no way to flight, the only way left is to fight’ — and the dog snaps.”

Missing our news on Facebook? Go direct to the source — download the ABC News app for all the latest.

Councils may declare a dog to be dangerous or menacing if it seriously injures or threatens a person or other animal, meaning the owner faces a host of restrictions such as paying higher registration fees, muzzling the dog outside the home, and having secure fencing.

A dog declared dangerous could also be seized or euthanased under some circumstances.

The council’s community health and safety committee chairwoman Kim Marx said every report of a dog attack was investigated “based on its own individual circumstance” and with guidance from the state’s Animal Management (Cats and Dogs) Act 2008.

“Council manages dangerous dogs by working with residents to ensure they are being looked after correctly and aren’t presenting a risk to the community,” Cr Marx said.

Owners whose dogs have been declared dangerous or menacing can appeal through the Queensland Civil and Administrative Tribunal (QCAT).

In one recent case, an owner was successful in overturning a menacing dog declaration after a woman was menaced by two dogs while jogging down a Pullenvale street in 2018.

The tribunal ruled the dogs identified by the council and declared menacing were not the dogs involved.

In another instance, a dog was recently confirmed as dangerous on appeal by Brisbane City Council after QCAT originally downgraded a dangerous declaration to a menacing declaration.

The kelpie involved was reported to have bitten a child on the leg in a Kelvin Grove dog park in 2019.

Moreton Bay Regional Council has taken a strong approach against dangerous dogs after a spate of serious attacks on people, prosecuting several owners through the court including one Deception Bay man recently fined $10,000 after a serious attack.

The dog involved, which first attacked a teenage girl and then a council officer, was euthanased.

Ms Scott said it was “very rare” for a dog to show pure aggression, and most dogs were exhibiting high anxiety rather than aggression.

“It’s usually the dog is really, really anxious and it’s the anxiety that causes the dog to fight rather than flight,” she said.

She said the underlying, long-term cause of many issues was simply some owners not taking responsibility for their own dog’s socialisation and training, or not learning enough about dog behaviour to monitor their dog’s mood.

Ms Scott said people might spend thousands buying a puppy, but then skimp on paying a quality trainer, or not train the dog at all, leaving a young dog under-socialised and often highly anxious.

“If my dog bit somebody tomorrow, the first thing I’d be doing is saying ‘Why? What happened, what have I done wrong?’ It’s not the dog’s fault. Don’t blame the dog, blame yourself.”

Jordan Dog Training owner Justin Jordan, also based in Brisbane, said there needed to be more common sense about dog behaviour in general.

He said he fully supported a dog that was genuinely aggressive or menacing being declared as such by the council, and treated with caution and responsibility.

But, he said, a dog might be declared menacing for as little as barking at someone in the street.

“When I talk to people about dog parks, there is a chance your dog will have a disagreement with another dog. Nobody likes that,” he said.

“If you’re uncomfortable, don’t go to the dog park. But if something does happen, rather than going racing off to the council, stop, have a think.

“Was this just a one-off, unfortunate scenario? Is everybody responsible and does everything right? Do we just say” Well, it’s just one of those things that sometimes does happen’.”

Mr Jordan said he believed councils could trial a different system, such as a form of probation for a dog, rather than an immediate declaration.

He said many times incidents were caused by the owner’s lack of attention or investment in training and socialising their pet.

Ms Scott agreed rather than immediately declaring a dog dangerous if it was not a serious attack, councils might have success trialling a requirement for owners to take their dog to a training course.