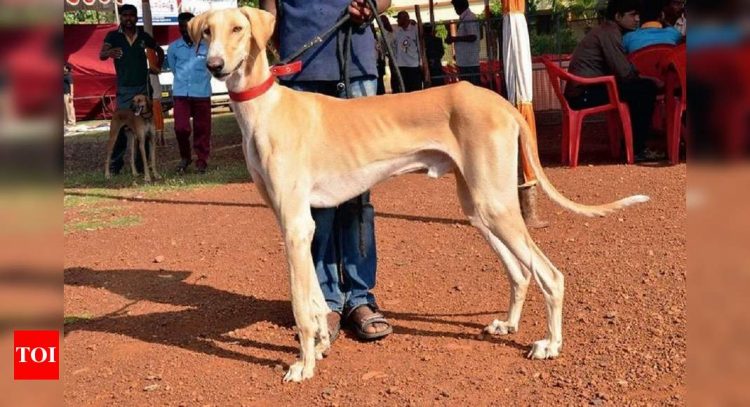 NEW DELHI: Mudhol Hound, the Indian dog breed being eyed by central paramilitary forces for their canine squads and which had found mention in PM Modi’s ‘Mann ki Baat’ address last year, has not been found to be an ideal police working dog breed in trials ordered by the home ministry.
As per conclusions of field trials of the breed conducted by ITBP and SSB on the directions of MHA’s Police K9 cell, Mudhol Hound, though loyal, agile and healthy, is essentially a sight-hound breed with a nervous temperament that tends to get easily distracted by the presence of any moving object, preferring to chase it rather than concentrating on following scent, a key requirement for any police dog.
“This breed doesn’t fulfil the requirement of a police dog due to its temperament and poor trainability,” was the conclusion drawn by ITBP and SSB experts and submitted to the MHA police K9 cell, which is said to have shared it further with the PMO.
Meanwhile, the field trials of three other Indian dog breeds are still underway. While CRPF is doing the trials for Combai and BSF for Rampur Hound, different versions of the Himachali Hound or mountain dog breed – Gaddi, Bakarwal Hound and Tibettan Mastiff – are being assessed by ITBP, SSB and BSF.
Some interesting findings from Mudhol Hound trials — recorded by Assistant Commandant (vet) Pankaj Kumar Teotia from SSB’s Dog Training and Breeding Centre, Alwar and Commandant (vet) Pankaj Kumar from ITBP headquarters in an article published in National Police K9 Journal released in January 2021 — state that the breed has the tendency to forget past training and tends to run away if kept off-leash during training/practice.
ITBP and SSB had inducted eight Mudhol Hound pups in 2018 and after giving them basic obedience and training in detection of explosives and narcotics, deployed them in the anti-Naxal grid in Chhattisgarh and on the Indo-Nepal border. After studying the behaviour, performance and utility of the breed in the field, it was found that the Mudhol Hound is hard to be trained, has less grasping power, is temperamental and always in a hunting mood and essentially a one-man dog who does not take well to strangers, which makes the breed unreliable for police duties. Also, due to its long and narrow head, it can easily remove the neck collar and escape from the handler’s control.

Public health looking for dog who bit child in Stratford

Public health looking for dog who bit child in Stratford