What Is Dog Heat and How Long Is a Female Dog In Heat For? 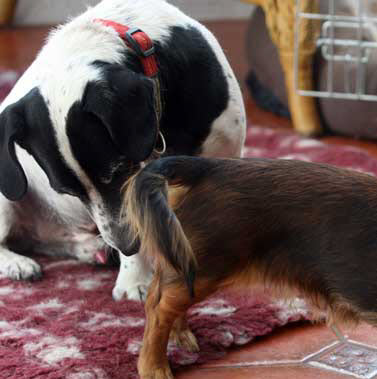 Whenever we hear of a dog in heat we conjure up images of creatures acting in a very awkward to watch manner. But have 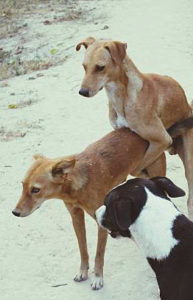 you ever wondered about the chemistry that puts into motion the all-important act of procreation in our canine friends? You might actually be surprised to find out that we have a lot more in common with our furry friends than we care to admit.

Just like humans feel sexy when they’re ovulating, a bitch experiences her heat cycle when she’s ready to mate and become pregnant, an experience she undergoes every six months or so known as estrus.

If your female dog is unspayed, knowing when she’s in heat can help in managing her reproductive cycle. All you have to do is look out for tell-tale signs of changes in personality or loss of appetite and take the appropriate action. Such knowledge can also save you from making expensive trips to the vet for a health diagnosis.

When Does Heat Start & How Long Does It Stay In Heat?

On average, the heat cycle for dogs takes 21 days or between 2 to 4 weeks. The age by which female dogs go into heat varies from as young as four months – in smaller breeds – to about six months old. Some giant breeds take as long as 18-24 months old to enter their first heat cycle. Dog experts generally frown upon breeding of young female dogs during their first and second heat cycle as their ovaries are considered to be immature.

A dog’s heat cycle can be broken down into four stages:

This is the initial part of the heat cycle which can last anywhere from seven to ten days, with most bitches typically going through nine days. Proestrus indicates that your dog is preparing for pregnancy, although she will not want to mate with a male at first.

Bleeding poses a number of challenges for the pet owner, but there are ways you can cope with the situation and keep your home clean. Although your dog will clean herself, you may still find blood spots splattered everywhere especially if she shakes her body. If you have wooden or marble floor, it isn’t too difficult to clean up with a mop, however, if you have a carpet you may want to put towels down for her. 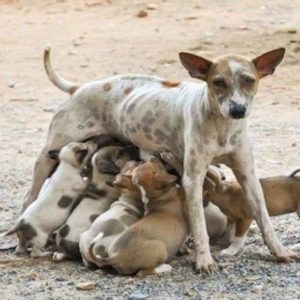 This is the period when the ovaries of your dog begin to release eggs in preparation for fertilization and is similar to a woman’s menstrual cycle, the only difference being that it occurs twice a year.

The fertilization window is relatively small during the heat cycle; it can start nine or ten days after she’s gone into heat and lasts about five days. However, the fact that a male dog’s sperm can survive for up to one week in her uterus, makes it possible for your dog to become pregnant within a few days following intercourse.

Estrus can be a tricky time as your dog is prepared to mate with any male, while every male in the neighborhood is interested in her. If you want to keep her from mating, you may have to take extreme measures such as locking her in the house. Don’t let her out in the yard or leave her on her own, otherwise, she may find an escape route under or over the fence.

The symptoms to look out for during this period include:

Once estrus starts, it may take some time before the heat cycle becomes regular. For some dogs, this can be as much as eighteen months. For dog owners, it’s a good idea to take note of the cycle during these early days.

Diestrus signifies the end of the fertility window in the heat cycle. The uterus walls thicken and in some cases, a dog may even experience false pregnancy during this time. False pregnancy is accompanied by symptoms like enlarged mammary glands and milk production at times.

You can tell it’s the end of the heat cycle by looking out for the following signs:

If breeding was successful diestrus can be prolonged over the 63-day period of the average dog pregnancy.

So long as no pregnancy results from mating during the heat cycle, your dog goes back into the anestrus state, a five to eleven month period of inactivity that finally cycles back into proestrus to start the whole process afresh. The anestrus phase lasts around 15 weeks.

How to Stop the Female Dog Heat Cycle

Unlike humans, female dogs experience estrus for their entire lives, although the period between the heat cycles keeps lengthening as they age. Female dogs, therefore, don’t experience menopause, which is why spaying your dog is so important. Puppies that have been spayed do not go through estrus; but apart from preventing unwanted pregnancies, spaying confers numerous other health benefits to a canine. Not only does it prevent life-threatening conditions like mammary cancer and uterine infections, it also reduces other risks like her running off and getting injured in a road accident when she’s in heat.

Some of the methods you can use to stop the heat cycle include:

If you’d rather not sterilize your dog, you can get a prescription from a vet to suppress her heat cycle. Gonadotropin-Releasing Hormone or GnRH drugs are commonly used and are available as subcutaneous implants or injections. Although they’re highly effective, the drugs do come with some side effects, including enlargement of her tits, behavioral changes, and weight gain.

Unless you intend to use your dog for breeding, you should seriously consider having her spayed before her first heat cycle. Since it’s difficult to tell when this will be it’s prudent to spay a dog before she gets to the age of 6 months. Spaying removes the uterus which reduces the risk of developing pyometra, a fairly common and life-threatening disease of the uterus. It also prevents other complications like perineal fistulas, which are associated with delivery.

Paying attention to signs of dog heat is vital whether you’re breeding or you want to prevent mating from taking place. By understanding and timing the cycle you can prevent an unwanted pregnancy and the diseases associated with it, or enhance the chance of a successful whelping process by your dog. How Often Should You Trim Your Dog’s Nails & What To Do If They Bleed?

Do Invisible Dog Fences Work? 5 of the Best Reviewed

Do Invisible Dog Fences Work? 5 of the Best Reviewed