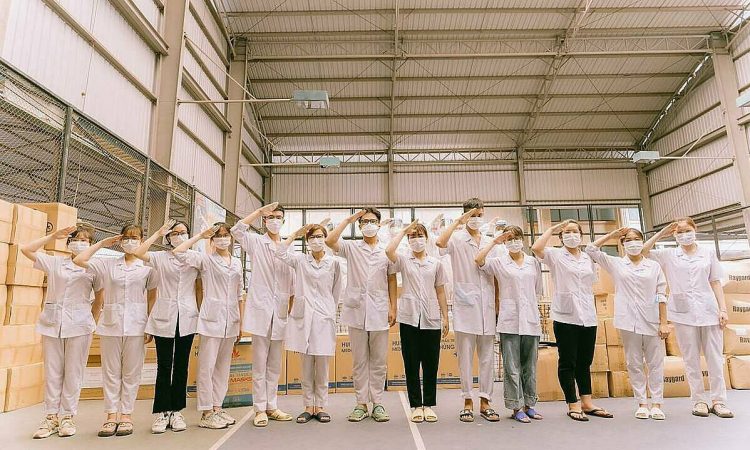 Pham Trung Anh finally completed his shift at 2 p.m. on May 28. The 20-year-old man from the northern port city of Hai Phong was back in his room after spending eight hours continuously collecting samples for testing in Covid-19 hotspot Bac Giang Province’s Viet Yen District.

After getting out of his sweaty clothes, he opened the lunch box that had been prepared by other volunteers.

As a team leader, in addition to getting people tested for Covid-19, Trung Anh also mobilizes members to provide any assistance requested by the Bac Giang Center for Disease Control (CDC).

At 4 p.m., he and others quickly packed their things and moved to collect samples at a different location.

Trung Anh is a sophomore student at the Hai Duong Medical Technical University (HMTU) and this is the second time he has volunteered to help out with the Covid-19 fight. Last time, during the third Covid-19 wave that began late January, he’d volunteered in Hai Duong Province.

“I feel that the new wave is spreading much faster and is much more dangerous than before. The number of infected patients keeps rising. It is not easy. Medical workers are exhausted working in 40 degrees Celsius weather, dehydrated and deprived of sleep,” he said.

Trung Anh and 22 other classmates had got the announcement about volunteer recruitment on the morning of May 16 and signed up without any hesitation.

At 2 p.m. that same day, around 200 volunteers from HMTU headed out to Bac Giang. At 5 p.m. they arrived at Viet Yen District’s Thu Huong Kindergarten, designated as a sample collection center for Covid-19 testing.

Every day, their shifts last from 6 a.m. to around 10 p.m. and they take small breaks in between. Since they have to conduct mass testing, the volunteers don’t have a lot of time to rest. They often take a nap right where they are working, even on the floor, with their protective suits still on.

As the group leader, Trung Anh has more responsibilities. Depending on the workload each day, he wraps up his day at midnight or as late as 2-3 a.m.

“I have to wake up early at 5 a.m. to arrange the equipment and assign daily tasks for everyone. I take my lunch break at around 2 p.m., resume at 4 p.m. and work until 10 p.m. After that, I will go home to eat and clean up until midnight. Then I will check the inventory, make the task list for members in my team until 2 – 3 a.m. before going to bed.”

The team collects tens of thousands of samples every day, not only at the centralized location, but also moving to different communes and villages in the densely populated district.

Sometimes the roads to certain places are very small and cannot accommodate cars. So Trung Anh and his friends are forced to walk or borrow motorbikes from locals. They are quickly soaked in sweat, having to wear protective gear in sweltering heat of up to 40 degrees Celsius.

On May 25, images and clips of an exhausted medical worker who had fainted while carrying out rapid testing went viral online. The incident happened in Quang Chau Commune, Viet Yen District, and the man was Trung Anh.

Even though most of the people in the commune had gone to a centralized quarantine camp, there were still many residents left who needed to be tested.

“Before that day, we would take time to drink water as well as occasional breaks. But that day, I was determined to trace any possible F0 (source of transmission) and F1 (first generation infection) cases left in the community, so I didn’t dare to take off my protective clothing all day.

“I was collecting samples under a metal roof on a sunny day, so I was exhausted. I was feeling a bit dizzy so I sat down to rest for a bit, but I don’t know what happened after that. When I woke up, I saw people had carried me inside,” Trung Anh said.

He recovered and resumed his work the next day, he added.

A set of images of another medical worker with red hands and back that has been widely shared on the internet are of an older student in his school who is also in the volunteer group, Trung Anh said.

“We have to spray alcohol all over the body to minimize the risk of infection. But spraying directly on the skin, combined with working under scorching outdoor, causes irritation and stinging sensation on skin. I also experience those things, but not as serious as his,” Trung Anh said.

Medical workers prepare ice packs and take advantage of a break to apply it on the face and body to cool down.

Every time they get a suspected Covid-19 positive sample, Trung Anh and his friends are sad and worried.

“Where did this person go? How many people did he or she come in contact with? Is the risk of infection high?” These are questions that nag them, more than their own potential exposure to the source of transmission.

“I hope people are aware of the seriousness of the outbreak,” Trung Anh said.

At the end of a long working day, Trung Anh and his friends sit down to talk, comfort and encourage each other. This is a crucial exercise because they have a lot of sad news to share.

When surfing the internet to catch up with his friends, Trung Anh has seen information about other people fainting from exhaustion and even some stories about people who have not been able to return home to mourn after the death of loved ones.

“I just hope everyone has a sense of how serious things are and taking proper preventive measures to protect themselves to limit the spread of the virus. That alone helps us a lot. We really are giving it (the fight) everything we have.”

The 20-year-old student said he was not too worried about getting infected, partly because he has learned how to protect himself.

“Some of my friends in the volunteer group have withdrawn from the mission for personal reasons or health issues. I admit that I do feel tired sometimes, but the thought of giving up never crosses my mind.”

This Dog Is Best Friends With Butterflies | The Dodo | Lifestyle