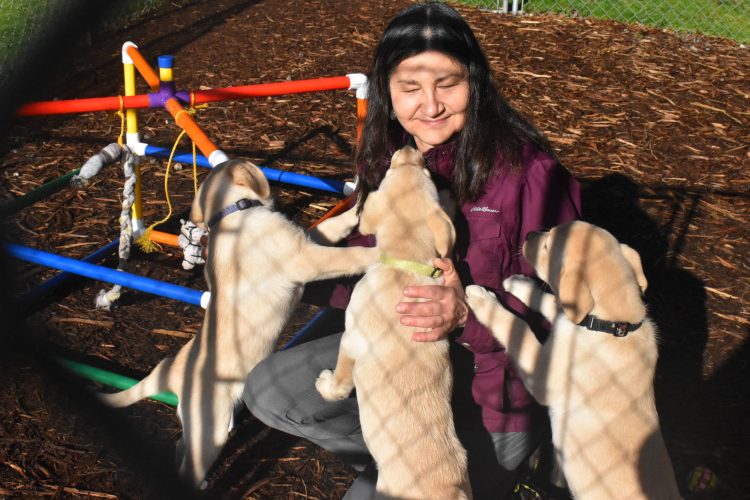 An organization that trains mobility assistance dogs is building a facility on a Jones Road property north of Oak Harbor.

Summit Assistance Dogs’ three-building campus will host dogs in advanced classes, administrative staff and lodging for people with disabilities when they come to pick up their dog.

Meinzinger said she envisioned a campus from the very beginning but didn’t expect it to be on Whidbey Island.

She had been looking for properties in the surrounding areas for years and put in multiple offers. When she saw the property off Jones Road, she was initially skeptical.

“But one by one, everything fell into place,” Meinzinger said.

The organization bought the wooded, 17-acre property in the summer of 2014.

The organization is conducting a $5.3 capital campaign for the campus and recently received several gifts.

The money will be put toward a building called the “Canine Condo,” which is currently under construction. It will host dogs in advanced training.

Puppy litters will also be born there and cared for in the building.

Meinzinger said waitlists for a service dog range between two and five years, and the building will increase the organization’s capacity.

“In order to ramp up our ability to provide services, we needed to get into a building for staff to work in and dogs to live in” she said.

Her goal is to place 20-25 mobility service dogs per year, she said, so the organization needs about 120 dogs in the pipeline of the two-year program.

The nonprofit does not charge clients for the service dogs and most of its budget comes from individuals.

The organization currently relies on volunteer puppy raisers. Volunteers host the dogs in their homes for about a year before they enter advanced training. The puppies need time to develop and for the organization to identify good candidates for the advanced training program. Many dogs do not complete the program and get adopted or go into canine work, Meinzinger said.

Anni Campbell lives in Greenbank and has raised 10 puppies. Two have been placed with people who need them and two are in advanced training. The others were adopted as pets. Her current puppy, a black Labrador named Kai, “looks promising,” she said.

Campbell volunteers in memory of her graduate degree supervisor who had cerebral palsy.

“I realized that if my friend and supervisor had a dog she could’ve lived independently,” she said. “I do it in memory of her because I know that these dogs make a huge difference for people with disabilities.”

She encouraged others to become puppy raisers and said she was the only person on Whidbey doing it. She said she’s excited about the new facility because it will lead to shorter waitlist times for the people who need help.

Brenda Walker lives near Penn Cove and is one of the organization’s board members. She said the building will help the organization further its mission. The facility is permitted for up to 50 dogs. Although some neighbors may be concerned about noise or increased traffic, both Walker and Meinzinger said there would rarely be that many animals there at once.

Meinzinger said neighbors should not be too worried about noise, either.

“We don’t generate a lot of noise. We select for quiet dogs,” Meinzinger said.

The founder is excited about being able to grow into the new space and place more dogs. The organization will likely need more puppy raisers and staff in the future, she said.

“We’re thrilled to be part of the Whidbey community.”

Summit Assistance Dogs is in the process of constructing three buildings on Jones Road in Oak Harbor so the organization has greater capacity to place more mobile assistance dogs with people who need them. These 10-week old puppies will go to volunteer puppy raisers before entering advanced training in about a year and a half. Photo by Emily Gilbert/Whidbey News-Times