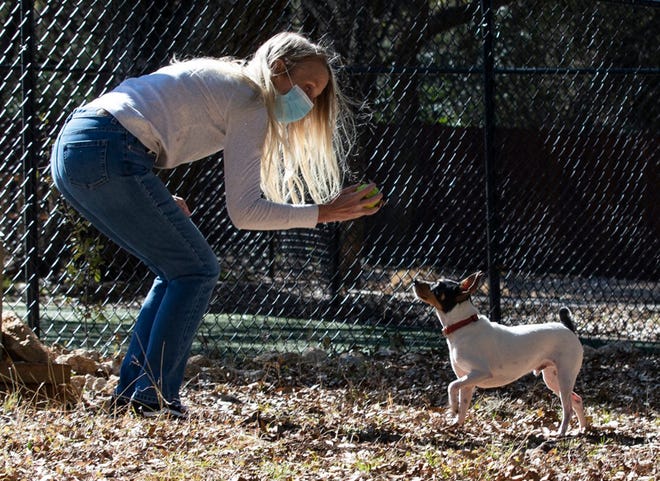 CEDAR PARK — Michelle Stewart held her husband’s service dog, a toy fox terrier named Moby, in her arms outside in the chill on Wednesday in Cedar Park.

She was standing for the first time in the outdoor classroom dedicated to the memory of her husband, retired Air Force Sgt. Michael Stewart, at a canine training facility called the Dog Alliance.

Michael Stewart, a 64-year-old disabled veteran, died of coronavirus on Nov. 22. The Williamson County resident had just started to train Moby at the Dog Alliance before his death, said his wife, who is a dispatcher for Austin EMS.

He used a wheelchair because he had lost both his legs below the knee to complications from diabetes, said Michelle Stewart.

“He would be thrilled about this,” she said on Wednesday, looking at the new driveway, sidewalk and concrete pad at the Dog Alliance. The new features allow veterans who use wheelchairs to do outdoor training without having to navigate the gravel path that was there previously.

Debi Kraker, the founder and owner of the Dog Alliance, said she knew Michael Stewart and decided to dedicate the outdoor classroom to him because he always wanted to help others.

“That’s what’s so hard about him being gone,” Kraker said. “He was always saying ‘How can I help you?’ and ‘How can I get other people involved?'”

Michael Stewart started a social group for disabled veterans with dogs that met at the Dog Alliance once a week, Kraker said. The group later had to switch to virtual meetings because of the coronavirus pandemic.

“I think it was fulfilling for him to be giving back to people in whatever capacity he could,” said Michelle Stewart. “He was a smart guy who was very good at figuring things out. … He built some furniture for a while, loved to build race cars and computers.”

She said she met her husband in Vermont and they moved to the Brushy Creek area in 2003. They have five daughters.

The $50,000 in new construction for the outdoor classroom was all done for free in December by Austin Underground, a utility and roadway contracting company, Kraker said. Rick Vavro, the president of Austin Underground, said he supports the Dog Alliance’s mission, which also includes training dogs and giving them to veterans, as well as providing canine training classes for a fee to those who are not veterans.

Michelle Stewart watched Moby on Wednesday afternoon after he jumped out of her arms and ran in wild circles around the dog park that surrounds the outdoor classroom.

“He has rallied a bit,” she said. After her husband died, Moby spent most of his time lying down in Michael Stewart’s wheelchair, his wife said.