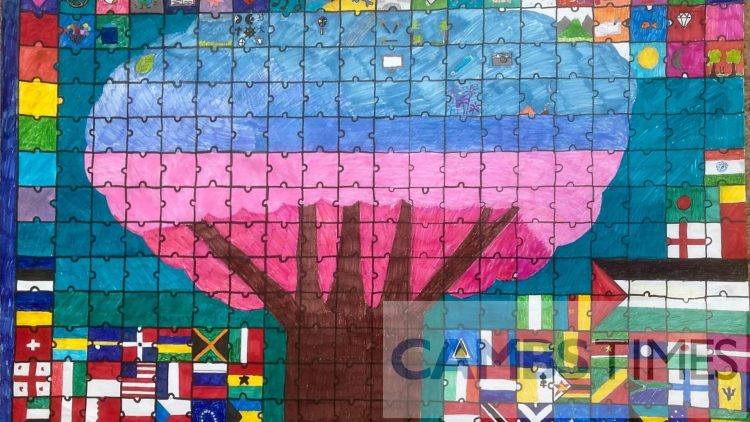 Here’s what our readers have been telling us about over the past week – and there’s a particularly upsetting story from a dog training club.

Despite the pandemic, the annual Lions peace poster competition still went ahead this year, with the theme ‘We Are All Connected’.

Entries were received from all March primary schools, and after careful deliberation, top three posters from each school were presented.

This year, the club also presented one poster as an overall winner in the town, created by Madeleine Chandiwana of Westwood Primary School.

You may also want to watch:

The quality of entries this year was exceptionally high, and we thank the schools for their support in running this competition.

This worldwide competition has been running since 1988, set up by Lions Clubs International, winners are entered into larger heats, with the overall international winner receiving an award, and $5,000.

March Lions Club is a voluntary organisation raising money to support local and national charities through our Gala, Santa’s Sleigh and other events.

We currently meet on the 2nd Wednesday of the month at March Town Hall. If you interested in helping the club or would like more information please contact our club secretary Lion Jenny Webb on 01354 650855 or email [email protected]

Can you find dog club a new home?

This year March Dog Training Club would be celebrating our 65th year but the venue has sadly informed us that we can no longer use it.

March dog club is being displaced from the March community centre, which we have used continuously for the past 16 years.

It is our hope that someone within your readership would be able to offer to us a new venue at which to meet or failing that, provide the contact details of someone who may.

In February 2020 we received a letter to state that community centre had received a £400k grant for refurbishment, which as a club we were extremely excited about.

Unfortunately, we were later contacted to state that, following the refurbishment, the venue could no longer be home to our meetings as it was to become a ‘community creative work shop’ and we were given notice to vacate.

We contacted the community centre to enquire as to whether they may have any other spaces available to us.

They have informed us by e-mail that, under their service level agreement, the community centre cannot now allow dogs (other than guide dogs) into the centre.

We have made efforts to contact various other halls for hire within the March area in the hopes of finding and alternative venue, but with no success

We are a non-profit, committee run Pet dog club. I became part of the committee around 20 years ago.

I initially attended the club to help socialise my then incredibly nervous rescue dog. The club was an was an incredible benefit to my dog and has assisted with the development of my later rescues as well.

With all the recent media reports of ‘Lockdown Puppies’, and how these puppies have not been able to experience basic socialisation skills, we believe that training is now more important than ever.

Having been founded in 1956, I feel that our club is a vital part of the community.

Following the announcement that popular nightspot Mendi’s in Wisbech has been put on the market, people are now sharing their memories of it.

MICHAEL said: “I think anyone who is from Wisbech will have a connection to Mendi’s, both parties, meals out, disco’s, meetings and even wakes.”

“I worked there in the spares department for many years after leaving school.”

MAXINE said: “Had many a good night in there from college parties to mates birthdays, having a meal first then dancing the night away.

“It’s such a shame it’s being sold but I’m hoping the new owners keep it the same as since Covid we’ve missed some good nights out.”

Di said: “The head of WGS stating in assembly that midweek Mendi’s birthday parties were to be stopped… too many hangovers I’d presume.”

PETER said: “Great nights with the business and professional men’s club every month with top speakers.”

BEV said: “Great Christmas works party there, meals with my friends and lots of dancing.”

“Geoff and Steve are lovely people and their father was a gentleman.”

JAMES said: “Too many memories but the one I remember was when a certain someone punched someone on the nose.

“I got covered in blood and got banned for six months!”

MICHELLE said: “I have had some good nights in there, but it was a ‘unique place’

EMMA said: “My friend and I had a joint 18th party there.

After a year away due to the COVID-19 pandemic, the annual Little Gransden Air and Car Show is back, so get the date in your diary!

In its 29th year of operation, the BIG little show that provides entertainment for all the family, will be held on Sunday 29th August at the delightful grass airfield at Little Gransden, Cambridgeshire, not far from Gamlingay.

In addition, a Russian Yak-3 fighter originating from World War II will be making its first UK airshow appearance at Little Gransden.

The show will feature a good mix of and vintage and classic aircraft, as well as a selection of high-energy aerobatics – including a spectacular four-ship formation aerobatic display from the world-renowned Global Stars.

Organised and put on by an entirely unpaid volunteer team, the Little Gransden Air Show started way back in 1992. Since then, the annual event has raised around £350,000 – with all being donated to the BBC Children in Need appeal, as well as to other local children’s charities.

Tickets for the 2021 show are already selling well and are available online at: http://www.littlegransdenairshow.co.uk

News that the Sportsman at Elm had won permission for a larger car park, went down well with some readers.

JULIE wrote that “the pub was there before many of these houses so if you move near to the pub then you can only expect some noise, so stop moaning and move if you don’t like it”.

SAM felt “Something has to be done about the parking; it is an accident waiting to happen down Begdale Road. All the  grass verge is churned up on one side and winter months it’s atrocious

KAYLEIGH-ANNE thought it was much better to have “some noise than the cars parking down Begdale Road and making it impossible to see if there’s any oncoming traffic.

PAMELA agreed. “Surely its better than having cars parked all over the roads”.