Dog training course gets the tail wag of approval 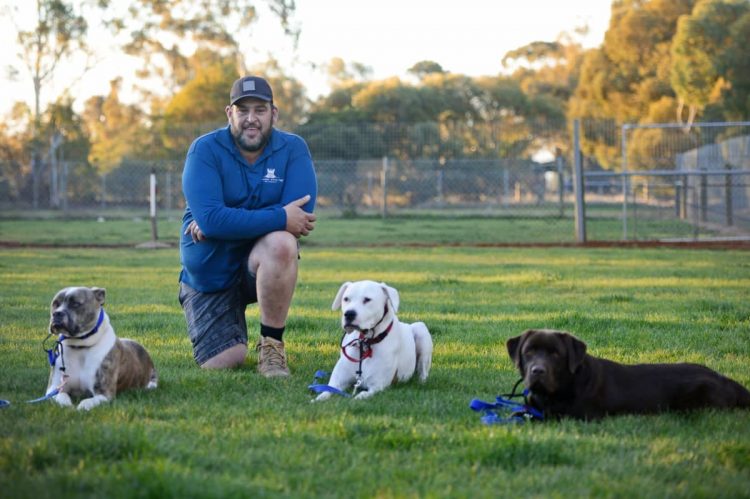 A Waggin’ Good Time Pet Resort at Zeerust offers a course where Mr Hawthorn will take your dog and train it for you as part of an intensive live-in arrangement at the facility.

It can be used for anything such as stopping a jumping dog, getting them to come when called or stopping them from stealing food off tables.

Mr Hawthorn uses alpha training, which was established in Melbourne 35 years ago, where owners are able to control their dog with their voice.

Both positive and negative reinforcement are used.

Already six dogs have gone through the program fully, with another four still in training.

One is run over 10 days where the dogs live at the Zeerust facility on weekdays, but go home to their owners for the weekend.

The other is a 14-day intensive course where the dog spends the entire time at the facility.

As part of the training, the dogs initially start on a lead and halter, but then those are taken away and the dogs respond to voice commands only.

Mr Hawthorn said when the dogs were given back to their owners they were fully trained to obedience level, but the owners then had to continue reinforcing the work that had been done and using the voice commands.

“It’s a lifelong commitment,” he said.

Also one of the owners at A Waggin’ Good Time Pet Resort, Rachel Hawthorn said the dogs were assessed two weeks after they went home to see that there were no problems and the dogs were still behaving correctly.

After that time they graduate from the course.

Shepparton’s Michelle and Ron Parke put their two-year-old cocker spaniel, Holly, through the 14-day course and said they could not believe the difference in her when she was returned to them.

The Parkes had issues with their rescue dog running off and not returning when called, jumping up on people and barking.

Mrs Parke said the change in Holly’s behaviour was “unbelievable”.

“There’s no way she would sit like that. She’d run away,” she said.

“She was a horrible dog.

“I thought she’d be slightly improved (after the training) but not as improved as this.

Mr Parke said while he missed Holly “like crazy” when she was away getting trained, he could not believe the changes in her.

‘Animals just come into your life. You don’t go and choose it.’

This Australian shepherd loves to go canoeing with her owners