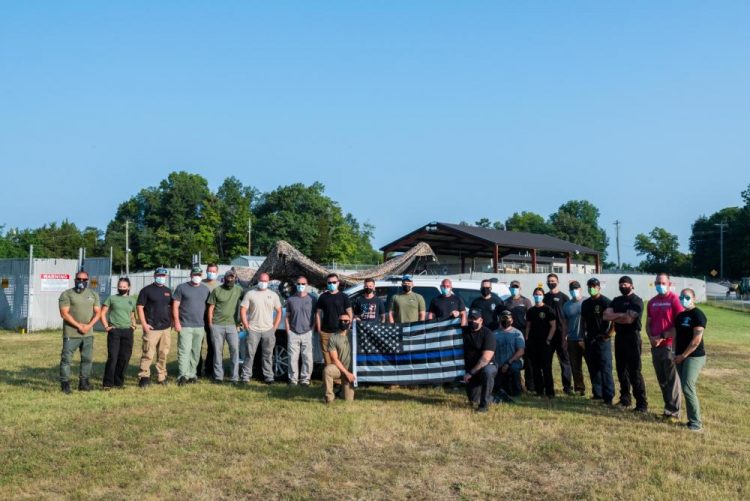 Kennel master Sgt. 1st Class Richard McNulty said by inviting outside officers to bring their dogs and participate in the training, something unique can be achieved.

“It’s shared learning,” said McNulty. “While we do real missions, we focus a lot more on training. They go on a lot of real world calls that we don’t necessarily see in this area.

The difference between what we do on Fort Knox versus metro areas is night and day.”

Along with K-9 handlers and dogs of the 905th, McNulty said officers from Kentucky State Police and the Louisville, Frankfort, Lexington, Richmond and Shepherdsville police departments were all in attendance of the seminar instructed by High Drive K-9, Inc.

High Drive owner and head trainer Scott Clark said after more than 30 years working as a K-9 officer and training others, he’s developed a way of teaching that doesn’t only help everyone become more proficient, it also puts their future development in their own hands.

Over the course of the four-day seminar, Clark said handlers and their dogs were subjected to a wide variety of scenarios they might run into while working in the field, such as going after suspects hiding inside vehicles, on the other side of barriers, or carrying weapons. The dogs are taught how to overcome obstacles to overtake a suspect.

Clark said while a lot of focus is on the dogs, it’s just as important to give those who work with them the tools to improve their roles in the training process.

“We’re basically teaching the handlers how to be better decoys,” said Clark, “meaning working with the dogs, getting in the bite suit, and teaching them how to properly catch the dog so everybody’s safe.”

McNulty said he was impressed with what was achieved over the course of the seminar.

“All the dogs advanced significantly throughout the week,” said McNulty. “[They went] from not wanting to jump over barriers to having no issues.”

Both McNulty and Clark agreed that having multiple agencies attend trainings like this together is beneficial to everyone.

“It’s nice when you bring in different levels of training, knowledge and backgrounds,” said Clark. “They have such diversity from the different types of areas where they work, and they come in and share with each other. It’s nice to see what different agencies are doing so they can modify, take ideas, and help each other along the way.”

According to McNulty, there’s another advantage to working closely together and training with agencies from the surrounding areas.

“There’s a lot of benefits for the future,” said McNulty. “If something ever occurs on [the installation] where we need more dogs, we already have a working relationship with them.”

Clark pointed out the K-9 working dog community overall is very small. For that reason, he said, it’s important they share training experiences and know how one another operates.

“Agencies, whether they’re military or law enforcement, federal or state, have a brotherhood in K-9,” said Clark. “They’re all really passionate about it. I always tell them K-9 is more about what you give than what you get.”

Clark explained 90% of all K-9 unit operations are spent on training because it’s all about being ready. By training, working hard and preparing for any possibility, the officers and their dogs will be able to handle anything.

“The bottom line is we want everybody to go home safe to their families at the end of their shift,” said Clark. “That’s the main goal.”

This work, Fort Knox partners with Kentucky law enforcement agencies in military dog bite training exercise, by Jenn DeHaan, identified by DVIDS, must comply with the restrictions shown on https://www.dvidshub.net/about/copyright.