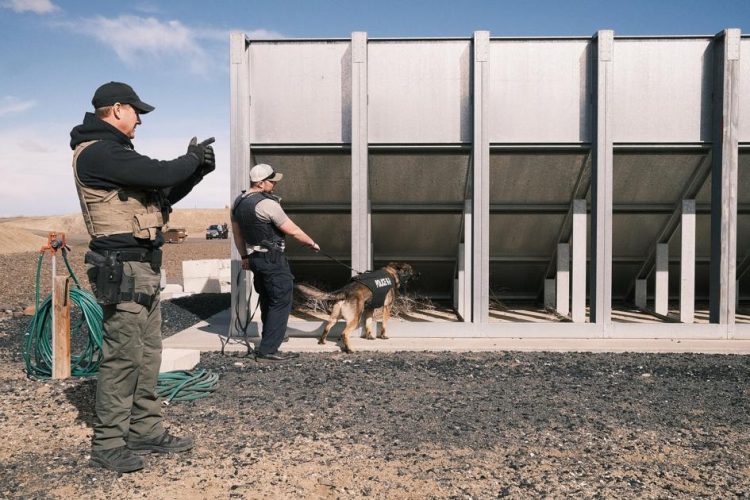 PENDLETON — Under blue skies amid brisk wind, a cadre of K-9 handlers and trainers met Saturday, March 20, in Pendleton. The purpose — train the working dogs that serve Eastern Oregon’s police and sheriff’s offices.

Police resources for training in rural Oregon are limited, so interdepartmental training is a crucial way to pool assets and provide opportunities that resemble real-life situations the K-9 units could run into while working calls.

“There’s good knowledge sharing that occurs with different departments, and how things they have seen in the past add to the experience,” said Noah Robbins, master trainer and owner of Howling Creek in Hockinson, Washington. “It’s a good opportunity to learn from others.”

The training compound, just north of the Pendleton Police Department, hosts a small warehouse, a derelict bus and a firing range. Here, the dogs can train in several tactical situations, such as tracking, apprehension, evidence finding and with real gunfire.

“We have a lot of room here,” Robbins said. “From the dog’s perspective, the more weird (expletive) you can do with them, the better.”

The latter was started in 2014 to train service dogs for veterans and psychiatric patients.

“Our original goal was to educate businesses on what they can and can’t do (regarding service dogs),” Campbell said. “And then K-9 Mick in Portland was killed, and that got us thinking about the law enforcement side.”

Mick, a German-born shepherd, was only a month into his career when he was shot and killed while attempting to apprehend a burglary suspect on April 16, 2017. His handler, officer Jeffrey Dorn of Portland Police, also was shot but suffered non-life threatening injuries.

In Pendleton last week, as the dogs were unleashed from the patrol vehicles — one at a time to keep chaos to a minimum — they made their way around greeting handlers, trainers and volunteers who had come in order to serve as bite or tracking targets. Bali, the K-9 with Pendleton police, jumped up to greet his former trainer Robbins just moments after his release from officer Clark’s police vehicle.

Robbins had set up an interview station for the handlers and their dogs inside the warehouse — a way to bolster social media presence with quick one-on-one interviews that give insight into the life of K-9 units. Afterward, it was time to train.

Darin Campbell, owner of Working Dogs Oregon, was the first to don the bite suit before heading out to hide in the compound. The dense padding made him waddle like an 1980s arcade bad guy through the gravel.

The comically large suits serve to protect the volunteers and trainers from serious injury. Other implements, such as fake limbs, provide a more real-life experience for the dogs, but the suit works well for quickly rotating volunteers through the training.

Molly was the first up, taking direction from Jensen before darting off toward where Campbell hid. The two officers approached with finger-guns drawn. Campbell’s acting was convincing, playing a scared fugitive while Molly barked at the same man she had warmly greeted moments prior.