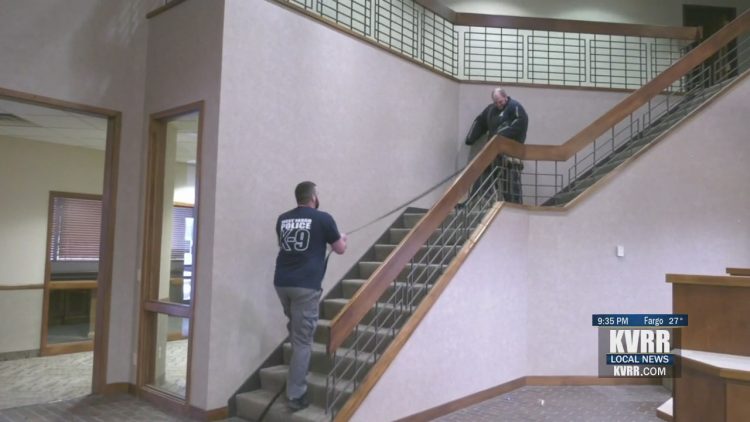 The bank offered up its former building after moving locations

WEST FARGO, N.D. — On any given day several months ago, the Bell Bank branch on Sheyenne Street would look and sound a lot different than it did Tuesday.

“This is rare. I mean, you don’t find a bank that’s open and nobody’s in where dogs can come in here and train,” said West Fargo Police Sgt. Pete Nielsen.

Since the banking team has moved locations, they handed over their empty building to provide law enforcement with an opportunity they and their K9s rarely get.

Ordinarily, the unit would have to train in city buildings they are familiar with.

So valuable that other agencies, including from Iowa and Illinois, are taking part in the drills.

Building searches, dealing with narcotics and catching the bad guys are all on the agenda.

“When the dog comes in here, they get to see different things that they’ve never seen Maybe the taller tellers, the windows, the offices,” Nielsen adds.

It’s a space that more than 20 Bell Bank employees once occupied, and where dangerous situations are possible.

“Something like that could happen in a bank,” said Bell commercial banker Johnathan Donnelly. “So to me, the fact that they’re able to train here in a bank is exciting for us to see.”

Branch manager Kris Hasbargen added, “I never knew that that’s the process they go through, so yes, if we ever had to use their services, I feel confident.”

Collaboration between different organizations across the community, they say, make unique opportunities like this possible.