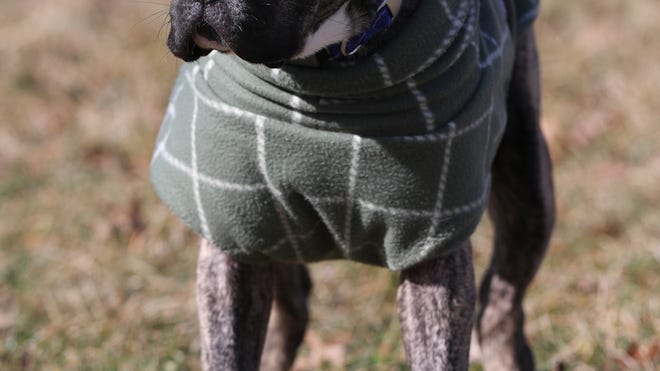 Ethan the dog, who captured the hearts of many in and around Louisville after he was found abandoned outside the Kentucky Humane Society, is facing long-term health issues, his family said in their latest update.

The lingering effects of the starvation and abuse he suffered before being rescued by KHS have caused “numerous lesions and additional brain damage in his frontal lobe,” according to his adopted family.

“These are causing Ethan to have daily seizures and other neurological issues … He is struggling right now, but he has the best care possible,” they wrote in a Facebook update Friday.

‘A part of the family’:Ethan the dog’s journey gets happy ending at adoption celebration

‘Like a different dog’:Ethan the rescue dog reunites with the family that helped save his life

Ethan’s adopted family first shared that he was having neurological issues in early July and said he was undergoing testing, which led to the MRIs that showed brain damage. They said Saturday they “are doing everything we can think of to help Ethan,” including trying prescription medications and homeopathic remedies.

Ethan was severely emaciated and had numerous health issues when he was first found abandoned in the parking lot of the humane society’s main location, 241 Steedly Drive, in late January.

He spent time in the care of KHS veterinarians and an animal hospital before being fostered by humane society staffer Jeff Callaway. The Callaway family eventually adopted Ethan in March.

Since then, they have shared updates on his journey on the “Ethan Almighty” Facebook page. The Callaways have continued to thank those in the Louisville community and around the state and country who’ve rallied around Ethan.

“The outpouring of support is so unbelievable. We are so very appreciative!!” they wrote on the page. “Please keep Ethan and our family in your daily thoughts as we struggle through this very difficult time. And please honor all the wonderful things Ethan has brought to everyone’s life by doing something kind for someone every day.”

Reach reporter Mary Ramsey at [email protected], and follow her on Twitter @mcolleen1996. Support strong local journalism in our community by subscribing to The Courier Journal today.