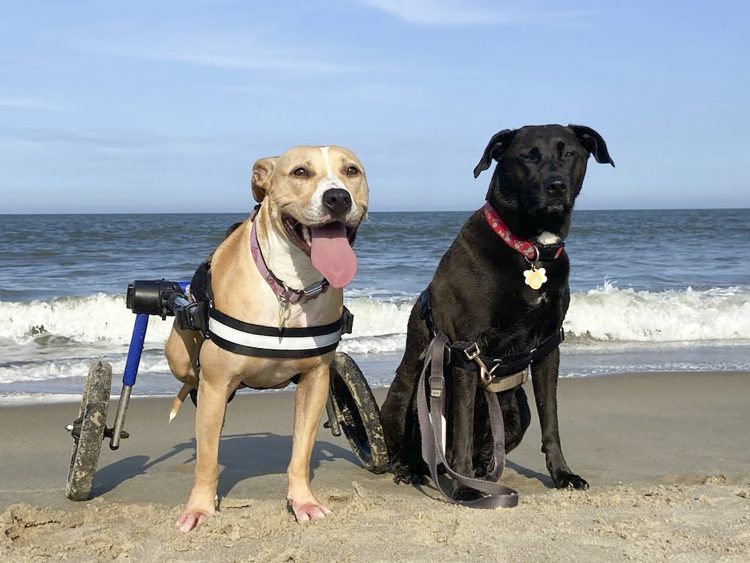 Sylvia is a Pit Bull puppy that was born without the use of her back leg. She was found in a forest in Puerto Rico before making her way to Falls Church last year, when the pup’s rescuer contacted Homeward Trails, an animal shelter and adoption center in Fairfax County that caters to dogs just like Sylvia.

Amanda Craig-Filtrin specializes in caring for dogs and cats that have disabilities, and since she has a relationship of fostering through Homeward Trails, she ended up caring for Sylvia for 14 months before finding her a forever home. During the time with Craig-Filtrin and her family, Sylvia wore diapers in case of accidents, and was fitted for a wheelchair which allowed her to run and play with other dogs.

“I also foster animals in need through Mac’s Mission, which is based in Missouri and has a satellite location near Fredericksburg, Virginia, which only deals with special needs rescue animals, as well as Helping Homeless Felines, a shelter for sick, injured and unwanted cats, and located in Fairfax Virginia,” said Craig-Filtrin.

Craig-Filtrin got her start 17 years ago, before social media and before a lot of the support groups came out, with a little ad in the newspaper about a kitten that was incontinent and only had three legs. Fresh out of high school and attending nursing school, she wanted to find out more about this kitten. She picked up the kitten from a rescuer in Washington, D.C. who was in a house with too many cats and not the best living conditions.

“I didn’t really know what I was getting myself into, especially the incontinent aspect, which was a nightmare in the beginning, because it was messy and I was trying to figure out how to do it,” Craig-Filtrin explained.

Most people that saw the kitten suggested that she should be put to sleep. But Craig-Filtrin had the foresight to see that it was happy considering the disability, and that she was playful and not in any pain.

Long story short, Craig-Filtrin said that the cat wound up living to be 15 years old. She traveled the entire US with Craig-Filtrin and her family while they learned how to “express her bowl and bladder” over the toilet so that there was no mess in the diapers. Essentially, the cat was able to live a normal life, Craig-Filtrin said she just wore diapers in case there ever was an accident.

That experience is what started Craig-Filtrin on her mission of helping disabled dogs and cats and figuring out how to give them the best life that they can possibly have in a home where it’s not too cumbersome for whoever they are being adopted out to.

“The goal is to figure out what the needs are, what bathroom schedule to put them on, so that the person adopting them can see it as a little interruption, and not a big project,” said Craig-Filtrin.

Shelters are often full of dogs and cats in need of a loving home. Unfortunately, those that have disabilities typically have to wait a lot longer to be adopted. The circumstances of special needs pets are outside of their control and they need unconditional love just as much as any pet.

“Anyone who has a special needs case and is willing to network with me, I’m willing to go through their foster program and pull from wherever there is a need,” said Craig-Filtrin. “My niche is with the paralyzed and incontinent, which I’m really good at and know a lot about.”

Craig-Filtrin went on to say there is a skill set that she learned over the years to properly take care of them. Caring for these animals takes a little bit longer, according to Craig-Filtrin, and there are less people willing to do that kind of work.

But she added that she couldn’t do what she does without the help from her family. Even Craig-Filtrin’s nine-year-old son is extremely helpful with feeding and attending to the bathroom needs of some of the cats.

“My family is definitely the rock of the operation,” she said.

This is more than just a goodwill mission for Craig-Filtrin — she lives with two pets that have challenges of their own.
One is her dog that suffers from a lot of emotional issues but the family has worked to get them well adjusted, and they also have a paralyzed cat. Because of that, there is only enough room and time to take on a couple rescues at a time. But when she does find a home for these dogs and cats, it frees her up to care for more with special needs.

Craig-Filtrin said her family recently adopted out a 3 month old Basset puppy named Frankie, who had rear leg paralysis and is incontinent. The trauma that Frankie experienced affects his spinal nerves and doesn’t allow his back legs to work properly, so he doesn’t have control of his bowel or bladder.

The financial aspect really needs to be backed by a rescue organization, because therapy is expensive, Craig-Filtrin explained.

“Almost every dog that comes through is either incontinent or has some sort of paralysis, and needs an MRI or at least a CT scan to see if there is anything we can do,” she said. Sometimes if the dog is just injured, they can be put on crate-rest for 4-6 weeks and given medication, and if for example, it’s a herniated disc, they will recover and walk again.

“I really believe that every dog and cat, no matter what their circumstance, all deserve a happy loving home, and I think that vets who say that they have no quality of life is because that is all they are taught,” she said. “Just because a cat can’t use its back legs doesn’t mean that it can’t get around.”

Craig-Filtrin mentioned that her family’s paralyzed cat climbs to the top of a six-foot scratching post with no problem.

“These animals are very resilient, they are not like us, they adapt and just keep going,” Craig-Filtrin said. “Even though there is a little more work involved, it’s not enough that these dogs and cats shouldn’t have a chance.”