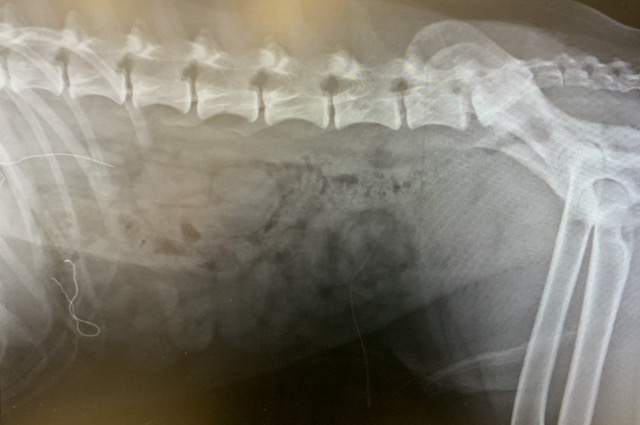 Betsy Kehoe is not sure how King, her 2-year-old Labrador retriever, managed to eat two face masks sometime in mid-October. The dog is always supervised and leashed outdoors, except when playing in his backyard pen in Harvard, Mass.

But when King began vomiting, Kehoe brought him to his veterinarian. Blood tests and an X-ray didn’t initially suggest anything alarming. However, two weeks later, King was still vomiting off and on. And although his energy and personality seemed normal, she got nervous when King began refusing even homecooked chicken.

By the time King was referred to the Henry & Lois Foster Hospital for Small Animals, X-rays revealed two bright lines—suggesting thin pieces of metal—where his stomach met his small intestine.

“We thought these might be from the fitted nosepiece of a face mask,” said veterinarian Catherine Stecyk, V18, a small-animal surgery resident at the Foster Hospital.

An abdominal ultrasound confirmed that King’s gastrointestinal tract was indeed blocked and that, worse yet, there appeared to be what is known as a “linear foreign body obstruction.”

In this common and very dangerous situation—often seen in cats that eat yarn or string—one end of a length of material gets stuck and anchored in the back of the mouth or stomach, while the rest of the material continues to pass through the GI tract.

This eventually causes the small intestine to bunch up on itself like a scrunchie, said Stecyk. It can create a complete blockage or lead to the material becoming so taut that it saws through the intestine, causing life-threatening perforations.

“We took King to emergency surgery, where I felt two wads of material,” said Stecyk. “One was stuck in the stomach and extending into the beginning of the small intestine, causing it to bunch up, and the other one was a bit farther down the intestine. The intestine was inflamed and bruised, but not yet traumatized to the point of perforation, which was really lucky.”

Stecyk was able to gently manipulate the face masks back up into the stomach and remove them through an incision in the stomach.

“It could have been a lot worse,” she said. “Sometimes once we relieve the scrunching, some areas of the intestinal wall can be so damaged that they start to leak. We then would have to remove those sections of intestine and stitch the healthy parts together. Fortunately, King did not need that.”

King has since made a full recovery, and Kehoe said she’s eager to share his story so other dog owners are aware of the potential hazards of face masks. “It’s so important to keep a close eye on your dog, especially if you have one like my Lab, who eats a lot of stuff,” she said. “It literally takes one second for them to get into something they’re not supposed to.”

The Foster Hospital in North Grafton, Mass., has seen 11 dogs that either ate or were believed to have eaten a mask.

With mask mandates in place across the six New England states and increasing nationwide, emergency and critical care veterinarian Elizabeth Rozanski wants everyone to stay safe and wear them—but to be aware of the new risk to pets.

“Face masks are pretty new to daily life for most of us,” said Rozanski. “Some dog owners may be used to their pet being OK after eating a greasy paper towel or pooping out a sock. However, they need to know that cloth masks and the medical-grade paper masks don’t dissolve that quickly, and the ties or ear loops can lead to a dangerous linear obstruction.”

How to Help Keep Animals Safe

Keep your masks out of your pets’ reach. Store clean masks somewhere safe from animals and put your used masks directly in the laundry or trash. “Some dogs like to eat socks or underwear, which is thought to be because these items smell like people,” said Rozanski. “A face mask may potentially have that same kind of compelling odor, as opposed to something like a potholder.”

Discard of masks properly, including while outside your home. “I see used masks all over the place when I’m out running,” said Maureen Murray, V03, director of Tufts Wildlife Clinic. Although she has yet to see a wildlife case involving a face mask, she said it’s only a matter of time. “I’m most concerned about entanglement from the ear loops,” said Murray. “We already treat many wild animals injured from having string or fishing line wrapped around their limbs or from getting entangled in soccer and other types of netting.”

Be mindful of how you store sewing supplies. “I have done a bunch of surgeries on animals—especially at the start of COVID—who ate supplies for making masks,” said April Paul, an emergency and critical care veterinarian at Tufts Veterinary Emergency Treatment & Specialties in Walpole, Mass.

If you know or suspect your pet has eaten a mask, contact a veterinarian immediately. Rozanski said treatment is easiest when a veterinarian can safely induce vomiting soon after the mask was ingested. However, if your pet shows signs they may have eaten a mask while you weren’t looking—vomiting, decreased appetite or refusal to eat, depression—catching it sooner rather than later is always better.

Genevieve Rajewski can be reached at [email protected].