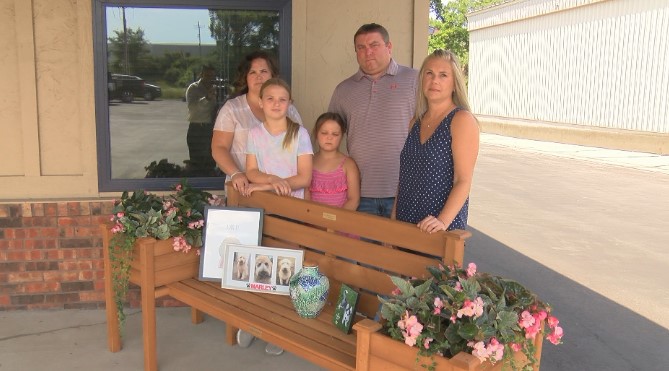 MADISON (WKOW) — Friday brought a bit of closure for Lindsey Davidson. She picked up the ashes of her eight-month-old husky Cooper nearly 11 months after his death.

Davidson had to wait that long because Cooper’s body was being held as evidence in the case against Tammy Flemming, who went by Tammy Olson when 27 News interviewed her last October. In the previous two months, two dogs at died at her training facility, Herman’s Hangout.

While Davidson could finally take Cooper’s ashes home Friday, the case against Flemming is still open.

Davidson, who is from Janesville, and the Petersons of DeForest, met at Pet Memorial Services on Madison’s west side Friday. The Petersons wanted to support Davidson but all involved wanted to also call on Flemming to turn herself in.

Court records in Jefferson County state Flemming has stopped showing up for hearings. Both households have retained attorney Dan Jardine, who said Flemming had initially tried telling the court she was a sovereign citizen and couldn’t be charged by the state.

“The fact it’s not of importance of Tammy to show up is getting frustrating,” Chase Peterson said.

Flemming did not return a message seeking comment Friday and hasn’t responded to messages since the initial October report.

The Davidsons’ one-year-old dog, Marley, died at Herman’s Hangout about five weeks before Cooper’s death. Chase Peterson said he regrets not seeking a necropsy when Flemming told him Marley had accidentally hung himself.

The necropsy for Cooper revealed he died of injuries consistent with strangulation – the dog had red ligature marks on his neck. In the October interview, Flemming defended her use of choke collars although the Humane Society of the United States recommends against the use of aversive collars, such as choke chains. It cites the potential for strangulation because there’s no way to control how much the chain tightens.

The families said they wanted justice; they’ve already each won civil judgements against Flemming but have yet to receive any money from the trainer, who’s since been ordered to cease her dog-training operation as the felony mistreatment of animals case plays out.

Beyond any legal consequences, they said they want Flemming to take accountability. In the October interview, Flemming told 27 News both deaths were “freak accidents.”

“I would love for her to actually look into these two little girls’ eyes and say ‘I’m sorry,'” Megan Peterson said.

Fort Atkinson Police Captain Jeff Davis confirmed Friday police were still looking for Flemming and welcomed any tips people might have as to her whereabouts.