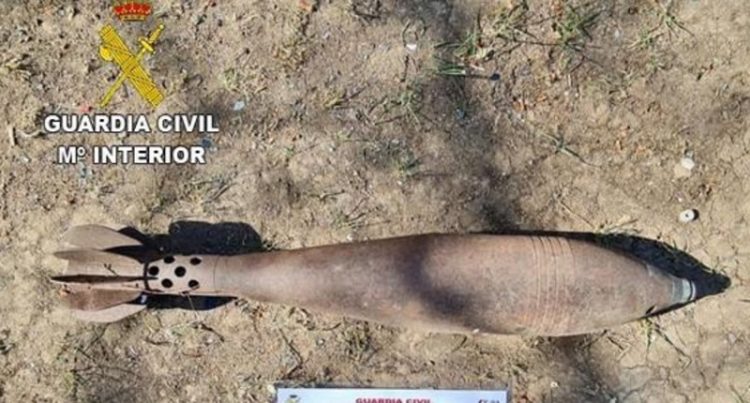 A farmer in the Toledo municipality of Navahermosa – a small village with under 4,000 inhabitants, in the autonomous community of Castile-La Mancha – had a very lucky escape when his dog started digging up what turned out to be a live mortar shell, left over from the Spanish Civil War.

The man immediately contacted the Guardia Civil to inform them of his find, who deployed a team of experts from its Group of Specialists in Deactivation of Explosive Devices (Gedex) unit, the deal with the unusual, but potentially extremely dangerous situation at the farm.

Upon arrival, and on examining the mortar shell, it was found to be in perfect working order, with its explosive charge still intact, and could have exploded at any moment had the farmer not stopped his dog from digging around it any longer than it already had done, miraculously without triggering the explosive device.

On further examination, the dog’s find turned out to be an 81-millimetre-calibre mortar shell, and it then became necessary for the Gedex members to take the device very carefully to a safe location, where it was subsequently detonated.

As pointed out by the Guardia Civil, it is extremely important in the event of discovering any such explosive device, not to touch or to try to handle it, because even though its appearance might be that of an old deteriorated relic, it has the potential to explode and kill or seriously injure you, as the possibility exists that its firing mechanism can be in perfect working order inside, as with the shell dug up by the dog in Navahermosa, as reported by surinenglish.com.

Thank you for reading, and don’t forget to check The Euro Weekly News for all your up-to-date local and international news stories.