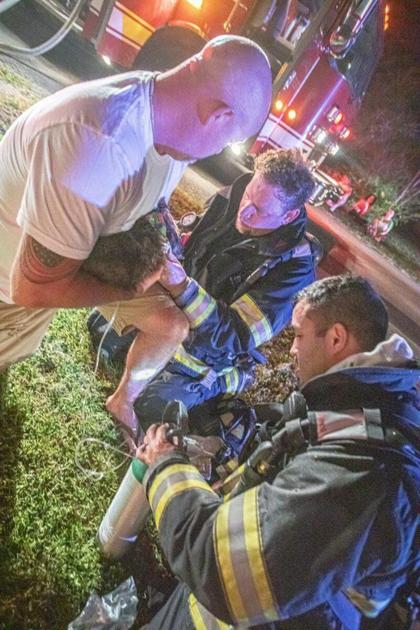 According to American Humane, roughly 500,000 pets are affected by house fires every year, with 1,000 blazes started by pets themselves.

Tahlequah Fire Chief Casey Baker said there is no special training when it comes to pet rescues, but it’s relatively the same procedure as it would be for a person.

Baker said the TFD hosts CPR training every two years, and firefighters typically put oxygen on the animal and do chest compressions, just as they would with a human.

“We’ve rescued a lot of animals out of residences and give them some [oxygen] and get them back,” said Baker. “It’s not that we just don’t go looking for animals, but the main goal is the safety of the firefighters.”

Baker said there are no special oxygen masks for animals, either, other than those used for humans.

“We use a mask that will work, but as far as an animal-specific mask, we don’t have those, and I’d like to look into getting some,” he said. “The masks we have will work, and we’ve saved quite a few animals, actually, but it wouldn’t hurt to have some type of animal training from a [veterinarian].”

According to the American Red Cross, the best practice for protecting pets is to include them in the family escape plan.

“In the event of a disaster, if you must evacuate, the most important thing you can do to protect your pets is to evacuate them, too. But remember, never delay escape or endanger yourself or family to rescue a family pet,” ARC says.

While Baker said he loves animals, he’s still a supervisor, and he isn’t willing to risk the life a firefighter if the situation is unsafe.

“It all goes back to what we teach in grade school: Get out of the house, get your meeting spot established, and let us know if anyone is in the house,” he said.

Baker said pet owners can make it easier on everyone –including firefighters – if they remain calm and pay attention to where an animal is located, if it’s still inside.

“When we get there, they can tell us their pet was last seen in the back bedroom or a certain room, because we don’t know the layout of the house. That’s why it’s imperative that people get out and have their meeting spot so when we show up, they can let us know what’s going on,” Baker said.

ARC advises pets should be kept in areas or rooms near entrances where firefighters can easily find them when they are home alone.

“Typically, animals will go under a bed or try to get as low as possible, and the ones we find are usually under furniture,” said Baker.

A local structure fire claimed the life of a dog on Aug. 10, and Baker said law enforcement officers had to physically stop the owner from entering the blaze to get the animal.

“I believe [Tahlequah Police Department officers] were there first and the owner told them there was an animal inside. He was trying to go back inside and [officers] had keep him from going back in,” he said.