New food trucks have rolled into nearly every corner of the Flathead Valley this summer, vending everything from tacos to hot dogs and specialty soda.

“COVID, I think, definitely had a huge impact on that,” said Amanda Hart, a co-founder of Kalispell’s Rescue Dog. Hart and her husband, Colten, launched their hot dog truck in January.

The roving restaurants are everywhere, from the Sasquatch Grill in Polebridge, to L&L Mobile Cuisine in Columbia Falls, to the Lemon Press in Bigfork.

Their menus are as eclectic as the colorful designs on their trailers. Tico’s Tacos makes authentic Mexican cuisine, while the Uphill Grill specializes in classic Philly cheesesteak sandwiches.

Though the trend isn’t new to the Flathead Valley, there are more mobile kitchens on local roads than ever before. The COVID-19 pandemic was the impetus for many entrepreneurs to set up shop inside the tiny trailers.

In some respects, the food truck fad followed the general influx of new residents that poured in over the past year.

Some food truck operators, such as Andrew Meyers with L&L Mobile Cuisine and Ashley Tronson with the Lemon Press, went mobile and moved to Montana.

Meyers started L&L Mobile Cuisine in his home state of Utah, where he built a following for his multicultural menu featuring a salmon sandwich, a quesadilla and coconut pan-fried noodles.

Meyers relocated to Columbia Falls to live closer to his two sons, Logan and Luke, who happen to be the masterminds behind his unique spice blends.

Tronson, coincidentally another Utah native, always dreamed of living in Montana after spending summers on Echo Lake. This spring, she decided it was time to make that dream a reality.

Based on the popularity of soda bars in Utah, Tronson, her brother Jaxon and her cousin Braiden Lovell built a beverage-only trailer and moved it to Bigfork.

“COVID changed a lot of people’s outlook on how they want their lives to be,” Tronson said. That attitude adjustment spurred the trio of 20-somethings to finally open the Lemon Press.

Others saw food trucks as a route to freedom. Michael Taylor, for instance, opened the Uphill Grill because he wanted out of the traditional brick-and-mortar restaurant industry.

“I’m not an idle kind of person,” Taylor said. “I like to move all around.”

For Taylor, the food truck model makes for a better lifestyle than the monotony of a stationary kitchen job, although he admitted driving across town is more time-consuming.

Taylor is in good company with Amanda and Colten Hart, who have been working inside Rescue Dog seven days a week since the truck hit the road in April.

For the Harts, Rescue Dog seemed like a safe bet after they tried their hands at a few other business ventures.

A food truck seemed adaptable to the restrictions of the pandemic, since it could operate with a small staff and limited person-to-person contact.

The Rescue Dog founders weren’t too concerned about starting a business at a time when many existing enterprises were struggling to stay open, because there seemed to be a definite need for ready-made, high-quality food.

Amanda put it simply: “Everyone eats.”

The popularity of Rescue Dog seems to bear that out. Amanda said she fields calls every day from events and businesses interested in booking Rescue Dog, but she only has time to accept about 50% of requests.

“It has exceeded expectations,” she reported.

There are unexpected challenges, too, with the unorthodox business model.

Tronson at the Lemon Press said it can be hard to find places to park the trailer. Meyers at L&L Mobile Cuisine lamented the difficulty of navigating permits, which differ substantially with each local municipality. And Taylor at The Uphill Grill said he’s recently had to close early because of the heat, since it’s almost impossible to use an air conditioner in a space with a gaping window.

Nonetheless, the number of food trucks in the area seems poised to continue growing.

Based on the interest the Harts have noticed from other potential proprietors, Colten estimated there could be 15 more food trucks in the Flathead next summer.

“We are going to see an even bigger food truck culture,” Amanda agreed. 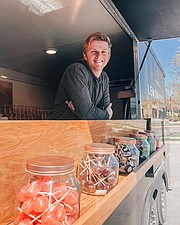 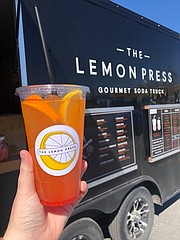