Forbes Dog Training up and running in Bulford 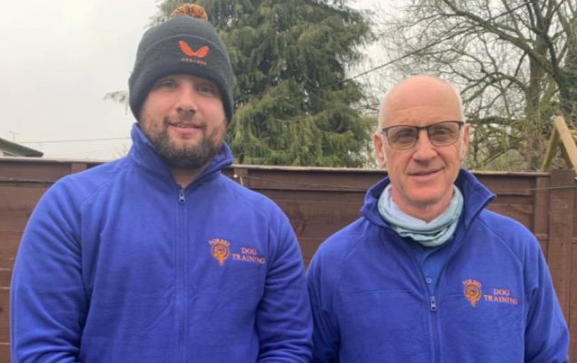 TWO former soldiers have set up a new dog training business in Bulford.

Father and son duo Michael (Spike) and Steve Forbes both worked as dog handlers during their military careers, and are now using that experience to start their own company – Forbes Dog Training.

Spike and Steve (61 and 37), have more than 50 years of military service between them, and more than 30 years of working with dogs.

The business started trading at the beginning of February, and the guys said: “Even we have been surprised at how popular we are, in such a very short period of time.”

Steve has now given his notice to his previous job, such is the early demand on the company.

Until now, Steve had been working weekends and some evenings, while Spike has been working full time, six days a week.

They say they are both dog training “fanatics”, and previously competed in Obedience, Agility and Protection competitions while serving in the Army.

They said: “The competition was fierce and both being extremely competitive, we studied all the latest methods of training to get an edge over our competitors.

“We believe it’s that competition back then that has brought us to where we are now.”

‘Leaders in the field’

Both men had to update their skills to prepare them for this new venture.

They said: “Pet dogs live differently from military dogs, so there was a fair bit of bridging that gap in knowledge required.

“Forbes Dog Training has very quickly established itself as leaders in its field and are achieving a lot of success with the behaviour modification side of things.”

They say they have very quickly “become the go-to company for reactive dogs”.

For more information, go to facebook.com/Forbesdogtraining.

Get more Salisbury news and nominate your local heroes for the South Wiltshire Hero Awards.

If you want online news with fewer ads, unlimited access and reader rewards – plus a chance to support our local journalism – find out more about registering or a digital subscription.

Would you have space in your heart and home for one of these dogs?