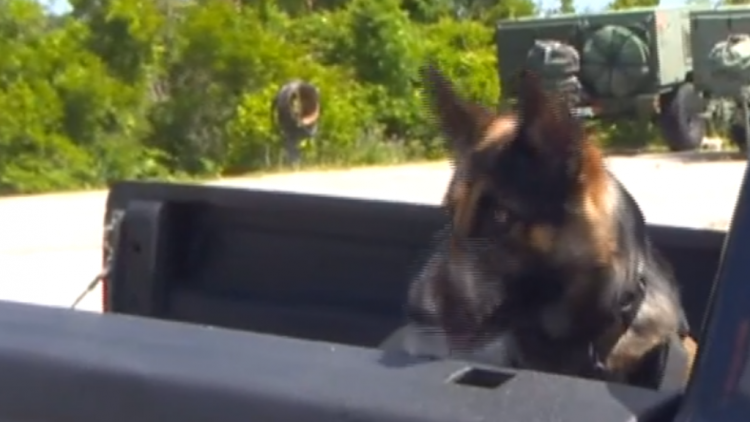 ONSLOW COUNTY, NC (CNN) – A former shelter dog who was once an unadoptable stray is now training to become a K-9 officer in North Carolina.

Liam Collins has the story of Krypto the German shepherd.

“Seeing her change from being so scared and so afraid of everything in life to now becoming, you know, coming out of her shell, trusting us,” Camp Mutt owner Kandi Burkhardt said.

When Krypto first came to Camp Mutt in Jacksonville, Burkhardt and fellow co-owner Josh Forester say it was a hard sight to see.

“In the beginning, we couldn’t even get,” Forester said. “We had to pick her up to carry her to move her from place to place.”

She had behavioral issues. They say that made her practically unadoptable.

The Onslow Animal Shelter brought her to the training center for rehab.

“She was so scared that we could barely get her out of the kennel,” Forester said. “She was just in the corner shaking.”

But now after months of basic obedience, she is training to become a certified K-9 officer with the north topsail beach police department.

“Every day, we come to work and we’re hungry, we’re motivated, like, when I started getting ready for work, she’s in it,” Sampogna said. “She’s super excited, which is nice. It’s nice to have in a dog.”

She is training on finding objects with human scent and detecting drugs with the north topsail beach police department.

They are hoping to complete her training by the end of the summer.

“To see her come this far, it’s amazing,” Sampogna said. “It really is amazing.”

It will make a full recovery for Krypto from her days as a dog who could barely make it out of her cage to an officer with a new leash on life.