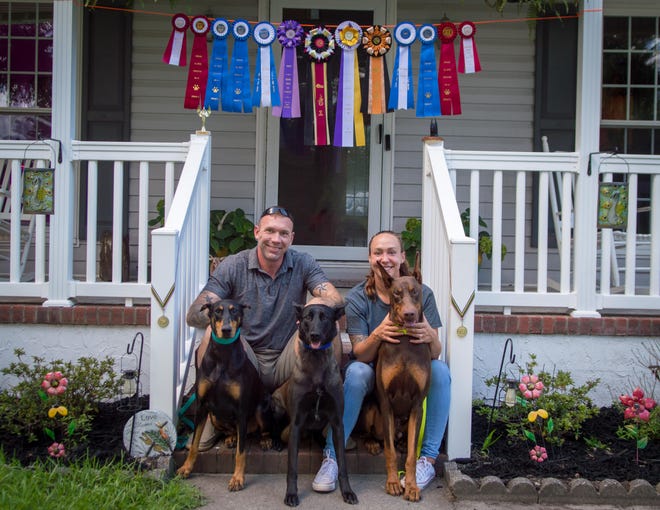 In their spare time, the couple is part of a different community — showing their three dogs: Belgian Malinois, Oakley, and Doberman Pinschers, Mark and Cash.

A native of Clarksdale, Missouri, Master Sgt. Hummer joined the National Guard when he was 17 and transferred to active duty in 2001.

Tech Sgt. Hummer grew up in South Boston, Virginia, with a family who served in the military and joined herself in 2007.

Dog shows weren’t new to Master Sgt. Hummer, who grew up with hunting dogs and is a self-described competitor.

Tech. Sgt. Hummer said she comes from more of the working-dog community.

“I think it’s a really good combination of all of those worlds. It’s a little bit more mellow for our lifestyle with both of us being active duty,” she said.

Master Sgt. Hummer said they started training three Belgian Malinois as protection dogsfor private protection and organizations. But the third Malinois, Oakley, didn’t have the drive for either work or protection.

That’s how they started the dog competitions as a couple in 2019.

“It was more of a transition to try to something else to do,” Master Sgt. Hummer said.

Both are 3 years old, and the Hummers found a male Doberman Pinscher, Cash, who is about 18 months old.

The Hummers found Oakley through the Belgian Malinois working-dog community.

They found their Dobermans from an American Kennel Club marketplace, where breeders are vetted.

The breeders will interview owners and handlers to match with the dog to determine if buyers are looking for a pet-quality dog or a show-quality dog, Tech. Sgt. Hummer said.

All three dogs have competed.

Tech Sgt. Hummer’s first show was with Mark through the International All Breed Canine Association, which is geared toward newer handlers.

She said that at the show, she had Mark’s collar on wrong, and the judge corrected her, but Mark earned a championship that weekend.

Master Sgt. Hummer shows the dogs more at American Kennel Club shows, where he said his tall height helps draw attention to the dogs, as they’re only in the ring for about five minutes before a winner is determined.

Even though he grew up showing dogs and his Belgian Malinois had won Best in Show once and third place in the championship, Master Sgt. Hummer said he was nervous because he was competing against professional handlers who compete in Westminster Dog Shows.

Cash participates in conformation shows and has earned his United Kennel Club Championship, a UKC Best in Show, and legs towards his Grand Championship.

He has also earned his International All Breed Canine Association Championship and cards toward his National Championship.

Recently starting with the American Kennel Club, Cash has won points toward an AKC champion by having two major wins.

He recently started in American Kennel Club (AKC) and has already earned 10 points towards his AKC Championship. Winning one 5pt Major and one 4pt Major Specialty Show.

Oakley has also won Best in Show in a competition and a bronze placing in a Gold Cup Show.

Tech Sgt. Hummer said they are part of the Fayetteville Kennel Club, which sponsors shows for five days each spring and fall in Raleigh.

They are currently preparing for a Labor Day show in Greensboro with Cash, and Mark and Oakley are participating in United Kennel Club shows in the fall.

“Even within those breeds, each dog is handled differently,” he said. “You have a structure how that dog reacts.”

Oakley reacts to squeakers, whereas Mark and Cash are food-driven.

The couple works with the dogs for how they “stack” them or make them stand.

Tech Sgt. Hummer said the handler learns the pace of the dogs to set a stride when moving in the ring.

With the Dobermans, Master Sgt. Hummer said they work to pump the dogs up to keep them alert and energetic.

“You want the judge to see what the breed is really designed to do,” he said.

Belgian Malinois, originally bred as herding dogs, are prone to watching everything around the ring to keep the environment safe, which makes it more of a challenge to keep the breed stationary

“Our Belgian Malinois — as soon as you go to pet her head, she wants to sit down. So we have to work to keep her standing up,” 1st Sgt. Hummer said.

For the couple’s three dogs, Tech Sgt. Hummer does most of the grooming.

Master Sgt. Hummer said the Dobermans are lower maintenance, because of their shorter coats.

Oakley earned her name after eating a two-day-old pair of Oakley shoes shortly after she was brought home, Tech Sgt. Hummer said.

Her full name is Giant Oaks from Tiny Acorns Grow, which comes from the quote that “big ideas are stemmed from a small need or a small idea,” Ma Sgt. Hummer said.

“So marks in the sand like her little pawprints — that’s where her goofy name came from,” Tech. Sgt. Hummer said.

Cash was named by his original breeder who wanted to stick withthemes, because Cash’s mom’s name had to do with time, and the breeder wanted the litter to have names similar to minutes.

The dogs’ registered names are generally long and tied to the heritage of the kennel they came from or a theme of a litter, which lets people in the dog community know where their bloodlines originated without having to look at a pedigree printout, Master Sgt. Hummer said.

More:‘It’s a really cool way to close out your time on Fort Bragg’: Father and son jump together

“A lot of dogs have this elaborate name and they’re not called by any part of that name,” Master Sgt Hummer said. “They have their call name, which is what you call the dog … it’s the only name the dog knows.”

Oakley is the pacer, who always has a toy in her mouth and loves to be outside to walk the perimeter of the Hummer property.

Mark is not an outside dog other than when she eats, drinks and uses the restroom. She prefers being indoors with the air conditioner, Tech Sgt. Hummer said.

Cash is still in a puppy mindset.

“He’s kind of spastic at times and all over the place, crashes into the front door when he comes down the stairs,” Master Sgt. Hummer said. “He thinks he still weighs 8-10 pounds and wants to stand on your chest and look you in the eyes while you’re watching TV. He’s a giant lap dog.”

Outside, Cash likes chasing squirrels and birds and howling at sirens.

“One thing they do all share is — if you have them all in a room together, if one has a toy, as soon as it lets it go or leaves it, one of the other two will go get that toy,” Master Sgt. Hummer said.

Support local journalism with a subscription to The Fayetteville Observer. Click the “subscribe” link at the top of this article.