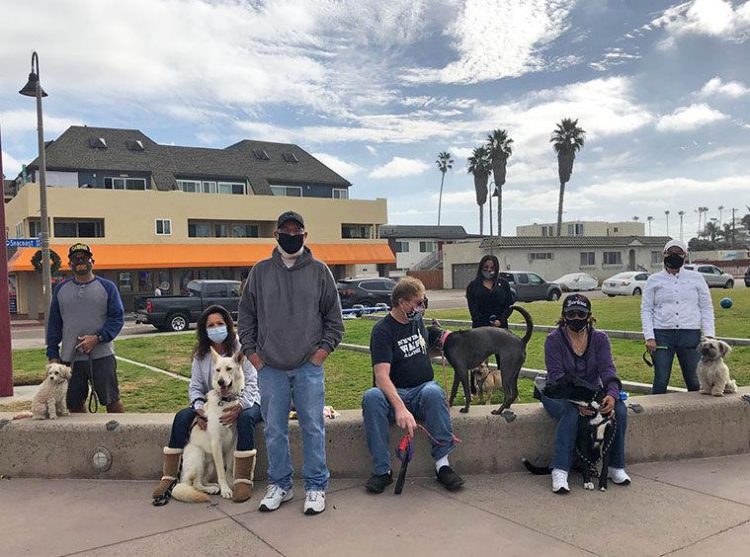 For the past two years Pete Beyer has walked down to Pier Plaza every Sunday morning alongside his dog for a training class. There he meets other dog owners who want to create better bonds between them and their pets. The group can be easily recognized. Owners with dogs on their leashes in various states of good, or not so good, behavior eagerly wait for dog trainer David Lipe to start the class. Lipe has been teaching a free dog training class for the past three years.

Lipe is a very calm and unassuming man who knows how to speak dog language. On a recent Sunday, in a matter of minutes he was able to change the behavior of a dog, who had come to class very excited and jumpy. To dog owners, Lipe is seen as a miracle worker or a dog whisperer – but whatever you want to call him, he knows his stuff.

Lipe grew up in San Diego and moved to Imperial Beach 14 years ago. He always had a way with dogs. When he was a kid, his mother took notice and she told him to train their dogs, which he did, never thinking much of it. As an adult he did the same with his own dogs, again, never thinking this gift would turn into something else. Lipe has a pool and spa business and has come across many dogs in his customers’ backyards, some friendly, some not so much, but has always known instinctually what to do.

“I grew up with dogs. They have always been there for me. Dogs are so amazing. They give you all the love and attention and they are there when you have a bad day,” he said.

In time Lipe learned more about dogs and he said what really made a difference for him was Temple Grandin’s books. Grandin is an author who has written a number of books on animal behavior. “She is more into what does the dog think about a skateboard going by, what is a dog’s perception of a situation… It makes teaching easier when you learn the dog’s frame of mind,” he explained.

Lipe’s goal is not just about teaching good behavior to dogs and leadership skills to humans, but also to teach dogs not to be afraid of other dogs.

Every week Lipe gives the humans at his class homework, to practice with their dogs during the week. When he trains dogs, he likes to understand what motivates them – whether it’s food, love or play and he works with those tools. Lipe puts a lot of focus on the handler as well as what the dog is feeling. “The biggest problem I see is with humans and how they convey their message to their dogs of leadership. People talk too much to their dogs and the [dogs] get confused,” he said.

The free Sunday class starts at 10 a.m. but does not have a set end time. Sometimes it can run 2 or even 3 hours with dog owners staying behind to ask specific questions to Lipe after class. Some dog owners go to the dog park after class and socialize, making it a time for dogs and humans to meet. An added bonus to the class is that participants make new friends.

Lipe explained that IB Pet has sponsored his class by giving him treats and other tools he passes along to the attendees.

Lipe gets a kick out of people when he hears comments like, “You put a spell on my dog.” His biggest satisfaction comes when a dog owner realizes the dog can follow his commands and listens. That feeling of success on the part of the owners keep him going. “What’s really neat and what I had not anticipated, is the owners saying ‘I did it.’”

In the beginning Lipe’s classes focused on walking the dogs. In fact Beyer has a video he took of one the classes that shows a large number of dogs walking in a line to the park.

Beyer found Lipe’s class about two years ago, soon after he got his dog, a Thai Ridgeback named Skylar. “I heard about his class, I felt his energy,” he said of Lipe.

Beyer, who has always been an introvert ,has found that having a dog has helped him become more open to talk to people. “It’s night and day for me. People talk to me when we walk, and in turn, I open up,” he said.

Going to the training sessions keeps the dog and the owner balanced. “I swear by it. I wonder how she would be if I didn’t take her to class,” he explained. Beyer takes his dog everywhere including work, and Skylar is very calm even before the beginning of class when kids were busy in the playground at Pier Plaza and kids on skateboards zoomed by.

Lipe has chosen Pier Plaza for the classes because it’s a high stress environment for dogs – with lots of noises and people. Some people who happen to walk by with their dogs and find out about the class spontaneously join, or come back the following week.

Lipe owns two dogs right now – a Dachshund/Jack Russell Terrier and a Border Collie/Labrador mix. At one point he had puppies and was training nine dogs – not a job for the faint of heart.

Lipe also offers private lessons which can range from $125 to $150 an hour. “Some people can’t afford it. It doesn’t mean they don’t love their dogs,” he said. That’s why he offers free classes and the dog owners give donations for Lipe’s time and freebies.

Lipe is aware from personal experience that the best part about dogs is the unconditional love and trust they have for their humans. He also pointed out that dogs look to their owners for love and guidance.

Lipe simply calls his business “David The Dog Trainer” and apart from private lessons, he also offers dog boarding. He is currently looking at a commercial location where he can board more dogs.

Her dog has improved a lot since starting Lipe’s classes. “I have noticed a big difference at home and when my husband takes him for a walk. We focus on not pulling,” she said.

It was the first time Debbie Trujillo came to class with her 1 1/2 year old dog Ariel and was excited about the possibilities offered by Lipe. “I’m just happy to be with other people with dogs,” she said. “[Ariel] has a lot of spirit and personality. I want to work with her,” she said about her dog.

For more information call Lipe at 619-781-2929 or attend the class every Sunday at 10 a.m. The groups meets by the Surf Henge at Pier Plaza.